We the People Fight Back Conference 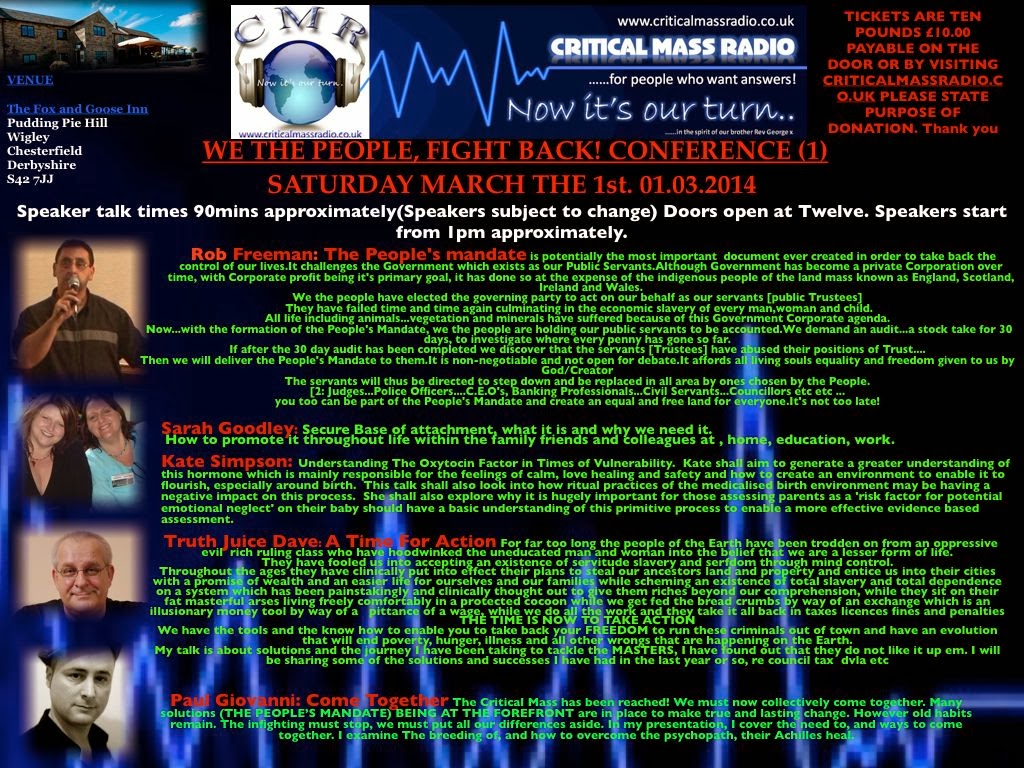 The fifth Critical Mass Radio conference is the third I’ve attended; I missed the last two. This one had a great name, it was called the "We the People Fight Back!" The venue was in a difficult place to reach, but was also by far the most charming place we’ve ever been at, a pub called The Fox and Goose Inn at a place with a fairy tale name, Pudding Pie Hill. This lay just a few miles from at the edge of the Peak District. The pub is a lovely old stone building on the summit of a hill with a magnificent view in all directions and the line of sight from that spot was one of the longest I've seen. The weather was chilly but clear and we sat on a balcony overlooking the valley, the crooked spire of easily visible in the distance. Ustane was with me, which was really nice, and I wasn’t a speaker so I could just relax and enjoy proceedings. We were one of the first arrivals but pretty soon some more of our friends turned up, one by one or in groups, and there was many a happy reunion.

The first speaker was Truthjuice Dave, host of his eponymous Truthjuice Dave Show on Thursday evenings. Like most Liverpudlians he is very talkative and eloquent, as you’ll know if you tune in to his programme. He has found a lot of inspiration for devising a new form of natural law from an unusual source, the Bible. Luke’s Gospel 6-2 describes what a modern court looks like and it is essentially a room full of dead people, not literally, but definitely figuratively. He compares the court to an altar in Church. This makes perfect sense to me because whenever I talk to somebody acting in their official capacity for the authorities, they don’t sound alive. They come across as robotic, lifeless, zombies. The Ten Commandments, the laws about “graven images” and the number 666 are all symbolic of the perversion of our own divinity by the state. Like me, Dave has divorced his statute person, the word “person” actually coming from a word meaning “mask”. He defaced his own “graven images”, the photoes on his passport and driving license, and sent them to David Cameron and the Queen. This is a kind of civil death of the kind Aaron Russo talked about in his interview with Alex Jones, except that he saw it as a punishment the state could inflict on us; I see it as something voluntary that can set us free. Dave’s speech was very thought-provoking and Ustane is writing a poem about it.
Sarah Goodley hosts CMR’s The Irate Women Show every Friday and has spoken at the second AMMACH Conference, see: http://hpanwo.blogspot.co.uk/2013/04/ammach-conference-2013.html. She used a new and interesting comparison and analogy between the world in general and the life of a newborn baby. In a natural and healthy human life everybody has what she called a “secure base of attachment”. For a baby that is parental love; as you get older it includes a loving family, friends and community. However, as is so often the case in our society, anything natural is considered unfit and is broken down in favour of something artificial. Sarah calls this the artificial womb. This is begins in childhood with families broken apart and made dysfunctional by Common Purpose and corrupt social services. It includes the destruction of other natural human social structures in favour of pathological false ones like gangs, the military, schools and workplaces. This is a self-regulating downward spiral of intergenerational trauma. Sarah’s own family has suffered in this way, and so has mine. Is there anybody who hasn’t had this experience? Along with this are environmental factors, what Sarah calls “genomocide”, the murder of us on a genetic level through chemtrails, vaccines, GMO food, Big Pharma etc. This is not accidental; it is a deliberate attack on our lives and our planet. The solution comes from re-naturalizing our world through love and nutrition.
Kate Baxter (not her real name) is still a serving midwife since her appearance at the AMMACH conference with Sarah, although she cheerfully quipped: “I’m hanging onto my registration with my fingernails!” She and I both know how merciless the NHS is to dissidents. She spoke a lot about childbirth and how, like everything else, it has been distorted by the system into something synthetic and damaging. It also carries the implication that babies born are the property of the state, and not sovereign children of their mothers. Kate has delivered babies around the world from poor villages in to the private maternity hospitals of the rich and famous in . She spoke a lot about a hormone called oxytocin. This plays a vital part in childbirth and also in sex. So it is essential at both ends of the reproductive process. A lot of the unnatural plastickifcation of childbirth is a deliberate attempt to suppress oxytocin via modern obstetric and midwifery practices. Also there are many images in the media, like the TV show One Born Every Minute, which portrays childbirth as painful and dangerous. This causes fear and discomfort in labour as well as more cases of foetal distress, and the need for forceps and Caesarean deliveries; I myself was born by forceps. Oxytocin in the hormone of calm and peace. It’s a natural painkiller and regulator of labour. Pregnancy and childbirth in a natural environment should be a joyful experience. Only a small minority of babies really need to be born in hospitals and most could easily be born at home in surroundings that work in harmony with how the human body is meant to function and did so easily over millions of years before it was perverted into something toxic and harmful. Again, this is a deliberate policy of the Illuminati-occupied government. Kate was very funny in her delivery (pun intended) and used props like a teddy bear and fairy lights to illustrate how oxytocin affects the human body.
Rob Freeman bounced around the stage in his hallmark youthful manner, speaking with knowledge and enthusiasm. You can hear him on CMR every other Wednesday at on his Into the Light Show. In this lecture he described a work in progress of his, the People’s Mandate. He hasn’t finished it yet, but he has the preamble worked out. This is basically a lawful and properly formatted notice of potential termination of our social contract with them, unless they can justify said relationship, see: http://criticalmassradio.co.uk/peoples-mandate-rob-freeman-please-read-pass-now-turn/. It reminds me very much of Kevin Annett’s International Tribunal into Crimes of Church and State, see: http://itccs.org/. Rob sees things slightly differently to Truthjuice Dave in that he doesn’t see the system as inherently malign, just the people running it. We can still remain beneficiaries of our statute law persons, even if we resign as their trustees. Rob sees English Common Law as a mental construct and that natural law can only come from nature, or God, depending on your beliefs.

I was very happy to attend this fifth CMR conference and I felt sad to miss the last two. It was wonderful that Ustane cane with me too. We don’t often get the chance to go away together and my friends at the conference were as pleased to see her as they were me. Our station is almost two years old now and has achieved so much; we are now one of the principle truth/alternative radio outlets on the Net. We have endured hardship and tragedy as well. Two of our hosts have died, George of The Prisoner Show and Brian Branche, the Boxing Vicar, see: http://hpanwo-radio.blogspot.co.uk/2013/12/brian-branche-tribute-special.html. Many of us have also been saddened by the departure of Lisa Shunkaha Wanagi of the Cry Freedom Show who is no longer associated with the station for personal reasons; hopefully she will be starting up a new radio show elsewhere soon. However I still think we have a bright future ahead and will progress even further than we have so far, until the day comes when our work is done and we have achieved the critical mass necessary for a true transformation of the world. I look forward to the next conference very much. Many thanks to all the speakers and to Paul Giovanni who organized the event. And also to everybody who attended, filling almost every seat.
Posted by Ben Emlyn-Jones at 17:21

Many thanks for your kind words Ben, was hard not being there but so glad it was a success xxxx

Thanks, Lisa. It was a great day. But many of us still miss you. Good luck with your future radio career :-) xxxx