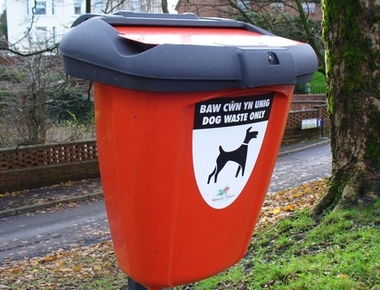 One of the obstacles of urban life is dog... what shall I call it?... "mess". You always have to keep one eye on the pavement as you walk along in case you tread in a foul-smelling and shoe-ruining piece of excrement a dog has left behind. This is also a health hazard for children who can catch diseases from it that can leave them blind and brain damaged. Despite their undoubted high intelligence, their ability to fetch newspapers, assist the police in manhunts and guide blind people across the road, for some reason the simple task of using a humble household water closet is beyond the capability of dogs. However, I've noticed in recent years this problem has eased significantly because of the increased use of "poo bags" and the installation of public dustbins to put it in. Local authorities now impose penalties on dog owners who don't clean up after their canine friends. It's now regarded as common courtesy to pick up anything your dog leaves behind and if you don't do it, even if you don't get fined you'll probably get a scolding from passers-by. As far as I'm concerned that should be the end of the matter... but oh no it's not, we have to bring in DNA scanning! This is currently being trialled in ; but if it's successful no doubt it will spread elsewhere, see: http://www.bbc.co.uk/news/world-europe-26457635. The Neapolitan authorities have brought in a "Pooch Poop Police" department which will take a DNA specimen from any dog caught fouling a public highway and store it on a database. This means a dog and its owner can have a record file created to monitor how many times they commit this offence and prosecute them as appropriate.

You might ask why this is a bad thing? After all, it will make the urban environment much safer, nicer-smelling and more hygienic. However, the concern is that this practice could be used as a pilot scheme for something more sinister; DNA databases that can be extended to cover other species, including humans. This might sound unlikely right now, but the idea of putting microchips in human bodies sounded bizarre a few years ago when it was completely acceptable to put them in dogs' bodies. If plans are being tried out in dogs first when the intention is to inflict them on humans then we can perhaps see a database of human DNA at some time in the future; indeed there is already one for people arrested by the police for an offence as petty as littering with chewing gum, and forensic artists have gone as far as to make a facial fit from DNA evidence alone, see: http://blogs.redorbit.com/think-twice-about-spitting-out-your-gum/. There is an agenda to create a database state using advanced technology that did not exist when George Orwell wrote 1984; and if it had it would have made Big Brother's job so much easier, see: http://hpanwo-voice.blogspot.co.uk/2014/01/all-people-to-be-microchipped-within.html. You might argue that this shows I don't care about dog droppings defacing our pavements and that I don't want to do anything to stop it happening. But, as I've pointed out, this issue has been almost solved already in the without resorting to biometric and DNA state imposition. Why can't just do the same as us?
Posted by Ben Emlyn-Jones at 19:41