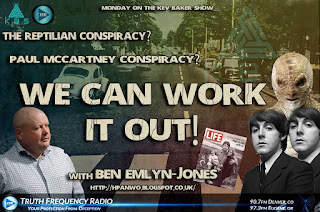 I have been interviewed again on the Kev Baker Show (aka MrGlasgowTruther) on Truth Frequency Radio, see here for the podcasts: http://truthfrequencyradio.com/the-kev-baker-show-62545/.
And here for the illustrated YouTube version.
Part 1: https://www.youtube.com/watch?v=NI--YPuSlSg.
Part 2: https://www.youtube.com/watch?v=cQ3W6QFyjLY.
Subjects discussed include: Could Paul McCartney be Dead?, encounters with reptilian humanoid creatures, and much much more.
See here for my previous appearance on the Kev Baker Show: http://hpanwo-voice.blogspot.co.uk/2016/02/ben-emlyn-jones-on-kev-baker-show-6.html.
Posted by Ben Emlyn-Jones at 22:01 No comments: 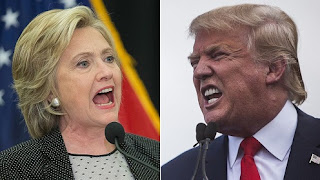 This is a follow-up article to one I wrote a while ago. Please read it first if you haven't yet, see: http://hpanwo-voice.blogspot.co.uk/2016/01/trump-n-sanders.html.
In the above link I made a prediction; I said: "Hilary is the chosen one. What we are going to see over the next few months is a sudden and inexplicable decline in the public presence of Donald Trump and Bernie Sanders. By November their very names will be virtually forgotten." This has not come to pass, at least when it comes to Trump. In fact Donald Trump has soared into a decisive lead at the Presidential Primaries and Caucuses; following his success at this week's second Super Tuesday, it is very clear he is not going to be another Ron Paul. Old Republican faithfuls like the former Presidential candidate Mitt Romney have urged the electorate not to back Trump. This is remarkably similar to the rise of Jeremy Corbyn in the British Labour Party and how Tony Blair and his Neoconservative acolytes spoke out against electing him leader, see: http://hpanwo-voice.blogspot.co.uk/2015/09/the-corbinator-wins.html. Unfortunately for the Republicans, their appeals have backfired just as badly. So it looks as if Donald Trump will be the Republican candidate in the Presidential election this year. I don't see how they can stop him now. Sure, it is still technically possible for Ted Cruz to appear to beat Trump through rigging the polls or expelling Trump at the GOP conference, but to do so at this point would be just so obvious that it wouldn't work. Too many people would see the manipulation for what it is. This indicates something else that I've noted before; the Illuminati do not have the ability to control absolutely everything directly. Their power comes from more the subtle influence of pivot points and marginal dialectics. They surf all the right rising and falling trends in a devious strategic manner, coaxing and prodding at the right spots, see here for more details: http://hpanwo.blogspot.co.uk/2012/03/some-of-them-are-on-our-side.html. And sometimes their plans do not work out. This does not mean they're going to give up. Hillary is still the chosen one, in my view. I've spoken to many people who disagree, but I do not believe Donald Trump is controlled opposition. He's too insensitive, tactless and, frankly, stupid. He's the ultimate useless idiot. This means new tactics will need to be drawn up to put Hillary where she belongs. As a last resort they can always do to Trump what they've done to others many times before, most recently Antonin Scalia etc. Like Corbyn will before the next general election, Trump could simply go for a walk in the woods...
Posted by Ben Emlyn-Jones at 14:08 2 comments: 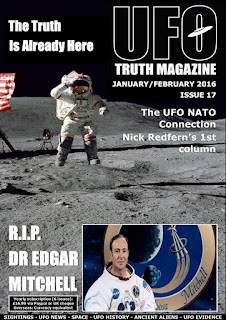 UFO Truth Magazine Issue 17 is now available. It can be purchased on this page as a single copy, but please subscribe and save money if you want to read it regularly, see: http://www.ufotruthmagazine.co.uk/subscriptions-shop/.
Issue 17 includes an article in my column, entitled: The Varginha Incident: Twenty Years On. In January 1996 in , an unknown object crashed to the earth and strange creatures were seen wandering the town. What progress has been made over the last two decades?

Also you will find in Issue 17: an obituary to Dr Edgar Mitchell, the recently departed Apollo astronaut and UFOlogical activist, did ET's create human life by Steve Mera?, the latest UFO sighting from , and much much more.
Also in this HPANWO Show programme I interview the UFO Truth's editor Gary Heseltine: http://hpanwo-radio.blogspot.co.uk/2015/02/programme-124-podcast-gary-heseltine.html.
See here for details on UFO Truth Magazine Issue 16: http://hpanwo-voice.blogspot.co.uk/2016/01/ufo-truth-magazine-issue-16.html.
Posted by Ben Emlyn-Jones at 20:47 No comments: