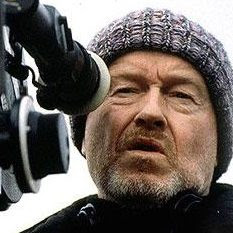 Common Purpose have hired one of Hollywood's top directors to make its promotional videos! Hasn't he got better things to do!? He did after all bring us masterpeices like Alien, Blade Runner and Gladiator.

Here's one of Scotts CP films: http://www.youtube.com/watch?v=MDBHgq9UTIo
Posted by Ben Emlyn-Jones at 19:30 No comments: 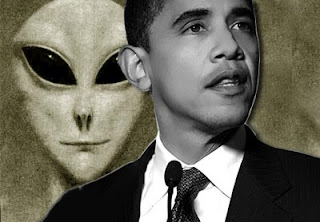 See this news story: http://www.ufodigest.com/news/1109/imminent.php
I'll believe it when I see it! I saw Steve Bassett live a couple of months ago where he bravely claimed that Disclosure would happen "this year". Personally I can't see how it can happen. What would happen if we came to the knowledge that the governments knew that UFO’s existed? Well, it would be the first in a long line of dominoes that would all inevitably fall; and the last one is the fact that UFO’s have crashed on Earth and that the governments have secretly salvaged them and back-engineered their power sources and propulsion systems. This means Free Energy. Fossil fuels have been obsolete for many decades, maybe longer. The authorities will not only have to deal with the liberating effect Free Energy will have on society, possibly catastrophically liberating from their point of view; but they’ll also have to admit that they could have declassified it 100 or more years ago, but didn’t for their own selfish reasons. This means that they’ll be faced with a very angry population! Maybe that’s an understatement! Every penny we’ve ever paid on gas and electricity bills, all the environmental destruction, all the poverty, all the people who’ve died of hunger in poor countries, all the wars for oil, … it’s all been for nothing! It was all preventable! We’d never trust them again and the Illuminati would have to kiss the New World Order goodbye, something that they’d never do.
I also believe there’s a second main reason for the cover-up (as well as several lesser ones): The effect that the acceptance of intelligent extraterrestrial life would have on us culturally and sociologically. The Illuminati-occupied governments use top psychologists to suss out our collective mindset and devise ways of keeping their control over it. (See these articles: http://hpanwo.blogspot.com/2008/02/tavistock-founder-dies.html and http://hpanwo.blogspot.com/2008/07/grimlys.html .) In 1960, at the start of the official space programme, one of these psychological think-tanks in America, the Brookings Institute, said that if NASA found traces of an extraterrestrial civilization, even if it was no longer alive, then it would cause social upheavals that could destroy social, religious and political structures. Therefore if such a discovery were made then it would perhaps be wise not to shout it from the rooftops. See this interview with Richard Hoagland about it: http://www.youtube.com/watch?v=GDEcfohz8xE . Here’s an interview with myself where I explain in more detail the nature of the Free Energy cover-up: http://video.google.co.uk/videoplay?docid=4323928805760172923&ei=4BDbSuKJHJjt-QbDhI31Bg&q=glastenbury+affair&hl=en# (from 6.20) and here is my own production, a HPANWO TV programme about the Free Energy issue: http://hpanwo-tv.blogspot.com/2009/09/freikraft.html .
Posted by Ben Emlyn-Jones at 16:03 No comments: 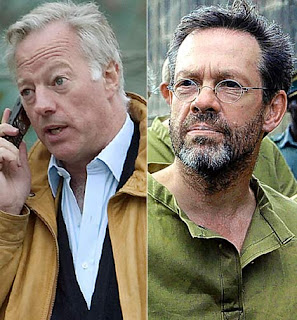 I’m afraid I have very little sympathy for Simon Mann. He was involved in a plot to ferment a coup in Africa for business purposes. Such activities have ruined the lives of millions of people across the Third World by creating poverty and oppressive regimes while the Elite get rich off them. Also he’s a very naïve man if he gets involved in a criminal deal with a blackguard like Mark Thatcher and expects better treatment! Thee only thing I agree on is that it's a shame Thatcher didn't join him in jail.

I notice how the Daily Mail are making a hero out of Mann because he’s a soldier. He may be a civilian no-patriated mercenary it doesn’t matter. He’s also ex-SAS… Get down on thine knees and worship him! In the eyes of the media soldiers are gods; see: http://hpanwo.blogspot.com/2008/07/our-brave-boys.html . It wouldn’t matter if Thatcher’s and Mann’s plot had killed millions through famine and violence; Gods can do whatever they like. For the Cult of the Soldier it’s just one more test of their faith.
Posted by Ben Emlyn-Jones at 18:23 1 comment: 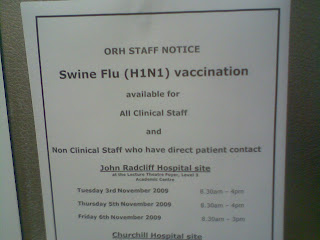 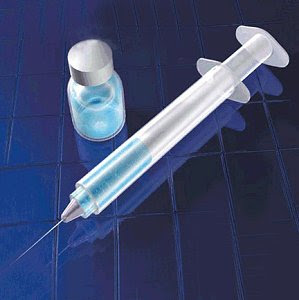 I’m a Hospital Porter (did I mention this before?) and as a result I’m considered among the people who are at the highest risk of catching Swine Flu. To protect me from this appallingly lethal plague (Just how lethal, see here: http://hpanwo-tv.blogspot.com/2009/07/swine-flu-diary.html), we health staff have been the first offered the H1N1 Swine Flu vaccination. I had many vaccinations in my younger days in the Hospital Portering Service, but that was because I didn’t know any better. When I used to go for my vaccinations I always made an appointment at the hospital’s Occupational Health Department. I had to see a nurse or doctor and fill in a form before being given jabs. With the Swine Flu this practice has totally changed. Last week two of my colleagues told me that that some people came into the hospital from outside, people dressed in suits, and just set up stalls in various departments and wards. They issued the vaccine to anybody who showed up and presented a staff ID badge. Then a couple of days ago posters started appearing all over the hospital advertising a ad-hoc Swine Flu jab clinic. I noticed that they’d misspelt the hospital’s name; the hospital media department probably wouldn’t make a mistake like that, so who produced the posters? I was very curious in a HPANWOy kind of way, so I went along.

The vaccinatorium yesterday was in the academic centre outside the lecture theatre. The “Swine Flu Men-in-Black” were now dressed in novelty T-shirts with a reassuring caricature of a pig on the front. Some of them were people I recognized from Occupational Health, but others were people who wore temporary ID badges, indicating that they were not Trust staff. I pretended that I wanted to have the vaccine and queued up with everyone else. We were made to fill out a form, just a basic one listing my name, staff number and position in the hospital. It asked if I had any allergies or had ever had bad reactions to vaccines; it also listed a few of the more common side-effects. There was a separate queue for people who answered “yes” in allergies box. When it was my turn one of the pig-T-shirted people gave me a card with the letter “C” on it and told me to go to cubicle C. There were also cubicles “A,B and D”. I asked him why they had set up this separate location to issue the Swine Flu vaccine and he replied: “Because this programme is too big to do at the Ockie Health office”. It’s true. The H1N1 is the biggest vaccination scheme I’ve ever seen being promoted in the NHS. As you’ll see in my Sine Flu Diary on HPANWO TV and in the many websites critical of the Swine Flu scare, Swine Flu is only a little bit worse than normal flu. Yes, for a small number of sufferers it proves fatal, but then so does normal flu. As I’ve said before, there is a distinct political agenda attached to Swine Flu which is summed up very well by Our Dave here: http://www.youtube.com/watch?v=cMinIt5Yq2E and Jane Burgermeister here: http://www.youtube.com/watch?v=PelTWCUmTsU . I went to cubicle C, which was just a couple of chairs and a table surrounded by screens. The jabber inside was a woman I don’t recall seeing before. I saw the ready-drawn orange syrettes of H1N1 vaccine lined up in a tray on the table beside her; they gave off a dark and sinister aura. She ran through the same questions I answered on the form and then asked me if I had any further questions. This was what I’d been waiting for. I outlined my fears. I asked her about Jane Burgermeister and she responded: “Who’s that?” I explained in a sentence or two and the jabber shrugged and said: “Dunno about that. But at the end of the day, everything carries a risk, and you’ve got to weigh up the risks of having the vaccine against those of not having it; as well as the risk to the patients if they catch it off you. You can discuss this with the Ockie Health consultant if you like. She’s busy now, but you can meet with her later.” I thanked her and said I’d go away to think about it and come back later... I didn’t.

I’ve done my best to persuade my Brother and Sister Porters and civilian colleagues not to have the H1N1 jab, but I couldn’t reach everyone. It was sad to see the long queue of people waiting in line for the vaccine. One girl I knew had it done who really should have known better because she is an Alex Jones fan.