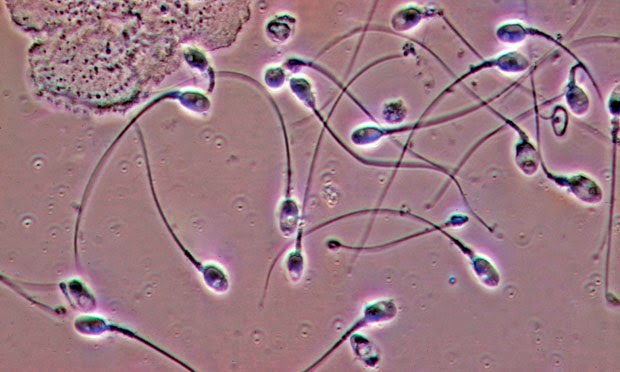 Something very strange happened a few years ago at the , the hospital where I was a Porter. A poster was pinned to the notice board of our lodge asking for any men aged between twenty and fifty to donate samples of semen. The request came from the , see: http://www.imm.ox.ac.uk/home. The IMM facility is located on the hospital site, yet it is part of . The volunteer donors were just asked to drop in and were treated on an ad hoc basis; they were not required to register or go through any preliminary selection or preparation process. This is contrary to normal practice in fertility medicine, see: http://www.fertilityauthority.com/men-only/getting-started/collecting-semen-sample. Most peculiar of all, they were paid ten pounds in cash for their donation; as one of the Porters put it: "It's the most profitable wank I've ever had!" At no point were any of the donors told what their sperm specimens were to be used for, and it also never stated any purpose on the poster. I warned my Brother Porters not to do it because their sperm might be used for some genetic experiment that was clandestine and sinister. I can only imagine what that experiment might be, but I have no doubt that extreme science does go on away from the public eye; here are just two possible examples: http://hpanwo-voice.blogspot.co.uk/2014/02/real-ape-men.html and: http://hpanwo-voice.blogspot.co.uk/2014/01/goblin-in-suitcase-scares-cops.html. If such experiments are going on then is likely to be involved somewhere down the line. is not only one of the most prestigious and famous academic institutions in the world, it is also one of the richest and most powerful. It has an incalculable budget that includes "black projects" and works very closely with governments, militaries and the corporate world. It's also not in any one place. When walking through I'm often approached by tourists asking me to direct them to the University; this is impossible because it's everywhere in many locations. Along with the thirty-eight principle colleges which are widely-spaced around the city, there is the aforementioned IMM which is placed inside a National Health Service campus. They own and hire facilities in other towns and even operate abroad. I voiced my suspicions to my Brother Porters and was saddened by their response. Some of them did not disagree with my concerns; however their response was to shrug their shoulders and say: "So what?" Naturally in this day and age a lot of people are hard up financially, including all Hospital Porters, but even beyond that it's become very trendy to be apathetic, maybe this is because of TavistockEnders, see: http://hpanwo-voice.blogspot.co.uk/2014/02/eastenders-murder.html. It's conventional wisdom to worry yourself purely with your own material status and to regard all wider ethical issues as irrelevant. People who are concerned over the futher-reaching morality of a situation are generally thought of as naive and irrational. All I can say to my Brother Porters, and I did at the time, is that if in a few years some semi-human creature with five arms and three heads knocks on your door and says "Hello, Daddy!" don't tell me I didn't warn you. If any HPANWO readers have had a similar experience, could you let me know?
Posted by Ben Emlyn-Jones at 18:35