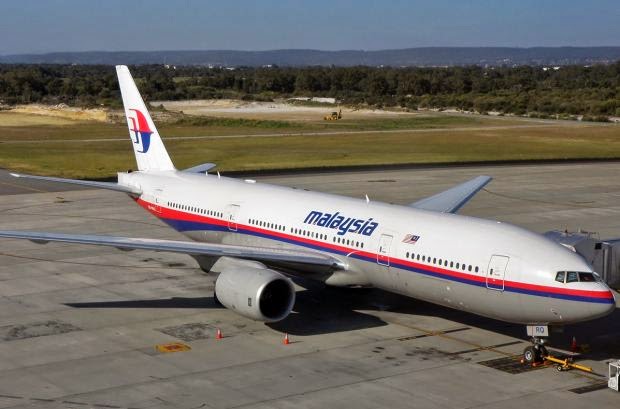 It has today been announced by the Prime Minister of Malaysia that the Boeing 777 airliner Malaysian Airlines Flight 370 crashed into the some two thousand miles southwest of . This conclusion is based on the presence of some flotsam spotted by search aircraft scouring the area; although this material has not yet been retrieved by ships and been positively identified. This has come three weeks after the aircraft went missing during a flight between and . I've not commented formally on this case until now because I wanted to see how the matter progressed. It's been very confusing. At first the search centred on the , but no debris was found. Then it shifted to the Nicobar and because military radar tracked the plane flying to the west. Then the pilot was accused of terrorism, even though he'd been flying for over thirty years and had an exemplary record; and all because of a badly-photoshopped image of him wearing a seditious T-shirt. Since 9/11, airliner cockpit doors are always locked during the flight making hijacks far more difficult, so the absence of evidence has been compensated for by a hyperallergic desperation to clutch wildly onto any clue. And all this time, the passengers' relatives are camped out at awaiting an answer. Source: http://www.bbc.co.uk/news/world-asia-26716572.

There are some strange anomalies connected to Flight MH370, for example two of the passengers boarded the aircraft with stolen passports. These passports were apparently stolen over a year ago; this is odd because if you steal a passport you have to use it quickly before the owner realizes that it's gone and gets it cancelled. This would lead the thief not only finding the passport useless, but also risking arrest at the check-in desk. Also a strangely large number of the passengers all worked for the same company, see: http://www.redicecreations.com/article.php?id=29355. It's been suggested that the missing plane is in , at the naval base on Diego Garcia, in , and , and even on the moon. Theories abound in the alternative community as much as they do in the mainstream media; although, as always, the alternative theories are more rational and sensible. The confused and half-hearted position coming from the authorities stinks of a cover-up, as does the emergence of what looks like planted false data, see: http://www.dailymail.co.uk/news/article-2587554/Did-somebody-doctor-photo-men-took-Flight-MH370-Fears-cover-amid-claims-pictures-passengers-set-legs.html. The possibility of supernatural forces at work has been tabled and I can't rule it out. Aircraft and ships do just disappear while at sea or in the air. There are even cases of trains vanishing off railway tracks. I don't believe in the Bermuda Triangle, at least as a location connected to this phenomenon. These kinds of events happen more often in the Bermuda Triangle area simply because of the large number of sea lanes and airways there. The density of traffic means it's statistically always more likely that disappearances will happen more often there; however, the phenomenon of vanishing ships and aircraft is very real and it's sometimes accompanied by UFO activity. One of the listeners of The Mind Set Podcast has requested that we let this subject go now; the mystery is solved. And it's true, we have thrashed MH370 thoroughly during the last few weeks on the show, see: http://hpanwo-radio.blogspot.co.uk/2014/03/ben-emlyn-jones-on-mind-set-podcast-46.html. However I think it's a bit premature to call case closed right now.
Posted by Ben Emlyn-Jones at 17:04

Hi Ben to be truthful this whole jet story has been one big muddle up from the beginning I stopped listening to the shit from the media the day after.

If the jet even eras for real how can they lose it in the first place with all those sat alights going on up there in space?

If you believe and I do in doctors Judy Woods idea of the twine towers, maybe the NWO are now taking out jet aircraft as well for what reasons who knows?

You're right, Arrmand, the whole story reeks of a muddle up and cover up. Maybe they did use a Hutchison Effect weapon on the aircraft. God knows why!