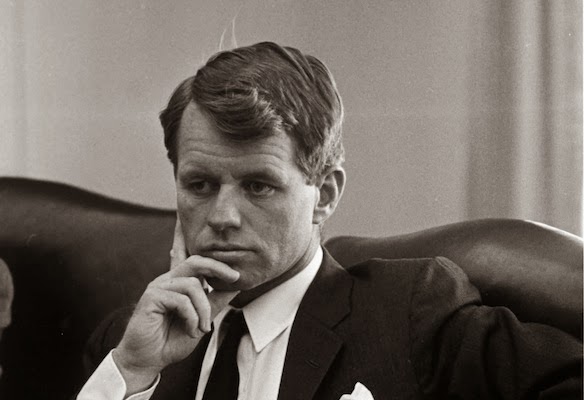 The slaying of Senator Robert Kennedy was the last in a series of three assassinations of leading American political figures in the space of just five years. It took place in the early hours of ; just two months earlier, on the 4th of April, the black civil rights activist Martin Luther King had been shot dead in an attack so obviously staged that the convicted shooter, James Earl Ray, almost won a retrial and gained the support of King's family. All this took place in the shadow of the assassination of Bobby's brother, President John F Kennedy on , see: http://hpanwo.blogspot.co.uk/2013/11/the-kennedy-assassination-50-years-on.html.

At the time he was killed Bobby Kennedy was campaigning for the Democratic nomination to run for President of the . He was attending a publicity event at the Ambassador Hotel in just after his victory in the California Presidential Primary Election had just been certified. He was accompanied by his campaign management team and two bodyguards as he took a short cut through the hotel's kitchen on his way to a press conference. He stopped to greet some of the kitchen staff who wanted to speak to him. At that moment the supposed assassin, Sirhan Sirhan, stepped out of his hiding place behind a refrigerator and opened fire with an Iver-Johnson Cadet 55 revolver. One of the security guards drew his own weapon, a Harrington and Richardson 922 pistol, but claims that he never fired. Sirhan was arrested and Bobby Kennedy rushed to hospital where he died. A search of Sirhan's house quickly revealed a diary in which there were long passages written by somebody stating an obsession with killing the senator, including the phrase "RFK must die!" The author of this passage announced that the killing was necessary to free the Palestinians because of Kennedy's support for . However when in custody and being questioned Sirhan behaved in a dazed manner and said he had no memory of the incident, in a scene eerily reminiscent of the 1964 film about mind control, The Manchurian Candidate. The official investigation concluded that Sirhan, like Lee Harvey Oswald, had acted alone and killed Kennedy for purely personal reasons. However one piece of evidence that was not tabled at the inquest was an inadvertent tape recording made by a freelance reporter Stanislaw Pruszynski. The recorder was placed outside the kitchen door, but if you listen to it you can clearly hear a series of gunshots followed by a woman screaming and loud, alarmed voices. This tape was analyzed in 2007 by Philip van Praag and shows that there is the sound of thirteen separate shots; Sirhan's weapons was a Iver-Johnson revolver which had only eight chambers and Sirhan did not have time to reload. What's more two of the shots are so close together that the rate of fire exceeds that possible with Sirhan's gun. This means that there had to have been at least one other gun firing at Kennedy; and, despite what cops and cowboys do in Hollywood movies, it's very difficult indeed for one person to fire two pistols simultaneously from both hands. So there was a second gunman. What's more the shot which killed Kennedy came from an assailant approaching from behind whereas Sirhan supposedly approached from the front or side. There was an armed man standing behind Bobby, a security guard called Thane Eugene Cesar, carrying a Harrington and Richardson 922 which he drew when Sirhan attacked, but he claims he did not open fire. The fatal bullet found in Kennedy's neck was never formally identified as coming from Sirhan's weapon and the Harrington and is hard to discern in terms of firearms forensics from an Iver-Johnson. So it looks as if we have a suspicious and anomalous situation which points to the conclusion that Senator Robert Kennedy was assassinated by a conspiracy, just like his brother John. Those who investigated could hardly have overlooked a piece of evidence like this accidentally, so those who investigated were likely to be in league with those who did it. Thanks to a YouTube friend who bought this video to my attention: http://www.youtube.com/watch?v=EbAp6kbLYkg.

Who would want to kill Bobby Kennedy, and why? Well, like his brother JFK, see above link, he had many enemies with many motives. If he had lived Bobby would probably have been the Presidential candidate who challenged Richard M Nixon in the 1968 Presidential Election, and he may have beaten him to the White House. This would have meant that a totally different man with very different policies would have presided over events as significant in history as the Apollo Moon Landings, the endgame of the Vietnam War, other associated conflicts in , the opening up of onto the world stage and the energy crisis of the early 1970's. Was Robert Kennedy strategically removed from the equation because the "men in grey suits" had plans for that Presidential election which they were determined should not be altered?
Posted by Ben Emlyn-Jones at 17:41