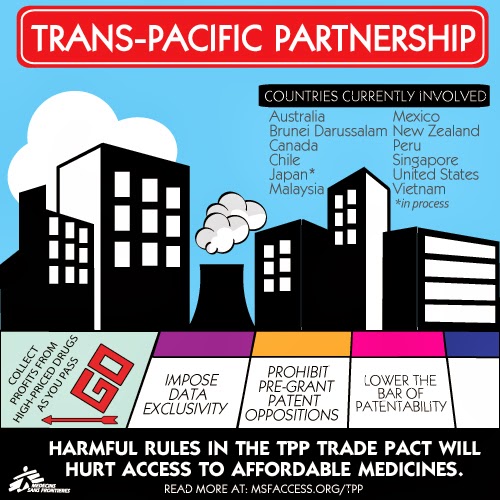 The title of this article refers to a new piece of international legislation that has been euphemistically called a "trade agreement". Eleven countries: the USA, Canada, Chile, Peru, Mexico, Australia, New Zealand, Vietnam, Singapore, Brunei and Malaysia, have signed up for it; more nations in the Far East and the Americas are said to be applying. Despite its benign facade it sports a sinister underbelly of secrecy. It has been negotiating in the strictest of confidentiality and officials from major corporations have been meeting with government ministers from all signatories behind closed doors. The TPP reeks of corruption; it specifies a brand new relationship between sovereign nation states and transnational corporations which allows the corporations exemption from the usual state laws related to labour and welfare, human rights, health and safety, and environmental protection. It gives corporations a free hand to extract "compensation" and "investment assistance grants" from taxpayers' money in any country that joins. All this is non-negotiable and has never been passed through any democratic political process. The TPP is a fundamental revolution in law and finance over how corporate entities do business with governments. It has the potential to be of enormous detriment to the mass of the human population and the natural world. I'm concerned that its ideas will spread; in fact we've seen carbon copies of this kind of thing popping up all over the world before, the European Union being the blueprint for NAFTA etc. The TPP may well emerge in a new form elsewhere, like maybe the "TEP, Trans-European Partnership"; or the "TAP, Trans-American (or African) Partnership". This is no less than an act of world economic conquest. See: http://www.exposethetpp.org/.

The solution, our resistance to the TPP and its inevitable offshoots, is simple. We take control of our own economic lives the same way we must every other aspect of them. We can form our own independent community economies, with our own money systems, our own small business enterprises, our own workers' cooperatives, our own organic farms. If these things haven't taken off in your local area yet, then start one yourself. If you don't feel like doing that then OK, at least be a patron to others who have. It's simple, just bypass Tescos and head for your small local store. Sure, the prices might be slightly higher, but the more people who buy local the quicker those shops can lower their prices. We can beat this, we've just got to be aware, and take action on our awareness together.
See here for essential background: http://hpanwo-voice.blogspot.co.uk/2014/02/the-oxford-pound.html.
And: http://hpanwo-voice.blogspot.co.uk/2008/09/archers-local-economy.html.
And: http://hpanwo.blogspot.co.uk/2007/09/workers-cooperatives.html.
And: http://hpanwo-radio.blogspot.co.uk/2013/01/programme-27-podcast-economics.html.
Posted by Ben Emlyn-Jones at 16:30