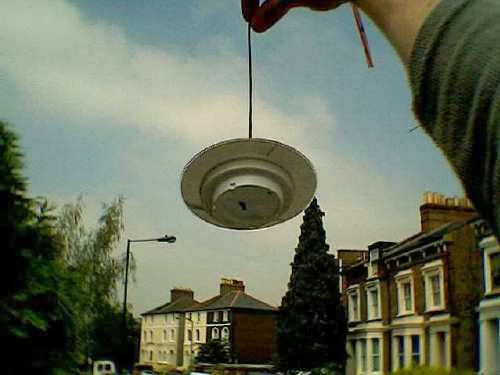 The UFOlogist Nigel Watson, author of the Haynes UFO Investigations Manual, has uncovered a plot by drone-builders to fake a global UFO flap. Drone enthusiasts from around the world have been hatching a plan, quite openly on a forum, about how they want to fool skywatchers into thinking that a mass-invasion by aliens is taking place. They're constructing aircraft shaped like flying saucers and adorned with bright coloured lights, which they intend to launch in a coordinated formation in multiple countries. This had originally been planned for April the 1st, but the date has been changed to the 5th so as not to make the prank too obvious. So thanks, Nigel. And be warned, everybody! See: http://www.openminds.tv/ufo-author-finds-plans-for-worldwide-ufo-hoax-april/26164.

This is not the first time a trick like this has been pulled. It's the kind of thing Skeptics like to do all the time; creating a fake paranormal event just to see how many people will fall for it. James Randi excels at this kind of thing and was the pioneer of it with his "Carlos" hoax. He hired the actor Jose Alvarez (who, strangely enough, is the cousin of Willy Rodriguez of 9/11 fame) to pretend to be a spiritual guru and go on a tour of to see how many disciples he could pick up, see: http://www.youtube.com/watch?v=y0hgP3ioAeA. Randi's professed motive for his scam was to "wake people up!" to how easily they can be fooled, and fool themselves; however I detect a sadistic and vainglorious element to this stunt, as I do in many of its successors. Other examples are Penn and Teller's fake bigfoot, see from 10.00 mins: https://www.youtube.com/watch?v=uAHVHKlxikU. The Skeptic perpetrators of these hoaxes invariably exaggerate the impact they have; as it happened many cryptozoologists were not taken in by P&T's attempt to show them up as dupes. The same goes in UFOlogy for Ray Santilli's "Alien Autopsy" film, see: http://hpanwo.blogspot.co.uk/2014/01/alien-autopsies.html. Another UFO-themed hoax has been played before too, in 2003. A TV production company employed a team of special effects engineers to design and build a drone that looked like a flying saucer; they then flew this over Avebury, Wiltshire. The plan was to fly it over this ancient monument and gathering place of counter-culturists, pagans, mystics and hippies to see how many of them would be fooled into thinking that a real flying saucer was in the sky above them, see: http://m.gazetteandherald.co.uk/search/7302062.Avebury_s_UFO_hoax_exposed_on_film/. Many of the people at Avebury did indeed report a UFO, but in a way the plan backfired because they reported pretty much what they saw. There were none of the embellishments and exaggerations that I think the hoaxers were banking on. It showed that even the so-called “most gullible members of society!” have turned out to be much better witnesses than previously thought. Hopefully this new plan will also backfire, by not working at all because the hoaxers have been rumbled; I intend to do everything I can to alert people in the UFO community before the hoax takes place.
Posted by Ben Emlyn-Jones at 17:27