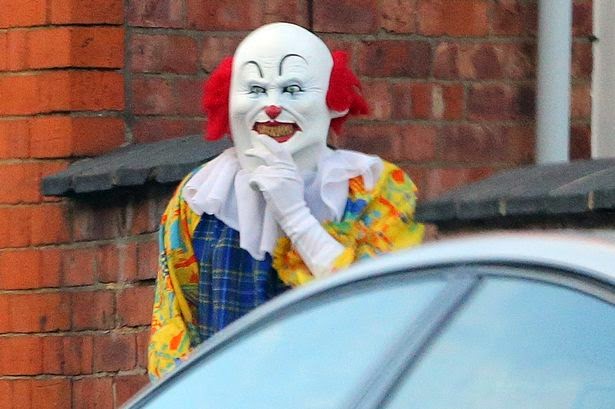 A few months ago the sleepy town of , was disrupted by sightings of a strange figure walking the streets dressed as a clown. The entity would sometimes approach people and issue the words: "beep beep!" This is the catchphrase of the supernatural clown Pennywise in Stephen King's horror story It. The being was seen by many people standing on street corners with balloons in its hands. Some witnesses laughed at it; others were afraid, suffering from "coulrophobia", the fear of clowns. More of these strange clowns appeared in several other places and before long Facebook pages about them were started. A few weeks later the mystery was apparently solved when the Daily Mirror published an article claiming to have unmasked the Northampton Clown, see: http://www.mirror.co.uk/news/weird-news/northampton-clown-unmasked-alex-powell-2366915. I wonder if this is true; the accused individual, student Alex Powell, previously denied all knowledge of being the long sought-after mysterious clown. Sightings of the clowns are still emerging at the time of writing.

A clown is a comic performer, usually male, wearing grotesque and colourful clothing, also distinctive makeup which exaggerate the facial features. They're usually associated with the circus and perform slapstick comedy acts. Psychologists theorize that clowns represent something very deep in our subconscious collective minds. Clowns can sometimes be malevolent adversaries as well as humourous protagonists; good examples of evil clowns are the aforementioned Pennywise as well as the Joker in the Batman stories and Mr Jelly from the TV sitcom Psychoville. They go much further back in history than I thought; they can be found in the ancient world, in fact their origins are shrouded in mystery. In Jungian psychology clowns might represent an archetype, maybe that of the "trickster". What is fascinating is that people experiencing altered states of consciousness sometimes encounter beings that look and behave like clowns. Dr Rick Strassman is a research psychiatrist who in the early 1990's carried out an experiment that involved giving doses of the powerful psychedelic drug DMT to human volunteers. Over twenty years earlier Dr Sanislav Grof did the same with LSD, see: http://www.rickstrassman.com/. These drugs have the uncanny property of producing very lucid visions of other worlds inhabited by unearthly intelligent creatures. Curiously enough different people from different places and backgrounds often encounter the same entities while on these psychedelic trips, including clown-like creatures. I strongly recommend Dr Strassman's book DMT- the Spirit Molecule for more details. Did clowns enter our culture through people experiencing shamanic voyages? In that case are these strange clowns popping up in and other places really just students playing a prank? Poor students! They get blamed for everything like this, don't they? Are these instead otherworldly beings who have managed physically to breach the wall between our world and theirs? Actually, I doubt it. I'm pretty sure that these clowns really are just people dressed up, whether or not they're students. But it's an interesting development from a Jungian worldview; could these tricksters be motivated by some kind of collective unconscious imperative that the clowns are using to examine this universe? They could be similar to "This Man", see: http://hpanwo-voice.blogspot.co.uk/2013/11/this-man.html.
Posted by Ben Emlyn-Jones at 18:07

It's very strange. My 13 yr old son mentioned that 'clown sightings' were a hot topic in his school, back in November 2013. I confess that I dismissed it at the time, but it was sufficient for him to have nightmares on several nights. Googling 'Sheffield Clown' reveals there have indeed been many reports in Sheffield, Rotherham, Barnsley, Scunthorpe, Lincoln and on and on.

Thanks for the info, Herbie. Let us know if either of you spot any more.