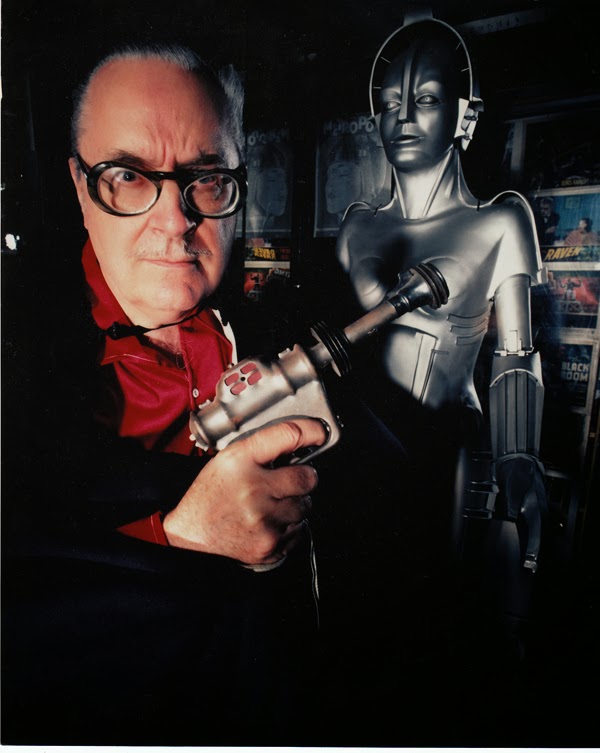 Forrest J Ackerman was a legendary aficionado of science fiction. Known as "Forry" or "4SJ" he knew virtually everybody who was anybody in the sci-fi world, "sci-fi" being a contraction he first coined. His home in is known as the "Ackermansion" and contains a massive science fiction museum crammed with books, magazines, videos, DVD's, artwork and sci-fi memorabilia dating back to the early 20th century, when the genre first emerged. It's also a meeting-place and tourist destination for sci-fi fans from all over the world. He died on at the age of ninety-two after a long illness. He passed away at home after spending a lot of time receiving visits from family and friends and many get-well messages from fans. He was a life-long atheist and Skeptic and always denied any belief in the Afterlife, whatever form it might take. Therefore what happened next was a bit of a surprise.

One of Ackerman's oldest and closest friends was the film director Paul Davids, a well-known name in the UFO community because he wrote the screenplay for the movie , see: https://www.youtube.com/watch?v=40ib9nOfIGE. A few days after reading a eulogy at Ackerman's funeral he was at home printing off a list of his business appointments for work; he threw the sheet of paper down onto his bed and went off to the toilet. When he came back just a couple of minutes later he was surprised to find an ink blot on the paper that had not been there when it was first printed. The blot obscured a specific piece of text, as if it had been done purposefully, not like a natural random smudge or toner leak. He had the ink analyzed in a chemistry laboratory and the scientist who did the analysis was confused as to how the ink got there; it hadn't come from Davids' printer, nor had it dripped from the ceiling or another location. What made it even weirder was that the words obliterated by the ink blot were particular ones that Davids recognized as being part of a word-game that Forrest J Ackerman loved to play. Other events happened after that which convinced Davids that his dearly departed friend was trying to communicate with him. What's more other people who knew Ackerman were having similar experiences. This saga eventually led to Davids making a new film, The Life after Death Project, see: http://www.lifeafterdeathproject.com/. This feature-length documentary addresses one of the oldest and most commonly-asked questions in history: "What will happen to me when I die?" It stars many leading scientists, philosophers and writers on the subject, like Prof. Gary Schwartz, Danion Brinkley, Whitley Strieber and Richard Matheson; and the arch-Skeptic Michael Shermer is included, so nobody can say it's unbalanced. The film is centred on the possible intrusion into the living world of Forrest J Ackerman.

Of course I am no exception in asking that perennial question. The problem with the society I live in is that it has little concept of the Afterlife beyond two central theoretical models: those of organized religion and establishment science. The former says that there is a Heaven or paradise created by God for those worthy of His favour, and a Hell of eternal torment for anyone else who pisses Him off. The latter claims that "I", my consciousness or soul, is a product of biomechanical brain activity and when I die and my brain ceases to function "I" will vanish forever. I find both these two models implausible and unsettling, but it's all we have, the cassock or the lab coat; take you pick! You have to choose one or the other; there is no third option... Well, there is, but if you choose it then both of the mainstream sides will forget that they're supposed to be opposites and unite and stand shoulder-to-shoulder in their condemnation of you. "What you're saying is the work of the Devil!"... "What you're saying is superstitious nonsense!" I think this is a deliberately induced psychological and cultural formation, but that's a long story. Based on what I've learnt I'm reasonable confident that after my death I, my soul or whatever you choose to call it, and everybody else's too, will persist in another form. The only way to be a hundred percent certain is to wait until it's our turn, but I think we've got good reason to be hopeful. From what I've seen in psychical research, what happened to Paul Davids is not uncommon. In fact similar things have happened to my own friends and family. It appears that at least some "spirits" or whatever term you wish to give people who've died, have the ability and/or the will to perceive this world and attempt to communicate with the living. They use various methods to do this; in some cases they might actually appear before you as a spectral apparition; this happened to me, see: http://hpanwo-voice.blogspot.co.uk/2008/10/real-ghost-train.html. Sometimes you might hear their voice; with others you just get a very powerful feeling that they're there. They may use electronic equipment to create visual or audio signals. In the case of Davids' printout, actual matter was created or manipulated. Spirits often have a variety of messages for the living; sometimes they'll approach strangers and at other times people they know and love. One of the most common messages is a simple greeting and a reassurance; just: "Hello there, I'm not really dead. I still exist". This is often accompanied by an affectionate farewell: "I love you and can't wait to see you again when you pass over" etc. In a culture in which death is taboo and not addressed, the possibility of messages from the beyond the grave is not something we often consider while we're alive. Harry Houdini tried it and there are two different schools of thought on how successful he was, see: http://hpanwo.blogspot.co.uk/2009/05/houdini-code.html. Wherever "Forry" is right now, I hope he's well and, although I never knew him, or even heard of him, while he was alive, he's welcome to drop in for a chat.
Posted by Ben Emlyn-Jones at 15:47