Will Donald Trump be Assassinated? Part 2 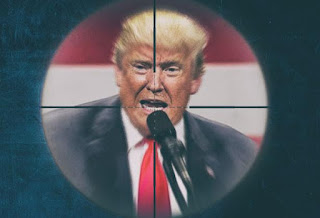 Last year, before he became President of the , I predicted that Donald Trump would die. He would be shot, have a heart attack, crash his plane; something like that, see: http://hpanwo-voice.blogspot.co.uk/2016/06/will-donald-trump-be-murdered.html. This didn't happen. Why? There are several schools of thoughts, but in my view it is the "2016 Effect", see: http://hpanwo-voice.blogspot.co.uk/2016/11/conspiracy-theorists-finally-proved.html. However the Empire has Struck Back. They are not going to go quietly and it is naive to think otherwise. I suspect there are preparations to make another attempt on Trump's life and the public is being prepared for the news in advance on a subliminal level. Three events, in particular, all within a week of each other, make for a sinister trend. Firstly the comedienne and TV personality Kathy Griffin posted a photograph of herself holding an effigy of a severed human head covered in blood that looked like President Trump. Apparently Trump's eleven year old son Barron was watching at the time and was horrified. This comes up on Third Rail Radio, see: http://hpanwo-radio.blogspot.co.uk/2017/06/third-rail-radio-programme-2.html. Secondly a play performed at the Delacorte open-air theatre in City, also seems to be a portent on Trump's death. The play was William Shakespeare's Julius Caesar, one that has traditionally been adapted into contemporary political settings. The play tells the true story of the assassination of the famous Roman emperor in 44 BC. He was stabbed to death by a large group of what he thought were his closest friends and political allies who in fact were conspiring against him. In this adaptation Caesar is made to look exactly like Donald Trump and the stage design has American flags and resembles the White House press briefing room. Calpurnia also looks exactly like the First Lady Melania Trump. Symbolically the killers are all played by a cast of women and ethnic minorities, feeding the revenge fantasies of those who believe the falsehood that Trump is some kind of fascist. In one of the performances Brutus was a black woman. The climactic murder scene is far more gruesome than in other adaptations with very graphic special effects, more than is normally used in a live stage show. At the end Caesar/Trump lies dead in a pool of his own blood with his entrails visible. This production was funded by a public arts project at the cost of 17 million dollars of taxpayer's money. The journalist Laura Loomer protested one of the shows by jumping onto the stage, see: https://www.youtube.com/watch?v=a39JswIqrHc. Thirdly there was a shooting at a baseball field on June the 14th in which a Bernie Sanders supporter opened fire on the players who were all Republican congressmen, see: https://en.wikipedia.org/wiki/2017_Congressional_baseball_shooting. Five people were injured, two of them seriously. If Trump does indeed end up being murdered, it must be placed on the record that this psychological preparation happened as well.
See here for more information: http://hpanwo-radio.blogspot.co.uk/2016/11/programme-210-podcast-us-presidential.html.
And: http://hpanwo-tv.blogspot.co.uk/2017/02/oxford-anti-trump-protest.html.
And: http://hpanwo-voice.blogspot.co.uk/2017/01/trumping-media.html.
Posted by Ben Emlyn-Jones at 18:13