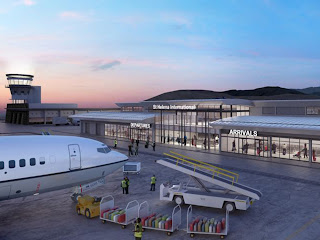 The next step towards making  a fully active destination has taken place. The St Helena Government has awarded the access contract. This means a company has been chosen to fly airliners too and from . There was a tendering process and the winner is SA Airlink, an established South African carrier that was founded in 1978 and operates a huge fleet that serves most of southern Africa and the Indian Ocean, see: https://www.moneyweb.co.za/news-fast-news/sa-airlink-chosen-as-bidder-for-commercial-air-services-to-st-helena/. This is a disappointment for me because I was rooting for Atlantic Star Airlines. This is a small independent company established specifically to serve and they stuck to their business plan even when the media was scoffing at the airport, calling it a white elephant that could never be used, and other airlines wouldn't touch it because of the various problems described in the background links below. Atlantic Star carried out a lot of calibration work at the airport, attempting to find a way over the wind shear obstacle. Atlantic Star was founded by three former British Airways pilots who have a real passion for the island, its people and its new airport. They only currently have one aircraft in service, an Avro RJ100 airliner, but they plan to expand. The operator posted a notice on their website announcing the bad news. They are being very dignified and magnanimous about the matter. They are not giving up and hope to work with the Saints and their airport in the future; in one capacity or another, see: http://www.atlanticstarairlines.com/single-post/2017/05/03/Atlantic-Star-unsuccessful-in-StHelena-Air-Access-Competition.
See here for background: http://hpanwo-radio.blogspot.co.uk/2016/11/programme-212-podcast-st-helena-airport.html.
And: http://hpanwo-tv.blogspot.co.uk/2016/06/st-helena-airport-opens.html.
And: http://hpanwo-voice.blogspot.co.uk/2016/12/st-helena-airport-first-military-flight.html.
Posted by Ben Emlyn-Jones at 12:14

Atlantic Star don't have any aircraft at all, let alone one in service!

Their Wiki page needs amending then.

Atlantic Star don't even have a Tour Operator Licence or an AOC Air Operator Certificate. And of course they have neither an aircraft nor a track record.

Their Wiki page needs amending then.