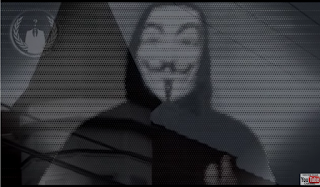 The global hacktivist group Anonymous has made an announcement that NASA is about to declare officially that alien life exists. This has been speculated for a while. There have been many recent breakthroughs related to the presence of conditions for life on the moons of the planets Jupiter and Saturn. It's been confirmed that these moons are covered by a crust of ice, but underneath there is liquid water. There must be a major alternative source of heat to do this because the moons are too far from the sun to get any warmth from it. It's probably volcanic. At the bottom of earth's oceans there are "black smokers"; volcanoes that are oases of life. Could these moons be the same? There are also over three thousand planets now known to orbit other stars, so-called "exoplanets". Many of them are similar to earth and therefore could produce life as we know it, Jim. However the Anonymous announcement goes much further. The presenter sits at a desk like a newsreader, dressed in their trademark Guy Fawkes costume and says in a modulated voice that a spokesman for NASA had said at a recent conference that "NASA is about to discover extraterrestrial life". Overlaid is a UFO photo. The NASA spokesman continued: "Are you ready for Disclosure? Are you expecting micro-organisms on a distant moon in our solar system?" This implies something far more spectacular is waiting in the wings. This is not to downplay the significance of finding micro-organisms, but that would pale beside the news that, say, radio signals from an intelligent species had been found out in the cosmos; maybe from "Tabby's Star", see: http://hpanwo-voice.blogspot.co.uk/2016/04/mysterious-star-update.html. Source: http://www.dailymail.co.uk/news/article-4637652/Anonymous-claims-NASA-verge-announcing-alien-life.html. Or could this have something to do with UFO's? Unfortunately Anonymous have made claims of imminent Disclosure before, see background links below. It still has yet to happen. As they saying goes, I'll believe it when I see it. However, an official press release stating simple single-celled organisms or even small aquatic creatures were real would not surprise me. In fact this has already happened with the "Mars Meteorite", see: https://en.wikipedia.org/wiki/Allan_Hills_84001. The success of SETI would not equal UFO Disclosure, but it would turn people's attention skyward and make them ask questions like: "If there is intelligent life out there in the universe then could they be intelligent enough to pay us a visit?... What if they already are?"
See here for background: http://hpanwo-voice.blogspot.co.uk/2016/08/real-contact.html.
And: http://hpanwo-voice.blogspot.co.uk/2016/11/ufo-truth-magazine-issue-21.html.
And: http://hpanwo-tv.blogspot.co.uk/2017/03/ufo-disclosure-2017-what-about-britain.html.
Posted by Ben Emlyn-Jones at 18:05