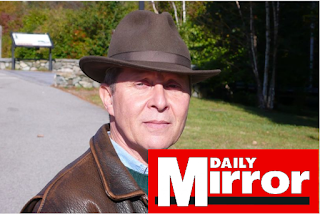 See here for essential background: http://hpanwo-voice.blogspot.co.uk/2017/05/the-larry-warren-controversy-part-14.html. Things have progressed quickly since the last article in this series, just a few days ago. Literally less than an hour after I posted Part 14, Nick Pope announced that a new article had been published in a mainstream newspaper, the Mirror Online, entitled: "UFO expert accuses co-author of 'deceiving' him with account of sighting during infamous incident". The author is named as "John Jefay", but reading through I wonder if it has a ghost-writer. The style feels vaguely familiar to me, and distinctly Papal. It refers to the radio programme I talked about previously. However, as I said back then, Peter Robbins was very ambiguous when he broached the subject of his co-author. I got into a discussion with Pope on Facebook where I explained calmly that Peter is making an assertion, not an accusation; there's a distinct difference. Peter has not yet published his entire case against Larry Warren; therefore the Mirror article is premature, to say the least. It crowbars an awful lot of words into his mouth, see: http://www.mirror.co.uk/news/uk-news/ufo-expert-accuses-co-author-10527844. Peter Robbins has struck back himself, chastising the reporter... whoever he is, for not even bothering to contact Peter personally. I don't know why Nick Pope has suddenly decided to jump on this bandwagon, probably because he has been falsely debunking Larry's story for some years now and Sacha Christie's tirades have just happened to hit the right pitch. Sacha must be loving all this publicity! While we're on the subject, Sacha herself has posted four more articles (although strangely none of them are about me and have the word "pussy" in the title, which is what I predicted). The first one reiterates details of her personal conflict with Larry, and personal is all it is. I refuse to comment on that; I'm concerned with the factual falsehoods she has published in order to attack Larry as a result of her personal animosity for him. She repeats a lot of the issues that I've covered before. The part which concerns me the most is when she accuses Nigel Mortimer of "harassing" her. As far as I can see, Nigel has been responding to hostility Sacha initiated. "Harassment" is a common accusation these days whenever white straight males disagree with "Women!", especially online. Source: http://sacha-christie-infomaniachousewife.blogspot.co.uk/2017/05/think-about-what-larry-warren-is-saying.html. Sacha is taking a leaf out of Kathy Griffin's book and trying to play on her projected victimhood.

Sacha's next article is the most interesting because, like some of her pervious efforts, it appears to contradict itself. The title makes the brazen proclamation: "Successful FOIA Request for Larry Warren's Military Records. They DO Exist." However, according to the content, when she applied under the Freedom Of Information Act it was not successful at all, and it backfired somewhat because it proves many of her claims wrong. She sent off a letter to the US National Personnel Records Centre and all she received back was a template courtesy acknowledgement. However, as you can see, within this response the NPRC describes Larry Warren as a veteran, in as many words. They would not do this if Larry had been a failed recruit who was kicked out after his first phase of training, which is what Sacha postulates. The documents she includes give Larry the rank of "Airman First Class"; this is "E3", the third non-commissioned rank in the US Air Force, the equivalent of a senior aircraftman in the 's Royal Air Force. Sacha will no doubt now state that these documents are forged. I think not, and I've even held the originals in my hand. Like Larry's letter to his mum, they are faded with age; and the means exists to test them properly. There are also many original photographs of Larry in his uniform with the double chevron insignia of an A1C. These also appear genuine, see: http://hpanwo-tv.blogspot.co.uk/2017/05/larry-warren-in-rendlesham-forest-2017.html. What's more Sacha says Larry was only in the USAF for eight months. That's an awfully long basic training period. In most military schools they kick you out the door if you're not fit to move upwards after just two or three months. According to Larry's copy of the documents, which I'm convinced are authentic, he was in for ten months. These ten months included a stint at a joint forces basic training centre, then security and law enforcement police training and advanced air base combat training at a US Air Force facility. Then he was sent out on active deployment to Bentwaters-Woodbridge. He is a veteran, it's in black and white, and Sacha has inadvertently confirmed it herself. The reply letter calls Larry a veteran and even contains the slogan: "We value our veterans' privacy!" In no way does the reply she got from the Records Centre prove that Larry's full military records are declassified. Source: http://sacha-christie-infomaniachousewife.blogspot.co.uk/2017/06/successful-foia-request-for-larry.html. 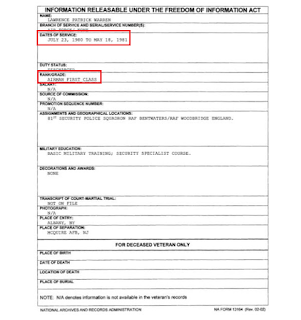 Gary Heseltine then noticed something from a back copy of UFO Truth Magazine. He wrote:
"Chance Observation: By chance I was looking at some of the previous issues of UFO Truth Magazine tonight when I happened to come across an article by Peter Robbins in Issue 2. I was particularly drawn to one paragraph about his initial relationship with Larry Warren in the 1980s when their collaboration period began. The following paragraph is a direct quote from his article in Issue 2 (July/August 2013). 'When Larry Warren, my co-author on the book Left at East Gate, and I began our investigation into the Rendlesham Forest incident in the late 1980's I interviewed and re-interviewed him repeatedly regarding his memories and involvement in the events of December 1980, sometimes to the point of distraction. But he was almost always a good sport about it and put up with my repeated enquiries.' Thus it now begs the question: how, when you've questioned LW 'to the point of distraction', that you could have been 'deceived' which you now claim? At the time of writing this article your collaboration period was at the twenty-four year point. Yet, just four years on and having written three books, all about LW and his involvement the RFI I might add, you now find you have been 'deceived' by LW for twenty-eight years! It seems to me that you are either the world's worst judge of character or when some ill-judged questions, most of which hold little or no evidential credence in relation to LW's RFI involvement you chose to cut him loose to the gang of wolves with a malicious agenda (i.e.condemn him as a liar, a fraud, a conman first, then claim in the next breath that 'their aim was only to seek the truth!) or when the going got tough you cast him aside in a desperate attempt to save your professional reputation. GH."
We simply don't know because of Peter's current reticence. When Peter presents his full case against Larry we will see. As I said in the previous part of this series, I urge Peter to examine my own analysis of this controversy, as well as those by Gary, Tino, Nigel and others (a new name has emerged on this scene, but I'm not sure she wants to go public yet, so I'll keep her statements confidential for now), before he makes any full public statement. It would be terribly embarrassing for Peter if he threw away all his previous conclusions about his co-author going back over thirty-five years because of a short sharp pixellated keyboard-slap from Larry's scorned ex-landlady with a silver tongue, no sense of fair play and a vivid imagination. Source: http://sacha-christie-infomaniachousewife.blogspot.co.uk/2017/06/gary-heseltine-slams-peter-robbins-in.html. Sacha's most recent article at the time of writing is allegedly a transcript of a dialogue between Larry Warren and Georgina Bruni. Unfortunately it is impossible to confirm the authenticity of this document because Georgina Bruni has sadly passed away. Source: http://sacha-christie-infomaniachousewife.blogspot.co.uk/2017/06/georgina-bruni-did-tell-people.html. All we can do now is wait for a full statement from Peter Robbins. I'd like to reassure Peter that whatever he says, I will give him a proper hearing and respond to him in a respectful and professional manner.
See here for the next part: http://hpanwo-voice.blogspot.co.uk/2017/06/the-larry-warren-controversy-part-16.html.
See here for more background: http://hpanwo-tv.blogspot.co.uk/2016/06/scottish-ufo-and-paranormal-conference.html.
And: http://hpanwo-radio.blogspot.co.uk/2016/07/programme-197-podcast-larry-warren.html.
And: http://hpanwo-voice.blogspot.co.uk/2016/09/truth-mobbed-again.html.
Posted by Ben Emlyn-Jones at 16:26