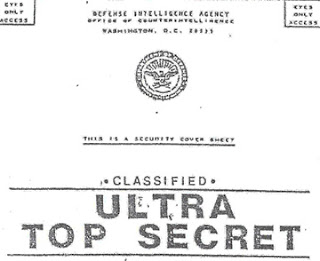 As the seventieth anniversary of the Roswell UFO Incident looms closer and closer there is a heightened state of excitement in the UFO research community. I can feel it myself, see: http://hpanwo-voice.blogspot.co.uk/2017/04/roswell-70.html. It therefore seems remarkably apt that some sensational new evidence has come to light at this time. It takes the form of a supposedly secret government document that belongs to a contact discovered by the American radio broadcaster Heather Wade, hostess of the Midnight in the Desert late night talk show. She obtained this document from somebody she identifies only as a "trusted source" who are two former military servicemen and have possessed the documents for a long time. She says: "At this time we can find no evidence of forgery."
You can download PDF's of the so-called "New MJ-12" documents here: http://midnightinthedesert.com/exclusive-ultra-top-secret-assessment-situation-statement-position-ufos/.
The first thing that strikes me about this forty-eight page file is that it is a very poor quality reproduction, as if it's a tenth to twelfth generation photocopy. Some of its text is completely illegible. Even David Rudiak will have trouble demystifying a lot of it. A repeating curse is that Heather Wade has only been given these crude copies, no originals. This was the case with the first MJ-12 documents too. These were revealed only as photographs sent anonymously to Jaime Shandera in 1984. If any real MJ-12 papers existed then they have never been found. This new document declares itself to be a product of the Defence Intelligence Agency; unfortunately the date cannot be discerned. It says that it is for the attention of the office of Majestic 12 and describes the role of Majic-12 in a similar way to the original MJ-12 documents do. It begins with "historical precedents" to the crash in in July of 1947 and then a summary of it. It mentions the Aztec, event and includes a detailed description of the crash-retrieval operation and even the transcript of a conversation between the human investigators and one of the EBE's inside the Aztec flying disk. Unlike in the testimony of "Victor" and his "Alien Interview", see: http://hpanwo-radio.blogspot.co.uk/2016/07/programme-196-podcast-alien-interview-20.html, this particular alien is very talkative and relates great details about themselves and their relationship with planet earth and its inhabitants. It seems to have more of an affinity with trees than with humans or any other intelligent animals. Its species used to visit earth regularly in the past and interact with the humans who lived in before the arrival of European settlers. The creature chides Western civilization for the Holocaust, slavery and the mistreatment of black people, in a tone that sounds almost like a human left-wing radical. It claims that its peoples' current visit to earth is because it was summoned by a message sent to them by Nikola Tesla from Colorado USA in 1899. Their species refuses to interact openly with humanity because we are too aggressive and immoral. They fear that we would hang them all from the trees they value so much. They therefore wish to remain nothing more than a myth, like Santa Claus. The document ends with a summary briefing by MJ-12 that describes all the different kinds of extraterrestrial. There is also an appendix of alien symbols and a sample of their language script. That is the only truly original part of the docuement.

Several other researchers have already examined these documents. Kevin Randle is known for his very Fortean views on the UFO phenomenon and was instrumental in forewarning the UFOlogy community about the impending debacle of the Roswell Slides, see: http://hpanwo-voice.blogspot.co.uk/2015/05/my-last-word-on-roswell-slides.html. He has written two articles on the subject of these new documents and done a radio interview. He is familiar with official government paperwork and knows what signs to look for. As with the first MJ-12 release, the dating format is wrong. So are the time stamps. The military does everything on the twenty-four hour clock in Universal Coordinated Time or Greenwich Mean Time, known as "zulu" and there is no colon between hours and minutes. For example: "0715z" means in the morning GMT. Also the document classification warning reads: "ULTRA TOP SECRET". "Ultra" was the codename for a real British intelligence operation during World War II and would probably not be reused by the government afterwards for this reason. However Top Secret is the highest classification within the government information structure and compartmentalization within it is not designated by a higher level, only with a codeword, for example "Top Secret- Skylark" or "Top Secret- Greenwood" etc. Catchphrases like "Above Top Secret" are a descriptive device used by UFO researchers, not government agencies. There are anomalies with the description of the incident too, such as Gen. Twining relieving Col. Blanchard of his command of the base. Of course the presence of Twining in the theatre of operations would have meant Blanchard would have to defer in real time into the natural chain of command on scene, but this is not the same thing as relieving him of his post. Randle's conclusion is that the documents are forgeries and that "this does nothing to further our knowledge and just confuses an already confused issue." Maybe that's the idea, Kevin. Source: http://kevinrandle.blogspot.co.uk/2017/06/mj-12-latest-documents.html and: http://kevinrandle.blogspot.co.uk/2017/06/mj-12-new-documents-old-story.html. Linda Moulton Howe has put together an article without any validity assessment of the documents; however she has included some useful side notes that add clarity, see: https://www.earthfiles.com/news.php?ID=2534. Stanton Friedman is currently in the middle of studying the documents. He said immediately: "I've never seen anything like this!" Nick Pope's assessment is far blunter; he says the new MJ-12 is "fake with a capital F!" He adds: "I suspect they've been hoaxed by someone on the fringes of the UFO community, playing an elaborate practical joke to see if they can put one over on the true believers." Stephen Bassett thinks this might be some kind of purposeful disinformation, or that they could be the real thing. Alternatively they could be a hoax by either a skeptic or, as Nick Pope said, somebody on the fringes of the UFO community. Nick Redfern is pretty sure they're fake and not government disinfo: "While I don't know who faked those new MJ-12 documents, there's not a chance this is disinformation by a government agency." Source: http://www.express.co.uk/news/weird/818311/Roswell-UFO-aliens-proof-DIA-leak-fact-or-fiction. I have little doubt that these documents are bogus. Could they be deliberate disinformation purposely seeded into the media by government agencies? Quite possibly. The mainstream media has covered them extensively; the above article from the Express is just one of their many platforms. This is also the seventieth anniversary, as I said, and inevitably the profile of will rise up as a result. I partly disagree with Nick Pope though. Judging by their crudity and the transparency of their creator's blunders, I would say that if this is disinformation then it is targeted at the general public rather than UFOlogists and conspiracy theorists like me. This is an indicator I have spotted before, see: http://hpanwo-voice.blogspot.co.uk/2015/03/the-great-ufo-conspiracy-review.html. A hoaxer within the UFO/conspiracy movement would have made far more of an effort; they would realize that they had to. Indeed the original MJ-12 documents are a far more sophisticated forgery (If indeed they are not real) for this very reason. They were intended for consumption by knowledgeable enthusiasts. I'm sure there will be more information soon, in which case I will write an update.
See here for background: http://hpanwo-tv.blogspot.co.uk/2017/03/ufo-disclosure-2017-what-about-britain.html.
And: http://hpanwo-tv.blogspot.co.uk/2015/05/ufo-disclosure-2015-roswell-slides.html.
And: http://hpanwo-radio.blogspot.co.uk/2015/08/programme-149-podcast-alien-autopsy.html.
And: http://hpanwo.blogspot.co.uk/2015/01/area-51-alien-interview-new-research.html.
And: http://hpanwo-radio.blogspot.co.uk/2013/05/programme-46-podcast-citizen-hearing.html.
Posted by Ben Emlyn-Jones at 11:44

Del, king of the throats said...

What ya talkin' about Jones?