Tories and the DUP 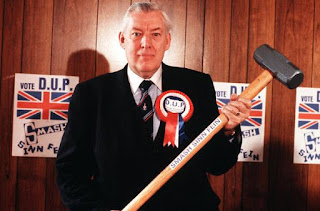 Theresa May has not resigned, which is an incredibly arrogant position after her apocalyptic failure at the general election, see: http://hpanwo-voice.blogspot.co.uk/2017/06/general-election-2017-results.html. She has in fact moved from one stupid blunder straight on to another. She wants to form an alliance with the Democratic Unionist Party. The DUP was founded in 1971 by the man with a louder voice than everybody else in put together, the Revd. Ian Paisley, a manic, ranting religious extremist. This is not the first time the Conservatives have allied themselves with exclusively Northern Irish political groups; they were previously affiliated to the Ulster Unionist Party, however the DUP is far more radical than the UUP. The DUP, ironically, presents many opinions I agree with, such as the need for a hard Brexit, opposition to abortion and opposition to internationalism based on climate change. However they also have expressed sympathy for the antithesis to the IRA, violent paramilitary groups such as the Ulster Volunteer Force and the Ulster Defence Association. These carried out very similar attacks to their Catholic republican opponents. Their violence culminated in a spate of car bomb attacks in and in 1974 that killed thirty-three people, all innocent and uninvolved with the Troubles. The hypocrisy of the tabloids in their denouncement of Jeremy Corbyn as a "terrorist supporter" is breathtaking; surely even the most conformist reader must this time see through it. The DUP also have links to the Orange Order, a Masonic-like secret society. One of their members was Andrew Power who wrote an explosive book, Ireland- Land of the Pharaohs, that revealed its secrets, see: http://hpanwo-voice.blogspot.co.uk/2013/07/the-orange-order-marches.html. They are Christian fundamentalists who would ban gay marriage and many other recent reforms that have improved the lives of homosexuals across while doing no harm to anybody else. They insist all shops should be closed on Sunday. The DUP have ten MP's in the Westminster House of Commons which would just about create a majority alliance if piled on top of the Tory seats. However if Prime Minister Theresa May really threw this election to derail Brexit, as somebody suggested to me, see: http://hpanwo-tv.blogspot.co.uk/2017/06/general-election-2017-results.html, what effects will it have to join forces with a party which is completely pro-Leave? The DUP are the kingmakers now. Unlike with the Liberal Democrats in 2010, this time it's the Tories who need them; they can dictate all the terms. The DUP has never sought power in Westminster anyway; their only concern is Northern Ireland. They're one of the province's biggest political parties. In the meantime two of Mrs May's key advisers have quit, see: http://www.bbc.co.uk/news/uk-40231107. This situation cannot go on; it is politically impossible. It's even gone to the farcical extremity of the Tories apparently naming their committee involved with the alliance the Conservative and Unionist Negotiating Team... and they never noticed the resulting acronym.
See here for background: http://hpanwo-radio.blogspot.co.uk/2017/06/programme-239-podcast-general-election.html.
And: http://hpanwo-voice.blogspot.co.uk/2017/05/reconsidering-voting.html.
And: http://hpanwo-voice.blogspot.co.uk/2015/05/general-election-result.html.
And: http://hpanwo-voice.blogspot.co.uk/2016/11/conspiracy-theorists-finally-proved.html.
Posted by Ben Emlyn-Jones at 15:36