Evidence of Past Time Travel 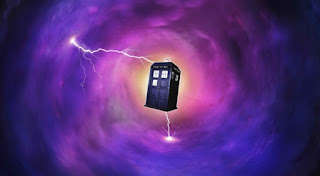 A group of Australian quantum physicists have made a remarkable discovery. It's been well know in popular culture for a while that in the world of subatomic particles the laws of physics are very different to the ones we observe in the superatomic material world. There are such anomalies as superposition, an object being in more than one place simultaneously; and entanglement, two objects mirroring each other's movements instantly regardless of how far away they are separated (That could be the basis of a brilliant communications device. You could talk in real-time to an alien in a distant galaxy. It would have profound implications for SETI- the Search for ExtraTerrestrial Intelligence). The double-slit is the best known of these; this clip from the film What the Bleep do We Know explains it: https://www.youtube.com/watch?v=fwXQjRBLwsQ. Now a new factor has been added to the mystery; time. This new experiment in shows that the point when the observer effect directs the wave collapse is not at the point in time when the measurement takes place; it happens beforehand. Source: http://www.digitaljournal.com/science/experiment-shows-future-events-decide-what-happens-in-the-past/article/434829#ixzz4kNHNoU11. This is incredible. It is the first ever evidence of time travel into the past. Time travel in science fiction is addressed as a singular subject when in fact it is too very different subjects indeed; time travel into the future and time travel into the past. Time travel into the future is comparatively easy. Literally all you have to do is travel very fast. In fact there is a man called Valery Polyakov who travelled a tenth of a millisecond into the future by living on board the Mir space station, predecessor of the International Space Station, for 437 days and 18 hours; over a year in space. He orbited the earth at a speed of 17,000 miles per hour continuously and as a result travelled into the future. This was calculated using Einstein's Theory of Special Relativity. If you wanted to visit the distant future you could do so simply by building a spacecraft that could travel much faster than Mir. Backwards time travel is a different matter. It is declared to be impossible by most physicists, outside sci-fi authors' imagination. Even if there was a way to make it work, it would generate the "grandfather paradox" and other logical breakdowns. The best we can do is create the illusion of backwards time travel within the Many-Worlds hypothesis by visiting a world that is identical, or even closely resembles, earth's own past. However this new experiment throws that entire theoretical opus into the dustbin and, once again, forces the scientists to go back to square one. We have direct evidence of backwards time travel, albeit only in the informational sense and only in the realm of quantum physics. This doesn't yet mean you can go back and watch the premiere of Romeo and Juliet. However it does make one ponder the possibilities.
See here for more information: http://hpanwo-voice.blogspot.co.uk/2016/09/ive-got-mandela-effect.html.
And: http://hpanwo-tv.blogspot.co.uk/2015/07/cern-progress-or-apocalypse.html.
And: http://hpanwo-voice.blogspot.co.uk/2017/02/cern-disproves-ghosts.html.
Posted by Ben Emlyn-Jones at 17:09