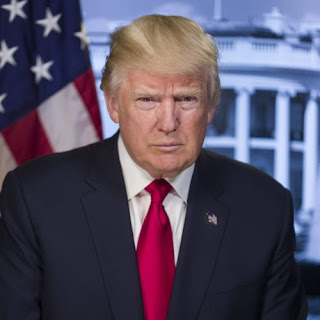 There's a saying that you can't work in a paint shop without staining your clothes. When Donald Trump became President of the he rode in on a manifesto that included tackling government corruption. His catchphrase was "Drain the swamp!". Trump was elected to the White House as his first ever political appointment. Before then he had been a businessman his whole life who had only skirted the peripheries of the political world. It must have been a horrifying shock for him to see government for the first time as an insider. The real swamp is of a scale and a rancidness that was totally beyond his worst expectations... and he was thrown straight into the deepest stretch. Who knows what they threatened him with; but it would have been something far worse than the recent Stormy Daniels scandal. Maybe it's the life of Melania or Barron; or perhaps some of his many grandchildren. 2016 is over; the empire has struck back and today the is only about two years behind where it would have been if Hillary Clinton had won, as they had intended. In a baffling manoeuvre, Trump has appointed John Bolton as his National Security Adviser; this is the neoconservative hawk who was George W Bush's ambassador to the United Nations and one of the driving forces for the and invasions. And now an incident has just occurred that is virtually an exact repeat of a trick they tried to pull off almost precisely a year ago to the day, see: http://hpanwo-tv.blogspot.co.uk/2017/04/counter-trumpening.html. There has allegedly been a chemical weapons attack on the town of in . This has been blamed on the government forces led by the Syrian national leader Bashar al-Assad. Last year this led to an armed strike on a Syrian airbase that came perilously close to a direct military confrontation with , a reckless engagement between two nuclear superpowers that could easily have escalated to the total destruction of both countries and the deaths of millions of people on both sides. Now it's happening again and President Trump has warned that he will once again carry out a military attack on . He said: "Get ready , because they (cruise missiles) will be coming, nice and new and smart!" Source: http://www.bbc.co.uk/news/world-middle-east-43727829. However Trump is a prolific Twitter-user and when you read this Tweet of his on the subject a different picture emerges: "Many dead, including women and children, in mindless chemical attack in . Area of atrocity is in lockdown and encircled by Syrian Army, making it completely inaccessible to outside world. President Putin, and are responsible for backing animal Assad. Big price..." 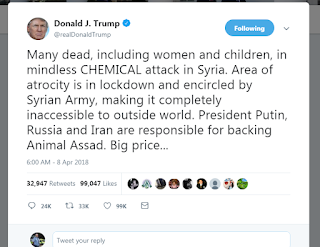 He describes the attack by Assad as "mindless"; that's a strange and revealing word to use. Assad has all but won the civil war against Al Nusra, the Syrian equivalent of the Islamic State that the has been supporting. recently announced that it was removing all military assets from the region, effectively making this a mission accomplished situation for Assad. If he were some sort of masochist intent on thwarting his own political ambitions then he would have to do something hideous in order to shame himself in the international community, reignite domestic hostilities and invite renewed US intervention... such as carrying out a chemical warfare attack against women and children. This is also an area that he has entirely under siege by his army. Why would he need to attack the area with chemical weapons in any situation? I think Trump's Tweet is a cryptic cry for help. He cannot warn us openly so he is doing so the only way he safely can, by hinting. He makes the point that Assad's actions are "mindless" and militarily superfluous as well as political suicide. Then he also adds the point that Dummar is inaccessible to the outside world; this will hopefully make people ask how on earth anybody can confirm whether the stories of chemical warfare attacks are true. Then Trump goes on deliberately to contradict himself by saying that is responsible. I just hope this is enough to alert the population before it is too late...
See here for background: http://hpanwo-tv.blogspot.co.uk/2017/01/an-open-letter-to-donald-trump.html.
And: http://hpanwo-voice.blogspot.co.uk/2016/11/conspiracy-theorists-finally-proved.html.
And: http://hpanwo-voice.blogspot.co.uk/2017/04/the-path-to-world-war-iii_92.html.
Posted by Ben Emlyn-Jones at 19:11