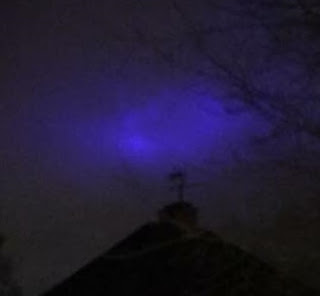 This case interests me especially because it's a local one from my home. Last Wednesday night the overcast sky was lit up by a bright blue blob of light, although I did not witness this personally. The blue light moved eastward from Bicester and Thame in Oxfordshire to . Several "rational explanations" have been proposed such as lights from a train or a novelty spotlight from a party. An astronomer said: "It's definitely not aliens!"... Aliens? Who said anything about aliens? Another expert thought it might be landing lights from an aeroplane coming into RAF Brize Norton, however no aircraft engine noise was heard. The colour can apparently be explained by the filtering effect of the clouds, turning the usual white lights blue. I've never seen that happen before and I'm not sure normal clouds can do that. Source: http://www.oxfordmail.co.uk/news/16139878.What_was_the_strange__blue_glow__moving_across_the_sky_last_night_/. The strange thing is that the week before this happened somebody wrote to me to tell me about a similar event in a distant part of the world. In the the sky turned purple, see: https://www.dailystar.co.uk/news/weird-news/681485/Alien-news-onlookers-terrified-by-purple-sky-Prince-purple-rain-camera-Philippines-video. I don't know what this could be. Is it the aurora, caused by solar activity? Maybe it's something to do with HAARP or chemtrails.
See here for background: https://hpanwo-voice.blogspot.co.uk/2015/03/oxford-martin-school-and-geoengineering.html.
And: https://hpanwo-voice.blogspot.co.uk/2015/01/eyes-in-outer-space.html.
And: https://hpanwo-voice.blogspot.co.uk/2013/10/white-chemtrails.html.
Posted by Ben Emlyn-Jones at 19:10

Hi Ben, I'm an amatuer astronomer based near Herstmonceux and I can assure you and your readers that what we see here is nothing more then the last lights of day. I know you wish it were something tasty like blue gaseous flying saucers but it is just the way the sun's light hits the earth during this time of year and the location on earth.

Hi Gavin.
Really? It seems a highly unusual effect. I've never seen a sunset like this before. I don't "wish" it were flying saucers etc. I'm just open to the possibility.
Ben