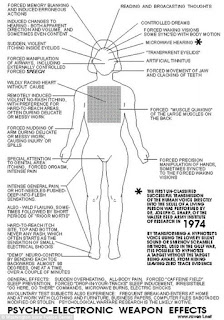 A journalist working for the civil liberties news group Muckrock has been sent what looks like pages from a classified document on mind control and electronic weapons. The investigative journalist, Curtis Waltman, had been involved in a research project on violent extremist political groups in the . He submitted a Freedom of Information Act request to the Washington State Fusion Centre, a public safety and anti-terrorism agency attached to the US Department of Homeland Security, asking for information on radical left and right wing political movements and received in response a Zip folder entitled EM effects on the Human Body (EM is short for "electromagnetic"). It includes several diagrams on how electromagnetic weapons work. It lists the effects on the targeted individual which are an array of very unpleasant mental and physical symptoms; including forced amnesia, voices in the head, spontaneous pain and itching, stiffness of the limbs and loss of dexterity. It also details how these weapons could be wielded against the population. Waltman doesn't think these look like government documents. Source: https://www.muckrock.com/news/archives/2018/apr/18/fusion-center-em/, and: http://www.dailymail.co.uk/sciencetech/article-5638069/Government-accidentally-sends-strange-conspiracy-theory-file-describing-remote-mind-control.html.

If these documents are genuine, then they are very important because of where they come from, regardless of how they are formatted. As "X-Files-like" as this information sounds, it contains nothing essential that has not previously been published. The technology described therein exists, patents have been issued for it to the inventors and some of it is known to have been developed by many state and corporate actors. I've discussed this subject many times before with people such as Kieron Lee Perrin and Neil Sanders, see background links below. Here is Neil's book: https://www.neilsandersmindcontrol.com/index.php/2014-01-02-21-10-30/your-thoughts-are-not-your-own-volume-one. If the documents are genuine then why were they sent to a civil rights journalist? As the Daily Mail suggests, it could simply be by accident. I know many of my peers will insist that "they never do anything by accident, Ben!" I don't agree. They are not perfect; they are fallible like all people are. Sometimes they cock up; it happens. This is the most likely explanation for another recent example I've covered, see: https://hpanwo-voice.blogspot.co.uk/2018/03/twitter-voicemail-update.html. Our job is to be on standby to take advantage of their blunders. However, could this indeed be a deliberate release of something intended to look like real classified information? This would make it an act of disinformation, as some people claim the Majestic papers are, see here for details: https://hpanwo-voice.blogspot.co.uk/2017/06/new-ufo-files.html. If it is disinformation then what message is it trying to give out? What purpose does it serve? I can't think of one at present. On the other hand the documents could have been slipped into the response to Waltman by a whistleblower. Somebody who works inside the Washington State Fusion Centre who is aware of covert operations by the agency and feels distressed by being in collusion with it. This could be their way of blowing the secrecy open. If this is the case then I hope they will come to no harm as a result of their courageous action. Another possibility is that this is a hoax perpetrated by Curtis Waltman himself. I don't know if he is the kind of person who would do something like this. If he is then why would he be employed by Muckrock? What could he gain by concocting this story? We will have to see; there may be an update to this situation.
See here for background: http://hpanwo-radio.blogspot.co.uk/2017/10/programme-253-podcast-kieron-lee-perrin.html.
And: http://hpanwo-radio.blogspot.co.uk/2016/08/programme-199-podcast-neil-sanders.html.
And: http://hpanwo-voice.blogspot.co.uk/2017/05/vice-documentary-on-targeted-individuals.html.
And: http://hpanwo-voice.blogspot.co.uk/2016/09/sherlock-hounds-of-baskerville.html.
Posted by Ben Emlyn-Jones at 16:50