St Helena at the Commonwealth Games 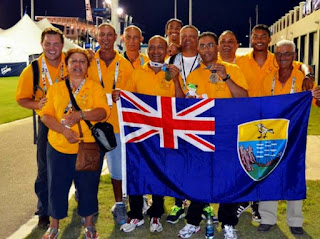 The Commonwealth Games, formerly the British Empire Games, have been held almost every four years since 1930 and have gained a reputation for being a "mini Olympics". Entrants can come from any of the fifty-three member states of the , the and the home nations of the . Countries formerly in the or Empire, such as and the , do not qualify. This year the event was held in on the Queensland Gold Coast. Team St Helena sent nine athletes, all male, to compete in four events. For the first time ever, the mission departed their island home from the new airport. They took off for with their coaches and officials on the 17th of March. From there they caught connecting flights to . The swimmer Ben Dillion competed in the 50 and 100 metres freestyle, the 50 metres butterfly and the 100 metres freestyle relay. He also carried the flag at the opening ceremony. Colby Thomas competed in the 100 metres breast, freestyle and freestyle relay; and the 50 metres breast and freestyle. Duwaine Yon swam in the 100 metres breast, freestyle and freestyle relay; also the 50 metres breast and freestyle. He trained in 's public swimming pool and the sea. Joshua Yon competed in 100 metres and 50 metres backstroke and 100 metres freestyle relay. Scott George swan the 50 and 100 metres breast. Sean Crowie was 's sole track competitor, taking part in the 100 and 200 metre dashes. Simon Henry and Carlos Yon took part in two shooting events, the 50 metre prone rifle and the 50 metre three position rifle. Vernon Smeed took part in the men's singles badminton. Sources: https://www.sainttravelltd.com/lets-meet-team-st-helena/ and: https://en.wikipedia.org/wiki/Saint_Helena_at_the_2018_Commonwealth_Games.

Unfortunately none of these competitors advanced past their heats. Well done to them for trying though. Practice makes perfect and hopefully we'll see one of them on the medal podium someday. As you can see in the links above, several of the team are expatriate Saints. Vernon Smeed is the badminton coach for the Royal Marines and lives here in , in . Simon Henry trains in where I live and I wonder if I have met him; he looks vaguely familiar. Many of the surnames of the team and their officials are the same, indicating that they are related, which you would expect considering 's population is only four and a half thousand people. Sport may well be an interest running through certain families. It's impossible to tell if the new airport has had an effect on 's athletic prowess. The team and its performance were fairly similar for the 2014 Commonwealth Games when they had to travel there and back on the old RMS, see: https://en.wikipedia.org/wiki/Saint_Helena_at_the_2014_Commonwealth_Games. I will have to wait for several more tournaments before I can say one way or the other whether the airport is a factor.
See here for background: http://hpanwo-radio.blogspot.co.uk/2016/11/programme-212-podcast-st-helena-airport.html.
And: https://hpanwo-voice.blogspot.co.uk/2018/01/goodbye-rms.html.
And: https://hpanwo-voice.blogspot.co.uk/2017/08/st-helena-airport-maiden-flight.html.
And: http://hpanwo-tv.blogspot.co.uk/2017/11/flying-to-st-helena.html.
Posted by Ben Emlyn-Jones at 20:12

Did you know that Blonde Redhead and The Presidents of the United States of America once did a gig on the island to help towards improving the roads around the island? Are you ever going to write a book about our shining green jewel of the mid atlantic? Would be nice if you could and it would definitely find a place on my bookshelf and the libraries, too.

Hi Cloyne.
I'll see what I can do. In the meantime I can recommend the author Lally Brown who has written several books about St Helena and other BOT's.
Cheers.
Ben

St Helena with the other BOT's are British billionaire's playgrounds, they are tax havens. The names of the people who own and control companies registered in the Overseas Territories must be put in the public domain.

That’s the beginning. After that, the Channel Islands and Isle of Man, which are Crown Dependencies and have a different constitutional relationship with the UK, have to be required to do the same.

Only then, once we have put our own house in order, can we demand the same of the other, non-British-linked tax havens, among them Liechtenstein, Luxembourg, Switzerland and Panama.

Why don't you ever mention this in relation to St Helena? Seems like the elephant in the room for a conspiracy theorist. Just sayin.

Hi Mark.
If I haven't mentioned something yet doesn't mean I have heard of it and don't care.
I'll take into account what you say, but the truth about St H is that is has many economic problems and there is high rates of poverty there. Hopefully the airport will ease that. It is certainly not a "billionaire's playground", although some of the other BOT's are.
Ben