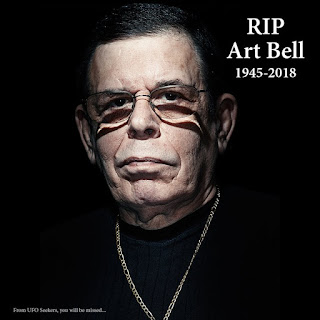 I'm very sorry to report that Art Bell has died. He was the founder, and was for many years the leading presenter, of Coast to Coast AM, the original and definitive UFO/Paranormal/Conspiracy Theory radio programme, first hitting the air in 1984, appropriately, see: https://www.coasttocoastam.com/. As such, Art has been very influential on many other UFO/Para/Con radio broadcasters, including myself. Coast to Coast lived up to its name, producing the most widely syndicated radio shows in . His guests included almost every big name imaginable in the UFO/Para/Con community, including some of David Icke's earliest interviews. Other regular superstars were Richard Hoagland, Linda Moulton Howe and Giorgio Tsoukalos. He had been semi-retired for about ten years but kept popping back. He even brought out a number of specialist programmes where he invited on past guests from classic interviews called Art Bell's Dark Matter, see: https://www.youtube.com/user/DMArchive. He occasionally brought in more mainstream people to interview such as the physicist Dr Michio Kaku. His style was always calm and gentlemanly; unlike Alex Jones and others, he never felt it necessary to become a shock-jock. For his whole career he hosted his show from a room in his house in . It is sad to think we'll never hear his distinctive catchphrases again: "East of the ..." "Wildcard line, you're on the air!" He was seventy-two years old and is survived by his widow Airyn and his four children. RIP Art Bell.
Posted by Ben Emlyn-Jones at 20:00

Shame so influential.Art and Guy leaving in the same week is tough.Rip.

True, Mark. There will never be another like Art.

Makes me wanna tune into some older shows of his, but yes I agree, he was the main man for sure!

Sad news. I used to listen to lots of archived past shows of Art on Coast to Coast AM talking about various fascinating subjects, not to mention David Icke being interviewed on the show many times during the late 90s and early 2000s (I wonder why Icke stopped guesting on the show?). But I heard it just wan't quite the same when George Noorey took over, and I have to agree. Whenever I think of Coast to Coast and Art Bell, the theme "The Chase" from the film Midnight Express comes to my mind; they used that theme during the shows intro. I think it was a perfect theme that suited a show like that.