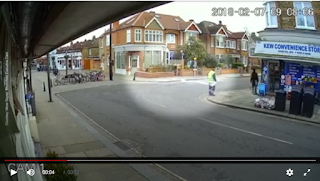 There are many disadvantages of living in an urban environment that is constantly under video surveillance, and you all know how much I've talked about that. However there are some advantages and one has emerged. For the first time that I'm aware of, an ice fall has been caught on camera. These mysterious phenomena, known formally as "megacryometeors", are very rare, but they still happen regularly all over the world. One struck a lawn in last year, see: https://hpanwo-voice.blogspot.co.uk/2017/09/another-ice-bomb.html. Where they come from and how they form is not well understood, except their structure is very different from hailstones or the lumps of ice that sometimes fall from aircraft. This incident took place on a street corner in , on the 9th of February. The lump of ice strikes the pavement and shatters into pieces, startling passers-by. Source: http://www.bbc.co.uk/news/av/uk-england-london-43006699/block-of-ice-crashes-to-earth-near-kew-gardens. Judging by the speed it is falling, it must have dropped from some considerable height. Luckily nobody was hurt. I know of no instance where somebody has been killed or injured by a megacryometeor, but several buildings have been damaged by them. The media claim this has been proven to be a chunk of ice that fell from off aircraft. It is true that the west sky houses the busiest airways in the world, but do we know for sure? Were any of the ice fragments preserved and analyzed?
See here for more details: http://hpanwo-tv.blogspot.co.uk/2013/09/out-of-blue.html.
And: https://hpanwo-voice.blogspot.co.uk/2012/09/a-rain-of-yellow-balls.html.
And: http://hpanwo-radio.blogspot.co.uk/2014/06/programme-89-podcast-manjir-samanta.html.
Posted by Ben Emlyn-Jones at 18:21

Love your Roswell books by the way.

Hi Kerry.
Goodness, you're right! No time for an article. I will have to say something on the show tonight.
Thanks very much.
Ben

Hi Ben. Forget the JFK conspiracy I've studied the MLK assassination for years now and it's far more murky than JFK. James Earl Ray was a patsy, 100%. The deep state was definitely involved and I am convinced that the Nation of Islam/Black Panthers were manipulated through MK Ultra drugs and hypnosis by CIA figures working with the FBI. The Panthers thought King an 'Uncle Tom' and stole the thunder of the more revolutionary Malcolm X brigades. Yes I've studied this for years and I've been ridiculed and lost jobs and friends because of it. I am originally from St Louis which is where the Ray family once lived and I've been to the Lorraine motel in Memphis many many times. There was no way Ray could have made that fatal shot from the bathroom of that rooming house opposite. Ballistic experts have agreed. By the way King's son also believes that Ray was innocent. Well I could go on but please Ben don't ever accept the official line. Take care buddy.