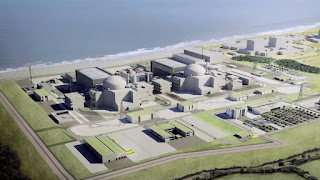 The government has given the go-ahead for the construction of a new nuclear power station to be built at the Hinkley Point site on the coast. The facility already contains two older power plants; one of them now closed. The new power station will consist of two reactors of Franco-Chinese design built by the French company EDF and their partners in . Given the unimaginative name of , the new power station will generate 3,200 megawatts of power and, along with the new Sizewell C reactors, will contribute to thirteen percent of 's electricity supply. Since 2008 the government has been working to phase out the country's aging coal-fired power stations and replace them with renewables like solar and wind farms, gas-fired plants and nuclear power. Didcot B in Oxfordshire, near where I live, has recently been transformed into just such a gas-fired plant. Constructions like these justify increases in fracking and that's just one of the pitfalls of the authorities' new energy policy. Wind farms harm wildlife. Bats are particularly at risk, being blown into the blades of the turbines at night. The turbines spoil the natural look of wilderness areas, especially in . The risks of nuclear power are obvious; radioactive pollution, what to do with the waste and the catastrophic results of major accidents like and . To be fair, the latest nuclear reactors are far more advanced and much safer than the older plants that have done the most harm, but nothing is a hundred percent safe, and the consequences of a disaster are so terrible that I think the risk is not justified, however tiny the odds.

The construction of will be one of the biggest civil engineering projects in British history. It will generate 24,000 jobs, but the cost of the programme has not yet been assessed. It will be at least eighteen billion pounds and could be as high as twenty-nine billion. This makes it even more expensive than replacing Trident, see: https://hpanwo-voice.blogspot.co.uk/2016/07/britain-renews-trident.html. At the moment there has been no final plan for the funding of Hinkley Point C. The government are reassuring us that the French and Chinese consortium will probably end up covering the costs, but I've a feeling Mr and Mrs Taxpayer are going to have to dip into their pockets at some point. Source: http://www.bbc.co.uk/news/business-37369786. This gloomy and incompetent projection for energy generation is the only one we've got; and it stretches away into the foreseeable future. There are a few exceptions though; the new "ITER" research station is gradually taking shape in the south of France, but the development of hot nuclear fusion power is achingly slow, see: https://www.iter.org/ and: http://hpanwo-tv.blogspot.co.uk/2013/04/return-to-culham.html. A few years ago Nexus magazine warned about the dirty tricks being employed by the nuclear power lobby, see: https://www.nexusmagazine.com/products/nexus-magazines/volume-14/nexus-vol-14-no-2-detail. The driving force behind the justification for nuclear power and even, occasionally and unbelievably, fracking, is the fear of man-made climate change. Environmentalists have become split over this question with "new greens" like George Monbiot and Mark Lynas coming out in support of nuclear power, despite all its dangers and disadvantages, simply because it is Carbon Neutral™, see: https://www.youtube.com/watch?v=SsjzyIszUHI. Lynas has gone on to produce a pro-nuclear environmentalist propaganda film called Pandora's Promise. As regular readers know, I think that man-made climate change is not real, see: http://hpanwo-tv.blogspot.co.uk/2016/03/merchants-of-doubt-review.html. However even if it were real, there would still be no justification for today's energy policy. When we take into account the suppression of free energy technology these questions are exposed as a phoney bone of contention; see the background links below for more detail. There are methods of generating power that are safe, infinite, simple and cost almost nothing. They were first developed successfully over a century ago and inventors are coming up with new discoveries all the time. The authorities suppress these discoveries as soon as they appear at the same time that they force us to use dirty, expensive and damaging fossil fuels; either that or dangerous nuclear power. We need to expose this agenda as soon as possible before it's too late. We can at least save ourselves a lot of bother by revealing the truth before we invest a massive amount of time, resources and effort building the new nuclear power station at Hinkley Point.
See here for background: http://hpanwo-tv.blogspot.co.uk/2015/02/energy-politics-and-ufos-2015.html.
And: http://hpanwo-tv.blogspot.co.uk/2012/12/nuclear-fusion-power.html.
And: http://hpanwo-voice.blogspot.co.uk/2015/09/environmentalist-favours-fracking.html.
Posted by Ben Emlyn-Jones at 18:27

Joi Scientific has a much better technology than nuclear.