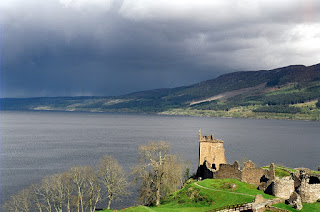 A new photograph has emerged purporting to be the Loch Ness Monster. The legendary beastie is said to lurk in the opaque waters of 's largest lake. It has been seen by people since ancient times, but after a major road was laid along the shores of Loch Ness in the early 20th century, the rate of sightings dramatically increased. There are numerous photographs and pieces of film footage of the Monster, some more credible than others. This latest one was taken by a man familiar with Scottish traditions because he works at a distillery warehouse, so he spends his occupational existence alongside barrels of whiskey. Ian Bremner is also a keen amateur photographer. He says he took a series of shots of Loch Ness and saw nothing unusual, but when he returned to his home in Invergordon and examined the photoes in more detail he spotted something strange. There was what looked like a lithe, grey serpentine creature slithering through the water. The picture has gone viral, see: http://www.express.co.uk/news/uk/711291/Loch-Ness-Monster-found-at-last-new-photo. Of course a storm of controversy has raged since the picture was published on Sunday. To be honest, I am dubious myself. Mr Bremner claims he never noticed the creature at the time he took the shot, however the image published has the alleged Nessie as its centrepiece. This means it must have been cropped from a larger image. Do we know that it was taken at Loch Ness at all? All we can see is a stretch of water. That could be in any lake, river or sea. There's no way to be sure without Mr Bremner showing us the original photograph. For all I can tell, he might have gone down to the harbour at Invergordon and taken it there. The front part of the subject looks like a seal to me. In fact this could easily be a picture of three seals swimming along and jumping out of the water. Despite my misgivings I'm sure the Loch Ness Monster exists. It's popularly portrayed as an aquatic reptile, but I think it's more likely to be some kind of fish. See background links below for more details. What counts in this case is the same as what counts for UFOlogy and ghost hunting. If Mr Bremner is presenting this as a photo of Nessie when he knows it is not then he is doing cryptozoology a great disservice. The signal to noise ratio is bad enough as it is without any extra noise. There's another problem. When writing this article I wanted to illustrate it with the picture in question, but when I tried to save it from Google Images it wouldn't work. Is it copyright protected? If so this might indicate the owner is carefully guarding his usage rights. Has he made a financial arrangement of some kind with the distributors?
See here for background: http://hpanwo-tv.blogspot.co.uk/2011/06/fake-alien-videos.html.
And: http://hpanwo-voice.blogspot.co.uk/2014/02/is-nessie-dead.html.
And: http://hpanwo-radio.blogspot.co.uk/2013/06/programme-51-podcast-cryptozoology.html.
Posted by Ben Emlyn-Jones at 16:11

There is in no doubt that we are looking at seals here.

That's what they look like to me too, Anon. Mr Bremner has some explaining to do!