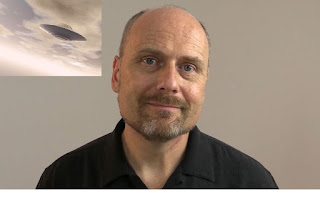 Over the last couple of years I've been closely following the lectures of Stefan Molyneux. This Canadian philosopher has one of the most popular YouTube channels and he covers everything from politics, economics and the media to family relationships, psychology, history and sociology. I find him very interesting to listen to, even though I don't agree with him on everything. Every so often he does a live call-in show and he brings on listeners to discuss various subjects. A short while ago he did one on UFO's, see: https://soundcloud.com/stefan-molyneux/fdr-3417-the-great-ufo-debate-yes-really-call-in-show-september-14th-2016. Although Stefan accepts the possibility of extraterrestrial life, he is skeptical about UFO's. The first guest, "Victor", is a keen UFOlogist and tries to persuade Stefan that UFO's are real. Victor claims to be an engineer and scientist and uses logic to try and explain his position. Stefan is intellectually honest and genuinely curious, but makes a number of mistakes that come from a lack of knowledge. He asks questions about how UFO's perform the manoeuvres that they do, which is impossible according to our science. Victor rightly points out that this is literally correct, but it doesn't mean therefore UFO's aren't real. Stefan keeps coming back to the point that speculation about unknown alien technology is not an explanation for what UFO's are doing. That's technically true, but Stefan seems to think this is evidence that UFO's themselves are not real. I don't gather how that necessarily follows. He even compares it to appealing to magic which is foolish. Victor outlines the role of the state in UFO secrecy and Stefan doesn't address it, which is unexpected because Stefan Molyneux is a dedicated anarchist. He also anthropomorphises the aliens as well. He assumes they're free market capitalists and not government-run, so he asks "where's their shopping mall?" This is assuming the ET's are similar to us in terms of their psychology, economics and politics. We can't make that speculative leap in my view. This is also why he misunderstands the abduction phenomenon and the way UFO's stop car engines. Stefan scorns the idea of alien implants, but doesn't address what Victor says about Dr Roger Leir's work. He also ignores other valid evidence Victor presents like the invasion. He assumes UFO's fly from other planets at below the speed of light and are not interdimensional. This interaction between Stefan Molyneux and Victor is a warning of how knowing a lot about one subject has no bearing at all on how much a person knows about something else.
See here for more details: http://hpanwo-voice.blogspot.co.uk/2015/05/dr-david-clarke-at-greenwich-sitp.html.
And: http://hpanwo-voice.blogspot.co.uk/2014/03/dr-roger-leir-dies.html.
And: http://hpanwo-voice.blogspot.co.uk/2015/06/my-implant.html.
Posted by Ben Emlyn-Jones at 19:18