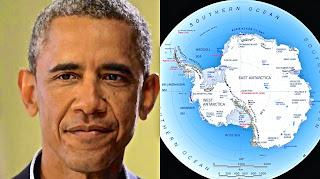 It seems there's something strange going on in . The great south polar continent has always been a land of secrets, but this year the level of covert activities has broken through the pre-existing ceiling. There is no solid proof here, but there is a series of coincidences that is long enough to be noteworthy. In February a historic meeting took place between Pope Francis and Patriarch Kirill, head of the Russian Orthodox Church. This meeting was arranged "as a matter of urgency" and took place in . This is the first time the Roman Catholic and Eastern Orthodox churches have had any formal communication for over nine hundred and fifty years. This meeting was ostensibly to address the crisis caused by the persecution of Christians, of all denominations and sects, in the and across the world by "Mohammedans"- ISIS. However after this meeting, Patriarch Kirill did not take further action to protect his people; he instead jumped on a ship and headed for the last place on earth you'd expect, . He landed at the Russian research base of Bellingshausen on just off the coast of the continent. He gave a mass in the famous of the Holy Trinity, the most southerly Russian Orthodox church in the world. He then blessed the land and sea and visited a local penguin colony. He said: " is the only place where there are no weapons, military activities or scientific researches aimed at creating new means of people’s destruction. That is some kind of an image of ideal mankind and a sign that people can live without borders, weapons, hostile rivalry; that people can feel as members of a single family." That sounds a bit Agenda 21 to me. Also what he said about military activity at the South Pole is either hopelessly naive or a lie. The Patriarch of Moscow and all is not just a religious leader, he is very powerful politically as well. He is more on the level of the Pope than the Archbishop of Canterbury in authoritarian terms. At the moment he is highly supportive of President Vladimir Putin, calling him a "miracle of God". The visit of such a prominent figure in Russian society to the nation's south polar outpost is highly symbolic. Source: https://www.rt.com/news/332835-patriarch-kirill-antarctic-penguins/.

There is no direct evidence that Barack Obama visited Antarctica, but it has been reported in an Argentine newspaper in March that the US President was in the middle of a state visit to Argentina in March of this year when he made an "unscheduled" visit to the south of the country, see: http://www.buenosairesherald.com/article/209987/obama-to-extend-trip-to-argentina-with-patagonia-visit. Was there time for him to cross the and visit and be back again before too many people became suspicious? is also rumoured to be a Nazi stronghold in the post-war years and there was a transport system between there and the German occupied Antarctic . Oddly enough just before World War II there was a scramble for presence on the Earth's southern continent. In the case of I believe it was a refuge for Hitler and his henchmen after the end of the war. One of the priorities of the German Antarctic Expedition of 1938-39 was to generate accurate maps of the icecaps and mountains. What is the purpose of this new governmental focus on ? Is it because the Elite are planning a third world war? Source: https://www.youtube.com/watch?v=B97kDYEIWvE. I don't believe the earth is hollow, but there may well be large underground cavities we have yet to explore, especially under , like , see: http://hpanwo-voice.blogspot.co.uk/2012/02/lake-vostok-breached.html. At the same time Obama was allegedly in , his Director of the Central Intelligence Agency, James Robert Clapper, paid a visit to . The purpose of this visit is unknown, but it has been confirmed by the US Embassy in , see: http://mobile.abc.net.au/news/2016-03-16/us-spy-boss-makes-secretive-visit-to-australia/7251590. A lot of people in places of geopolitical power have been south of the equator lately. It seems an odd synchronicity that this information has come my way just a few days after I found out that the man I call "Jack of the Antarctic" has died, see: http://hpanwo-tv.blogspot.co.uk/2016/09/jack-of-antarctic-rip.html. Thanks very much to my partner Susan (Ustane) for bringing this to my attention.
See here for more background: http://hpanwo-voice.blogspot.co.uk/2015/02/you-really-dont-like-russia-do-you.html.
And: http://hpanwo-voice.blogspot.co.uk/2015/08/russia-disclose-ufos-or-we-will.html.
And: http://hpanwo-voice.blogspot.co.uk/2015/04/crashed-ufo-in-antarctica.html.
Posted by Ben Emlyn-Jones at 17:22

They all went to visit the firmament or rather the glass Dome.

Yes, there is an inordinate amount of high-level interest in Antarctica lately. I cannot imagine what drives that interest, but it seems to me to be more of a sight-seeing effort. Whatever these specific individuals are going to see, it remains a secret.

I do know that the US has a very powerful space telescope down there. It views objects in the southern hemisphere, particularly objects in the due-south area of space. There are many unexplained celestial bodies appearing in New Zealand and Australian sky-cameras, so maybe this is the draw. But I sense that it is something else.

I checked the linked article out and guess who Obama took with him? NASA. Also, guess who was also in Australia the very same day (March 4th, 2016) as Obama was in Argentina? James Clapper, Dir. of National Intelligence. He had a secret meeting with someone in Australia (probably the Prime Minister) and he also met the previous day with New Zealand's Prime Minister, John Key. Key is a devoted Obama lackey.

Russian Patriarch Kirill met the Pope for the first time in 1,000 years and immediately flew to Antarctica. Date: Feb. 18th, 2016.

So Obama with NASA beside him, Kirill and Clapper all in or adjacent to Antarctica within a two-week time frame.