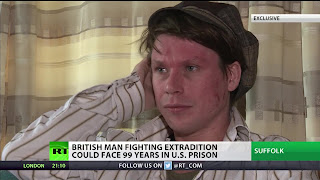 The only decent thing Theresa May has ever done is block the extradition of Gary McKinnon to the United States of America for hacking when she was Home Secretary, see: http://hpanwo-voice.blogspot.co.uk/2012/10/gary-mckinnon-free-man.html. Now Lauri Love, another British citizen, is facing the same fate as and his position looks far more precarious because the law has been changed since McKinnon's liberation. Today the decision whether or not to extradite wanted persons to the cannot be made unilaterally by any politician and is purely in the hands of the judiciary. There will be a ruling next week on Lauri's fate from a magistrates court. Mr Love is accused of hacking computers for political motivations; "hacktivism" as it has become known. Like McKinnon, the British-Finnish engineering student has allegedly hacked into US government servers including those in NASA, the Department of Defence, the FBI and the banks of the US Federal Reserve. He's also said to have accessed the databases of several healthcare companies; he has taken personal and financial details, although the authorities admit no money has been stolen. He is supposed to be a member of Anonymous, the famous worldwide hacktivist group. He was arrested at his family home in in 2013 after supposedly taking part in "Operation Last Resort", a revenge attack on the American authorities for the death of Aaron Swartz, a young political activist who committed suicide after being prosecuted for hacking a university. Under law, hacking is a far more serious offence than it is in . Here a convict faces no more than three years in jail; in the he could be imprisoned for up to ninety-nine years, effectively a full life sentence. For this reason many of the accused accept damaging plea bargains that result of them receiving lighter sentences out of court. In these cases no evidence against them is ever tabled and the offender cannot defend himself. As I've said before, this acts as a deterrent against anybody who tries to bring the government to account for their actions. We've seen the same thing with Julian Assange and Edward Snowden, see: http://hpanwo-voice.blogspot.co.uk/2015/10/assange-and-snowden-latest-bombshells.html. It's also clear that nobody is safe; wherever you live in the world the government of your nation will roll over and submit to the globalist willpower. Love's lawyer says that there is a war on whistleblowers. The powers-that-be are using legal systems to shut down and lock up hackers motivated by conscience; and also they want to terrorize anybody considering hacking in the future. Like Gary McKinnon, Lauri Love suffers from Asperger's syndrome. He has had a nervous breakdown as a result of his prosecution and has come down with eczema. He harms himself by scratching his skin with his nails. If he ends up in an American prison he will held under maximum security in solitary confinement. He will probably not live long. Like Aaron Swartz, he believes he will take his own life. Here's Lauri Love's support website: https://freelauri.com/.
See here for additional information: http://hpanwo-voice.blogspot.co.uk/2012/08/julian-assange-at-ecuador-embassy.html.
And: https://hpanwo-voice.blogspot.co.uk/2014/05/new-edward-snowden-interview.html.
And: https://hpanwo-voice.blogspot.co.uk/2015/06/ditchley-park-on-internet-security.html.
Posted by Ben Emlyn-Jones at 17:54