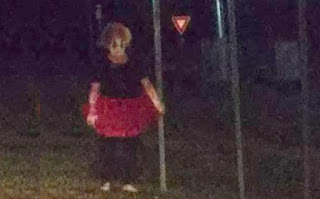 In 2014 several places experienced a very odd phenomenon; humanoid figures were spotted wandering the streets that looked rather like circus clowns. This began in and quickly spread. See background links at the bottom for details. A clown is a comic performer, usually male, wearing grotesque and colourful clothing, also distinctive makeup which exaggerate the facial features. They're usually associated with the circus and perform slapstick comedy acts. Psychologists theorize that clowns represent something very deep in our subconscious collective minds. Clowns can sometimes be malevolent adversaries as well as humourous protagonists; good examples of evil clowns are Pennywise in Stephen King's horror story It; as well as the Joker in the Batman franchise and Mr Jelly from the TV sitcom Psychoville. They go much further back in history than I thought; they can be found in the ancient world, in fact their origins are shrouded in mystery. In Jungian psychology clowns might represent an archetype, maybe that of the "trickster". What is fascinating is that people experiencing altered states of consciousness sometimes encounter beings that look and behave like clowns. Dr Rick Strassman is a research psychiatrist who in the early 1990's carried out an experiment that involved giving doses of the powerful psychedelic drug DMT to human volunteers. Over twenty years earlier Dr Sanislav Grof did the same with LSD, see: http://www.rickstrassman.com/. He reports that his subjects sometimes saw clowns. I strongly recommend Dr Strassman's book DMT- the Spirit Molecule for more details. Now the clowns are back, this time the outbreak is centred on the and began in . In this new reemergence the clowns are exhibiting far more malevolent behaviour than previously. The first report came on the 30th of August from the town of in which a clown tried to lure a group of children into some woods. Since then more clowns have been spotted in , and . In a witnessed photographed a clown and published the picture on social media to warn others. Source: http://www.telegraph.co.uk/news/2016/09/20/creepy-clown-sightings-are-spreading-across-the-united-states/. What's going on here? If this is a prank by students (Why do students always get the blame for this sort of thing?) then it is widespread and elaborate. It could be an unorganized meme, but then I'm surprised we've had no media interviews with the perpetrators. The connection to children in the case is very worrying. Folklore is replete with tales of unearthly creatures who demand the lives of children. The fear of "blood libel" carried out by Jews against Christians was shown to be ungrounded, but could it have been inspired by a real primeval dread? The Cailleach of Irish mythology is a good example. It is described as a vicious old hag that snatched babies from cribs. This will most likely turn out to be a trick carried out by a group of completely normal humans, but it's too soon to rule out other possibilities. If beings from other worlds are appearing in our universe more often than they used to, why is this? Could it once again be a result of operations at CERN? See: http://hpanwo-voice.blogspot.co.uk/2016/08/cern-occult-ritual.html. The skeptic paranormal investigator Benjamin Radford has just written a book about bad clowns, see: http://benjaminradford.com/books-by-ben-radford/bad-clowns-benjamin-radford/.
See here for background: https://hpanwo-voice.blogspot.co.uk/2014/03/clowns-roaming-streets.html.
And: https://hpanwo-voice.blogspot.co.uk/2014/03/northampton-clown-update.html.
Posted by Ben Emlyn-Jones at 17:03

DAVID BOWIE ALWAYS REFERRED TO THE ELITE THE ILLUMINATI EITHER 'THEM' OR 'THOSE CLOWNS' ONE SONG WHEN HE WAS SINGING ABOUT AN EX SUSAN SARENDON WHOM I DONT TRUST GOES OFF WITH THOSE CLOWNS. PLUS HE CALLED SPIES OR WHRN HE WAS SET UP WITH A TRANSVESTITE IN BERLIN HE SAYS BASICALLY HE WAS SILLY THAT WAS PATROL. HE CALLED THEM THE PATROL BEING FOLLOWED WATCHED ETC

Don't forget Ronald McDonald who would lure children to eat 'food' that does not spoil and that flies avoid!

Anon, thanks for the info.

Blimey, you really didn't need to describe what a clown is Do you really assume everyone bar you is so utterly ignorant and does not know how to use Google?

No, William. I CHOOSE to describe what a clown is. If you go on the defensive so badly just because of that then you need some pills.

You can't think much of the intelligence of the people you aim your writing at, BEJ. To those people: if you feel you need to follow someone who thinks you don't know what a clown is then you deserve each other. Jesus wept, he really ruddy did!

What's it to be? Prozac or Thorazine?

Neither really, tried both and they didn't work. So are you suggesting that if a person criticises your great work they are mentally unstable in some manner? Or are you flipping it round, because it is normally the skep that suggests psychiatric drugs for the woo? But I realise you struggle with originality, but still you go girl!

I wish were you. You are such a bright young go getter taking on the big bad world. How do you do it? One minute you're Joe Bloggs (excuse the pun) with nothing and the next the entire conspiracy population of Lytham St Annes is at your mercy. You lucky, lucky bastard! So my 41/42 year old acquaintance when are we going to see you break free from the UK and go all out for that World Tour? What's that? Hmmm, didn't get that? No what? Sorry? Look you'll have to speak up I can barely? No passport. Well get a new one then...why not? Oh FFS grow up man. They are only £70 something and a fiver for photos. I bet you don't know anyone intelligent enough to countersign it that's why isn't? Go on admit it, hmmm! Lol.