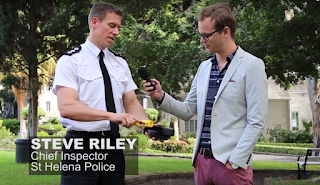 The dark side of 's new international age is already manifesting despite the fact that the airport has still not yet fully opened, see background links below for more details. The St Helena Government has announced that the island's police are receiving training in how to use tasers, a supposedly "non-lethal" weapon. is part of the British Overseas Territory of Saint Helena, Ascension and ; and it has a unified police force consisting of just seventy officers. There are sixty-three on and six on . has just one full-time officer with three special reserve assistants. Small and isolated settlements tend to have very low crime rates and seems to be no exception according to the UK Government's foreign travel advice page; this is despite worrying levels of poverty there. So why are tasers deemed necessary? The St Helena Government has reassured us that this weapon will not be routinely carried by officers on duty, but the option will be there to issue it with permission of a senior officer. However, the very fact this policing method has been introduced must sound strange to the Saints, I imagine. Tasers are far from "non-lethal" in practice. Only a few weeks ago the former Aston Villa footballer Dalian Atkinson was killed by one, see: http://hpanwo-voice.blogspot.co.uk/2016/08/ex-footballer-killed-by-taser.html. He is just one of over a hundred people who have died under the electrodes of police tasers since its invention. It has also been revealed that the police are training with standard firearms too. Source: http://www.sainthelena.gov.sh/police-service-developing-firearms-taser-capability/ and: https://www.youtube.com/watch?v=R_auUdgR3dQ. What's going on? Are the authorities on the island tacitly preparing for a change in society in which levels of antisocial and unlawful behaviour are predicted to rise?
See here for background: http://hpanwo-voice.blogspot.co.uk/2016/08/st-helena-airport-update.html.
And: http://hpanwo-tv.blogspot.co.uk/2016/06/st-helena-airport-opens.html.
And: http://hpanwo-tv.blogspot.co.uk/2014/06/st-helena-airport.html.
Posted by Ben Emlyn-Jones at 16:41