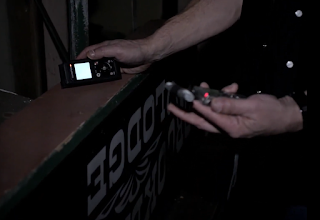 Regular readers will be familiar with Don Philips. He's a paranormal field researcher who specializes in EVP, or as he calls it "AVP- Actual Voice Phenomenon". I collaborated with him on several projects a few years ago and he has been on HPANWO TV and HPANWO Radio, see background links below. Since then he has continued his work, sometimes travelling to distant places, like . He has produced a pilot episode for a series called American Supernatural in which he joins forces with a team called the Santa Cruz Ghost Hunters to answer one of the biggest questions anybody asks: Is there an afterlife? To try and provide a solution to that mystery, Don and the team visit a famous hotel called Brookdale Lodge in California USA where stars and millionaires used to stay. Apparently the hotel has suffered three major fires in its hundred year history, which is a sign that something is energetically amiss with the place, like Boleskine House, see: https://hpanwo-voice.blogspot.com/2019/08/boleskine-house-burns-again.html. It has also been the scene of crimes and tragedies, like the , see: https://hpanwo-voice.blogspot.com/2021/03/elisa-lam-netflix-docu.html. There are dramatic reconstructions of some of them. Maybe this has something to do with the distasteful things people in the entertainment industry are alleged to get up to, see: https://hpanwo-voice.blogspot.com/2019/08/jeffrey-epstein-death-portal.html. Either way, numerous paranormal phenomena have been reported there by staff and guests alike. Don has given me a preview of the pilot so I can let readers know what it's like and hopefully you'll want to watch the series when it is released onto the TV. Like Aleister Crowley's old Loch Ness residence, Brookdale Lodge has a new owner who wants to restore it and preserve it as an historical landmark. The hotel is a fine sight, with a large indoor garden with a real stream flowing through it. Will that have any effects on its supernatural factor?
Don Philips and the Santa Cruz Ghost Hunters pay the Bookdale Lodge a visit to see what evidence they can discover. It doesn't take long to find some. As soon as they enter a bedroom the camera picks up the voice of a child, just a brief murmur, but it's very distinct. Another two are picked up in the kitchen and several other areas. One is a male voice that mentions "Becky". This is the name of Don's spirit guide. Interestingly it sounds like it has an English accent, even though this is in the . A feminine voice then introduces itself as "Marilyn". This made everybody wonder if it might be the famous actress Marilyn Monroe, who had stayed at the Brookdale Lodge. Don tried an experiment by seeing if a spirit could move a neutrally ballasted party balloon. He did a similar one using a coin at the pub in Leicestershire, see background links. The hotel includes a derelict section full of discarded telephones and vending machines, obviously very old; as if nobody had entered those rooms for a long time. More EVP's were collected there. The electronic voice phenomenon is a highly contested method which some investigators believe is useless and misleading. I explain here why I think that is not true: https://hpanwo-voice.blogspot.com/2014/10/bbc-on-evp.html. The investigation reaches a thrilling climax when Ian Gunner, the cameraman and a mutual friend of Don's and mine, announces that one of the team has discovered a tunnel. It is next to the stream in the indoor garden room. Don puts on a miner's light and crawls along it, even though he can barely fit. It reminded me of Richard Dolan climbing down a ladder at Montauk in UFO Hunters. Would I have done that?... I'm not sure. Don communicates with the rest of the team by walkie-talkie. He takes an EVP recording, which is the only place in that room he was able to because the noise of the stream prevented it elsewhere. He succeeds, even in there. He also finds a strange out-of-place artefact. This programme is thrilling and intriguing. Most of the shots are from handheld cameras, giving the viewer a sense of presence. Thanks to Don for the preview. Keep a lookout for the show when it hits the screen and I hope there will be more in the series.
See here for background: https://hpanwo-radio.blogspot.com/2015/07/programme-147-podcast-phenomena-project.html.
And: https://hpanwo-tv.blogspot.com/2013/12/ghostly-goings-on.html.
And: https://hpanwo-voice.blogspot.com/2014/06/don-philips-at-woodchester-mansion.html.
And: https://hpanwo-voice.blogspot.com/2014/02/evp-ghost-debate-don-philips-with-ben.html.
Posted by Ben Emlyn-Jones at 17:53