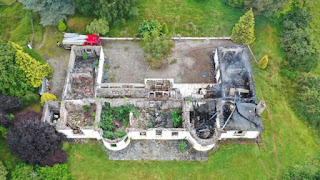 In December 2015 Boleskine House in was consumed by a massive fire, see: https://hpanwo-voice.blogspot.com/2016/01/boleskine-house-fire.html. The large house on the shores of Loch Ness was formerly the home of the famous occultist Aleister Crowley. Because of some magick spells he cast there in 1899 the building has a dark and frightening reputation. It was this very reputation that attracted the rock star and fan Jimmy Page to the location. The guitarist and songwriter for the band Led Zeppelin bought the property in 1970 and used it mostly as a storehouse for his collection of occult books, many of which were written by . Page sold it in 1992 and it was turned into a hotel; although many guests only stayed there once after they experienced things going bump in the night. Some ghost enthusiasts booked rooms because of the house's supernatural mystique. Following the 2015 fire, a new owner purchased the ruins and planned to restore the house. However this second fire appears to have sadly destroyed what was left of the house's interior and roof. I'm not sure if this time the damage is beyond repair. The fire also spread to the neighbouring Coach House, but it was quickly extinguished. The police suspect this was an arson attack and are appealing for witnesses. The part of the house that ignited was the side that had been spared by the 2015 fire. Source: https://www.bbc.co.uk/news/uk-scotland-highlands-islands-49186622. If it was arson, who would do that? Does anybody have a motive to torch a derelict house miles from any town? Somebody suggested religious fundamentalists could have done it. The does have a tradition in radical Christianity, being home to the "Wee Free" Free Church of Scotland. There may well be people nearby who are uncomfortable with 's den of superstition in their neighbourhood. Another of 's homes in has the same problem. However the locals there are too scared to demolish the old Abbey of Thelema in case they get curses, so conversely to Boleskine, it is fairly well preserved, see: https://www.youtube.com/watch?v=98KxHMyr7xU. Either way, such torch-and-pitchfork pogroms tend to be things of the past, such as during the Scottish Reformation in the fifteenth century. Religious violence in today comes mostly from Islam. Could the arsonists have a very different background, possibly one that is not even of this world? Nexus magazine recently published an article, in its June-July 2019 issue, about fire and the paranormal; its connection to poltergeist activity and spontaneous human combustion. See: https://nexusmagazine.com/?v=79cba1185463. The Scottish paranormal radio show host Kev Baker visited the ruins of Boleskine after the 2015 fire and he and I discussed it on his show, see: http://kevbakershow.com/. We noted the similarities to the fire damage in the house to that following many spontaneous human combustion cases. The conflagration left the targeted area totally charred, but nearby areas were completely undamaged, not even scorched or melted. For the last hundred and twenty years there has been an open portal in Boleskine House to alternate realms where God knows what lurks; whatever Crowley was trying to conjure up. We know that he was utterly fearless in his pursuit of ghostly denizens. If Boleskine House is restored again then I recommend somebody who knows what they are doing, maybe Jimmy Page, performs a ritual there that can close the portal and give the ghosts infesting it licence to depart.
See here for more background: https://hpanwo-voice.blogspot.com/2017/12/second-burning-man-dies.html.
And: https://hpanwo-voice.blogspot.com/2008/07/beijing-olympics-2008-logo.html.
And: https://hpanwo-voice.blogspot.com/2018/01/ben-emlyn-jones-on-kev-baker-show-29.html.
Posted by Ben Emlyn-Jones at 21:35