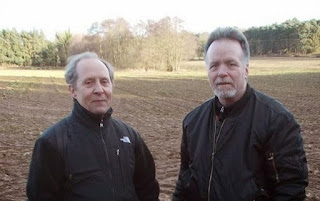 I have been made aware of a recording of a private discussion involving Peter Robbins. I have listened to it and can positively identify Peter's voice in it. The recording was made after the broadcast or recording of a programme on the KGRA Radio network, see: https://kgraradio.com/, and it was never intended to be published. Peter launches into yet another tirade against his former co-author Larry Warren. As usual, Peter laments about how difficult it is for him to have "this dragging along behind my life" when he himself is the one who is perpetuating it. He chastises Larry for being abusive and slanderous when all the aggression and deception is coming from Peter and the trolls beside whom he has raised his standard. As always with Peter Robbins, most of his dialogue is not worth a reference because it is his customary waterfall of rhetoric, slushiness and self-pity. Along with the lies and defamation we have heard before, Peter claims that Larry is denying he made the statements he did when he spoke of how he had visited Ground Zero. The truth is that Larry did visit Ground Zero, but he never said that he was part of the professional first responder team. This is a typical example of the trolls twisting people's words. Peter talks about a "small team of investigators in the " which of course means Sacha Christie and her collection of beta-orbiters. He calls Larry a "coke head" and I don't think can be interpreted as Larry being fond of a popular brown coloured soft drink. Bear in mind that Col. Charles Halt also made groundless allegations of Larry's supposed drug addiction and Larry had to seek advice from a solicitor, see: https://hpanwo-tv.blogspot.com/2015/07/colonel-halt-returns-to-rendlesham.html. Peter also says Larry is an alcoholic. Well, I've spent several days at a time in Larry's company and he has not touched a drop. I've known real alcoholics in my life and I know that they can hardly get out of bed without gulping down several cans of beer. What Peter said is absurd and insulting. He also accuses Larry of manipulating his ex-wife Sue. I know Sue as well and can assure you this is totally false. Sue is the mother of Larry's son Dennis and the two parents are raising their child together. As a single parent myself I know exactly what is involved with that and I'm close to my ex-partner, my daughter's mother, too. Sue despises the hate campaign against her ex-husband as much as his other friends do. Peter requests that the show's hosts share on their social media pages his various statements about Larry and the one about me which Peter calls "this anti-Semitic attack!" He adds that this was instigated by Larry; how can even he tell a lie like that? In fact Sue's family has a Jewish line which would make Dennis partly Jewish. How can Larry possibly instigate an anti-Semitic attack? I have made a full response to that sordid episode here: https://hpanwo-radio.blogspot.com/2019/06/programme-326-podcast-what-else-really.html and: http://hpanwo.blogspot.com/2019/02/the-robbinsic-12-document.html. Along with his vitriol, Peter reveals an interesting piece of information that I had not heard before. There is a "downloadable book" coming soon in which the trolls' assertions will be listed. I don't know if this is the long (un)awaited book Sacha Christie boasts that she's writing called The Warren Decommission (Groan!). She has been promoting this title since 2015 but I don't see it on the shelves yet. Maybe it is something Peter has compiled himself instead. Either way, expect to read a review of it from me. However, seeing as I have categorically exposed everything Sacha, Peter and their motley crew have said as a total fabrication already, see background links, I don't expect my critique to be very lengthy. Peter moans that he wants Larry and his supporters to go away and leave him alone; well, as long as he maintains his deceitful activities, we're not going anywhere!
See here for background: http://hpanwo-voice.blogspot.com/2019/08/larry-warren-gossip-update.html.
And: http://hpanwo-voice.blogspot.com/2016/12/is-larry-warren-fraud.html.
And: https://hpanwo-tv.blogspot.com/2017/05/larry-warren-in-rendlesham-forest-2017.html.
And: http://hpanwo-voice.blogspot.com/2017/09/the-larry-warren-controversy-part-22.html.
Posted by Ben Emlyn-Jones at 22:31

Peter Robbins has riden on Larry's coattails since the book Left at Eastgate was published. I never personally met Peter, but formed my opinion back at the beginning after listening to both Larry and his mother Joann. Joann didn't originally interpret what was going on the same way I did, but eventually saw the same thing from Peter.

There is no way Larry has bullied me hahaha, into saying anything Mr snake Robbins how dare you speak for me! I have my own mind and opinion. It seems to me Peter Robbins has a week mind as he is now officially a Troll deciple of Sacha Christie how embarrassing for him to be influenced by her! Larry did go home after 9/11 I was all for that why wouldn't I be hes from New York for Christs sake, with family there experiencing the worst terror attack in history. Stop talking bull Peter you know you are,and yes I did know you well and you're as fake as he'll. Youve travelled around the world at everyone else's expense without putting your hand in your pocket Mr nice guy don't think so!