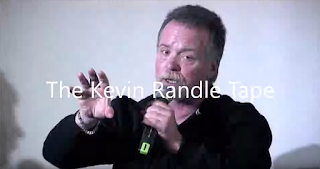 See here for essential background: http://hpanwo-voice.blogspot.com/2019/07/more-anti-larry-warren-gossip.html.
There have been some major developments since I posted the background article above. One of the two interviews Kevin Randle refers to has been published. This is a tape recording of a conversation in 1995 between Larry Warren, Peter Robbins and Kevin Randle. Outer Limits Magazine have published a digitized version of the recording on their YouTube channel, see: https://www.youtube.com/watch?v=F0EY5YgEaJI. Larry and Kevin do most of the talking and Larry describes his UFO experience. He also shows Kevin some of his documentary evidence. Kevin asks Larry many questions, about his US Air Force service and discharge; and about the timeline of events. I have listened to all forty-seven minutes of the tape and personally I can't find anything in its content that is incriminating. In fact it contains very little information that I have not come across before. This may be a newly published audio record, but it includes no major original information. Kevin makes a big deal about how Larry only had direct contact with the UFO on one night during the flap. However, this is what Larry reports in Left At East Gate. Why is this news? Not just any news but some kind of earth-shattering scoop that will prove Larry's duplicity once and for all!? There is also something strange I've noticed about the video on the technical side. When I started watching the video last night it had nine thumbs up and seven thumbs down; I added an eighth. When I looked at it today it had ten up and one down; the one down was mine. Since then, about six hours later at the time of writing, that record has not changed. YouTube users cannot alter the like-dislike bar on their uploads. Only the person who made a preference can remove their thumb. So, how did this happen? If a video receives a ratio of dislikes too far in excess of likes then the video is lowered in terms of visibility. So, does somebody in the offices of YouTube want this video to have as high a profile as possible and is fiddling with the like-dislike bar to boost it up? The implications of that are astounding and very sinister. Outer Limits claim to be strictly impartial when it comes to the Larry Warren controversy; and indeed the editor, Chris Evers, even offered Larry the chance to put his own side of the story across in the magazine, see: https://hpanwo-voice.blogspot.com/2017/01/is-larry-warren-fraud-part-5.html. However I found myself doubting those professed sentiments when I was banned from their 2017 conference, see here for details: https://hpanwo-voice.blogspot.com/2017/03/the-larry-warren-controversy-part-10.html and: https://hpanwo-voice.blogspot.com/2017/04/im-banned-from-conference.html. Those doubts are now redoubled when I look at the cover of the latest issue and see that it says: "Including a special report and link on the Larry Warren fraud!" That doesn't sound like the words of a neutral arbiter to me. (The cover was changed later to remove that text, but luckily I have screen-grabs of the original.) Despite this original blurb, Evers has written: "...we examine statements from Larry Warren re: his involvement in the RFI, and the fact that Kevin Randle recently presented documentation suggesting Warren had admitted he wasn't involved, needless to say Warren denied this and demanded that Kevin Randle prove this statement with evidence. Kevin Randle kindly supplied a copy of a recorded conversation with Col. Charles Halt, Peter Robbins and Larry Warren and others. Make of this what you will..." Source: https://www.facebook.com/spuras/posts/10220386157750472. Obviously there is no way to know what conversations are going on in the offices of Google, but I strongly suspect that some operation is underway that certain individuals in UFOlogy know about and are not telling the public. When we combine this with the bizarre irregular editing of the like-dislike bar on Randle's tape recording, it is likely there are covert forces involved in this case, and that's never something I assert lightly... Cue the article by Nick Pope!
See here for background: http://hpanwo-voice.blogspot.com/2016/12/is-larry-warren-fraud.html.
And: http://hpanwo-voice.blogspot.com/2017/09/the-larry-warren-controversy-part-22.html.
And: https://hpanwo-tv.blogspot.com/2017/05/larry-warren-in-rendlesham-forest-2017.html.
And: http://hpanwo-tv.blogspot.com/2016/06/scottish-ufo-and-paranormal-conference.html.
Posted by Ben Emlyn-Jones at 23:04