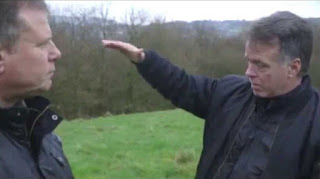 I have been informed by a source that I cannot name that the malicious lies that have been propagated about Larry Warren over the last few years are still out there and have been just been boosted into another round of circulation. My source has shown me images that look like screenshots of conversations on social media between several UFOlogists repeating the falsehoods that have emerged over and over since the Scottish conference in 2016, see background links below for details. However one of the names mentioned is a new one when it comes to this subject matter, Kevin Randle. I don't know Kevin Randle personally, but I have studied his information for a number of years. I've read one of his books and check his blog every now and again, see: http://kevinrandle.blogspot.com/. He specializes in the Roswell Incident and was one of the lead investigators into the event, along with Stanton Friedman. He also played a major role in the effort to avert the Roswell Slides debacle of 2015, see: https://hpanwo-voice.blogspot.com/2017/05/roswell-slides-update.html. The documents sent to me are supposedly personal communication in which Randle casts doubt on the authenticity of Larry Warren's testimony. He refers to a taped interview he has in his possession which features Halt and Peter Robbins in which Larry confesses that he was not involved in the Rendlesham Forest UFO incident. Randle also allegedly claims there is evidence in Larry and Peter's book Left at East Gate. The tape has never been published to my knowledge. Randle, according to this document, then says: "It is clear heard others talking about it and plugged himself into the story... is not to be believed." The document also states that Randle shared a transcript with a British UFOlogist, Philip Mantle. The document I was sent has Philip quoted. The transcript is of a 1986 interview in which Linda Moulton Howe asks Larry questions and Larry admits the he plagiarized his UFO experience from Adrian Bustinza. Again, I don't think this material has been published. Randle also makes the point that Peter Robbins has completely disowned his former co-author. As regular readers will know, I am convinced that everything said here is totally false. I can provide material that I believe proves it and I include some below in the background links. Much of what Kevin Randle claims, according to the document I was sent, is unpublished and therefore evidentially worthless. As for Larry copying his story from Bustinza, that is not the case at all, even if the interview with Linda Moulton Howe actually happened. There are distinct differences between the accounts of the two airmen, especially when it comes to the debriefing. I think the two stories sound like separate accounts of two witnesses who experienced the same incident. The differences in how they were treated afterwards might be because of their difference in rank, see here for more details: https://hpanwo-voice.blogspot.com/2018/07/ben-emlyn-jones-on-ghostly-hour-podcast.html. We also recently have new testimony from Steve Longero that disputes the theory that Larry stole Bustinza's story, see: https://hpanwo-tv.blogspot.com/2018/09/ufo-disclosure-2018-history-has-been.html. As for Peter Robbins defecting to the trolls, I cover that sordid issue here: http://hpanwo-radio.blogspot.com/2019/06/programme-326-podcast-what-else-really.html. Kevin Randle may be unaware of the whole history of this affair and how the entire fabricated morass can be traced back to just one person, Sacha Christie. I'm quite happy to discuss this with anybody who wants to ask, including Kevin. The upcoming film Capel Green will provide many more groundbreaking truths, see: https://hpanwo-voice.blogspot.com/2018/09/capel-green-update.html. I don't know if the documents sent to me are genuine. They could be forgeries, like so many others floating around. Kevin Randle may never have said what he did. However, if they are real then I hope the authors and distributors of them will think twice in future before repeating what is said in them before they've heard the other side of the story.
See here for background: http://hpanwo-voice.blogspot.com/2016/12/is-larry-warren-fraud.html.
And: http://hpanwo-voice.blogspot.com/2017/09/the-larry-warren-controversy-part-22.html.
And: https://hpanwo-tv.blogspot.com/2017/05/larry-warren-in-rendlesham-forest-2017.html.
And: http://hpanwo-tv.blogspot.com/2016/06/scottish-ufo-and-paranormal-conference.html.
Posted by Ben Emlyn-Jones at 18:36

I think I speak for everyone Ben when I ask, "When is Capel Green due to be released and in what theatres will it screened?" Danke schön!

Laurence. I know there have been multiple delays. This is not uncommon in the film industry. We've been waiting years for the Avatar sequel! CG has been expanded and adapted during the course of its production. An honest answer is: I don't know. However I spent last weekend with the production team and assure you progress is being made. I also got some sneak previews of some of the scenes and I know it will be worth waiting for.

Good to hear Ben. Really looking forward to this one.