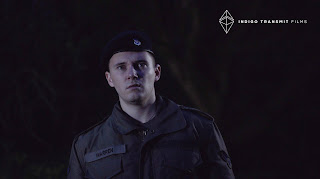 See here for essential background: https://hpanwo-voice.blogspot.com/2017/12/the-larry-warren-controversy-part-28.html.
And: http://hpanwo-radio.blogspot.com/2018/08/programme-296-podcast-gary-heseltine.html.
I'm pleased to say that production on the groundbreaking new UFO documentary Capel Green is making excellent progress. Some of the ficitonalization scenes have now been completed and there are some photographs of Larry Warren on location with his alter ego in the film, the actor playing him. Larry appears to be instructing his younger self on how to handle his service rifle. The uniforms and props are very well constructed. There is excellent costume design in this film; see images below. 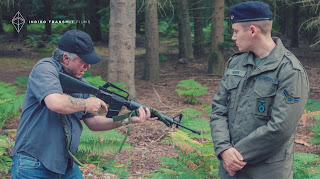 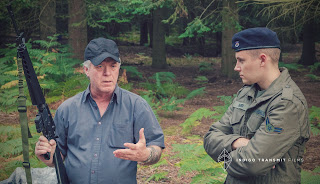 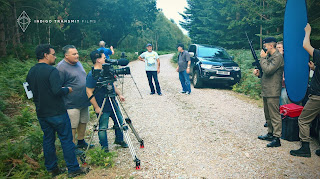 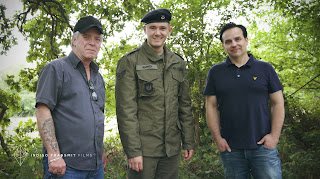 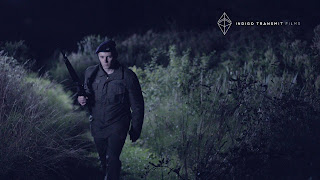 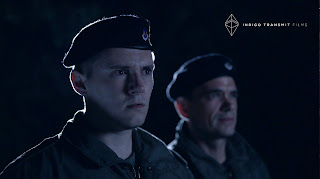 Capel Green has also been featured on the videocast of LA Marzulli, an author, lecturer and filmmaker; author of eight books, see: https://www.youtube.com/watch?v=5xaRXPQGZM8. The film's social media presence has been updated with a new Facebook page, see: https://www.facebook.com/IndigoTransmitFilms/?hc_ref=ARQ4frwQUCe80PxxYjCiAEqvzNQMJDj50nl2mK7II459UHhnc-mDAFkUfcOa4GCZChY&fref=nf&__xts__[0]=68.ARA3Y1cQGEI8FZme-0uyC2mHhA2mH8q9TI7TE_K1M2EfWJI3mec-jc_xLqGEgGfTjZibcNUBv5sJ08Uiy0AMwyTRSLA0Ce1q_4hyM09H2cYfAgvztuikZKGF431q1ApIrZnAyxKBgwtc2_xdLzJZP3H5xA-duDAjbKs88fMv7hxxu7TfL1do_G0&__tn__=kCH-R and also a new Twitter account: https://twitter.com/CapelGreen. I'm especially happy about this because the official Vimeo channel was cruelly removed. The precognitive bad reviews are still coming in, but they will not hamper the success of the film when it is released. I know that the original release date has come and gone, but that is a regular problem in the movie industry; we're still waiting for the Avatar sequel years after it was announced. Don't forget to watch the new extended trailer: https://www.youtube.com/watch?v=-q2kYGro4DI. Another project parallel to the documentary is Larry's new autobiography which has the working title Incoming Missile. I've had the privilege of previewing some of the draft. This book will replace the now defunct Left at East Gate; in my view it is a far better volume. It also includes the story of Larry's life after he wrote his first book, including the recent internet attacks on him which he effectively and comprehensively discredits. In fact the book is not so much a missile as a torpedo, one that will sink SS Troll to the bottom of the sea forever. I very much look forward to the release of Capel Green. It is coming to a screen near you, both big and small, very soon!
See here for additional background: https://hpanwo-voice.blogspot.com/2018/05/peter-robbins-on-podcast-ufo-may-2018.html.
And: https://hpanwo-voice.blogspot.com/2018/01/gary-heseltine-on-reclaiming-perceptions.html.
And: https://hpanwo-voice.blogspot.com/2018/01/capel-green-review-by-col-charles-halt.html.
And: https://hpanwo-voice.blogspot.com/2018/03/your-last-chance.html.
And: https://hpanwo-voice.blogspot.com/2018/02/ian-ridpath-at-fortean-london.html.
Posted by Ben Emlyn-Jones at 19:18

I look forward to this but it made me think. When you have finished your Roswell Trilogy which has been a success what will you write about next? Maybe a Rendlesham trilogy:

If you need a hand with plot and character development don't hesitate to ask as I have a degree in creative writing.