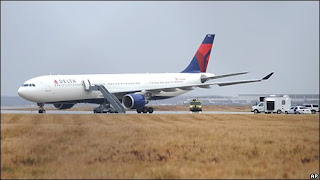 Ain't that just typical!? After Christmas Day's alleged bomb attack on a plane near Detroit there are calls for increased ssecurity at airports across the world. This includes "electronic strip searching" and even brain scans! See: http://whatreallyhappened.com/WRHARTICLES/ICTS.html .
Was it even Abdullah Mohammed Whatshisname Evil al Turban at all? See:
http://pennyforyourthoughts2.blogspot.com/2009/12/tale-of-two-terrorists.html
The Porton Down plastic surgeons have had a field day here!

I've also heard that the "bomb" on the plane might not have been a bomb at all, just a battery that blew up in the low air pressure of the cabin. Also the "Bomber's" treacher was interviewed on BBC News the other day and said that he never thought that this bloke was capable of doing what he did.
Posted by Ben Emlyn-Jones at 12:07 1 comment: 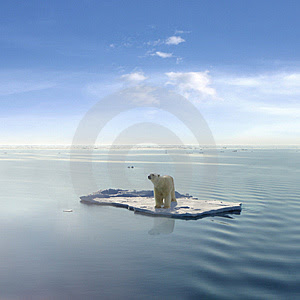 This picture is extremely misleading, and it’s meant to be. It shows what you think is a poor polar bear about to drown as the last of the carbon-emission melted ice vanishes beneath him. It’s bullshit! Polar bear are excellent swimmers and can traverse hundreds of miles of ocean.

And the current Climate Change Summit in Denmark: http://news.bbc.co.uk/1/hi/sci/tech/8413267.stm

The latest events in the promotion of the man-made climate change lie are beginning to sou8nd like a script for that wonderful sitcom, Fawlty Towers!

“Nobody mention Climategate!
I mentioned it once but I think I got away with it!”