Oxford City Council are “redeveloping” the Headington district of Oxford and part of the programme is to fill in the subway that runs under the London Road. This is very unpopular with residents, particularly the elderly and disabled, or those with kids of buggy age because crossing the busy road will be much more difficult, inconvenient and, of course, dangerous. ( http://www.thisisoxfordshire.co.uk/search/display.var.1443190.0.subway_could_be_filled_in.php )

But there’s another reason to oppose the loss of the subway: A number of years ago some beautiful murals were painted on the walls, depicting scenes that counterpoint the culture and environment of daily life in Headington. These pictures are very stylish, warm and humourous. Some of them have a very sophisticated surrealism to them. I decided to take some photos of the murals to preserve them in case the council goes ahead with its “hare-brained” scheme to demolish the subway. It’s fairly typical of this world in that gimmicky economic false-progress takes precedence over everything, even… no especially… deep and meaningful human creativity. They'd much rather we just stared at blank concrete; God forbid that we should enjoy soul-enrichment and inspiration!

Here are some highlights of the mural. As you can see, I’m no Koo Stark and I only have a cheap fun camera, but I’ve written to the Oxford Mail to ask if they’ll send a proper photographer to the subway to record the mural properly… before it’s too late: 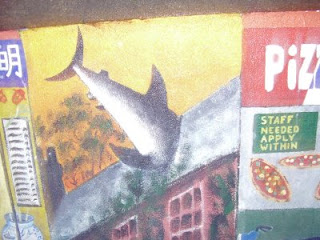 This is a depiction of the famous rooftop shark sculpture by the local businessman Bill Heine; it is on the roof of his house on nearby New High Street. 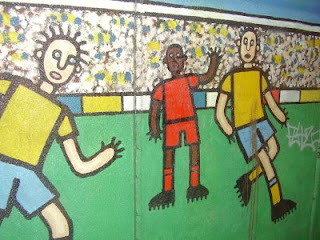 This picture has a very original surrealist style to it. It depicts a football match at Oxford United's nearby Manor Ground. The Manor has gone now and the "U's" have moved to the new Kassam Stadium, but their presence is still a part of Headington's history. 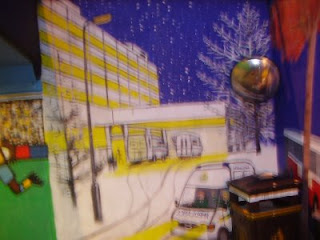 This is a picture of my hospital, the John Radcliffe. 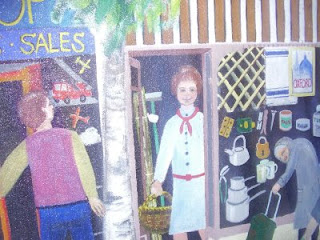 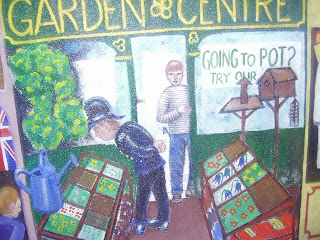 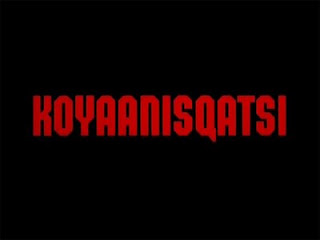 This is an odd film and some might wonder whether it’s a bit pointless. It has no dialogue or storyline at all. It is simply a series of images accompanied by music whose meaning the producers insist on leaving open to interpretation. But I find it very powerful, haunting and absorbing. When I watch Koyaanisqatsi I get the distinct feeling that there's a very important message in it that it's telling me, but I can't put it into words. A clue to its theme is in the title: Koyaanisqatsi means "life out of balance" in the Hopi Red Indian language. Many Native American philosophers believe that the White Man is suffering from a deprivation or sickness. This is caused by our straying away from the spiritual world and being fixated on materialism, consumerism and the physical world. This is apparent in the words of Chief Seattle, whom I’ve written about before: http://hpanwo.blogspot.com/2007/11/chief-seattles-letter.html .
My favourite bit is the sequence that just shows the people standing still looking at the camera: the lady at the railway station, the fighter pilot, the Las Vegas casino women. It is at this part I get the strongest feeling of significance. Their expressions are as subtly impressive as the Mona Lisa’s; I bet the director spent ages making them pull just the right faces!

There are some much more recent sequels by the same production team: Powaaqqatsi and Naqoyqatsi. I'll have to watch those when I have time. I’ll also buy the full-quality DVD’s rather than the diminished online versions.

There used to be a Channel 4 show many years ago called Art of Landscape that was very like Koyaanisqatsi. Does anyone remember it?

Look at this Madonna video: http://uk.youtube.com/watch?v=QFzeDExYPbw . It's a great song and video and its high-speed time-lapse shots were definitely inspired by Koyaanisqatsi.

Here is a documentary about the film including interviews with the production team: http://video.google.com/videoplay?docid=-6035911215317334768&hl=en

(I’ve added two new HPANWO Voice articles today so don’t forget to scroll down to the other one below!)
Posted by Ben Emlyn-Jones at 18:33 No comments: 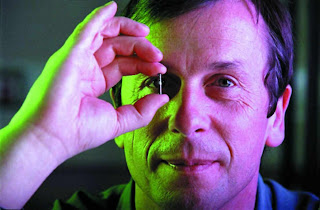 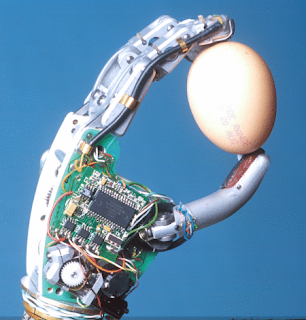 Kevin Warwick was interviewed on Red Ice Creations Radio a few weeks ago and he seems very naïve about how Artificial Intelligence and psychotronics could be abused by authorities. You can download the interview here, but need to subscribe to hear both parts: http://www.redicecreations.com/radio/2008/06jun/RICR-080629.php . I’ve written my own article on this subject here: http://hpanwo.blogspot.com/2008/06/ai-and-new-human.html .

I'm reading an interesting series of novels at the moment by an American author called Michael DiMercurio ( http://www.ussdevilfish.com/index01.htm ). He used to serve in US Navy submarines and now he writes novels on the subject. In his more recent books he addresses the concept of artificial intelligence used in the military. He invents an unmanned submarine called “SNARC”, which has a genetically engineered artificial biological brain running it. It is euphemistically termed a “carbon computer” while ordinary computers are called “silicon computers” to distinguish them. This brain has thoughts and feelings like any human and part of the plot is that the scientist who created it, and who helps some gangsters hijack the robot submarine, doesn't want the sub to come to any harm because he's begun to see the artificial brain as a friend. This raises an interesting question: If you could create artificial intelligence and therefore machines with thoughts and feelings just like living creatures, then you'd no longer be able to treat them as machines, as you would a car or Hoover or toaster. You'd have to consider their feelings! There would be a whole new discipline of law, robot ethics! These machines would need legal rights like animals do under today's law. Isaac Asimov addresses this question in his Robot novels. One of them was made into a film, Bicentennial Man starring Robin Williams as a robot who is unintentionally created with Artificial Intelligence, and although his mind is not entirely the same as a human one, he is undeniably conscious and self-aware. The film follows his poignant struggle to be accepted for what he is in human society ( http://www.imdb.com/title/tt0182789/ )
As Kevin points out in his Red Ice interview, AI would raise many philosophical questions about the nature of mind and consciousness itself. For example: would AI machines have a soul? Seeing as we are their creators does that make humans into God? Would they continue to exist after they were shut down, ie "killed"? Is there an AI afterlife? This process of "learning" is exactly what happens with the artificial brains in the Michael DiMercurio books. Although those books are set a decade or two in the future and the artificial brains are very sophisticated, matching human brains. The programmer can even talk to the AI brain and have a conversation with it as a real, conscious entity! Alan Turing would be jumping up and down with delight! Imagine that! If you ever get lonely and need a friend you can grow one in a laboratory! In the book a Russian gangster, Alexei Novskoyy, takes over the robot submarine and commands it to fire its torpedoes at an American submarine and the AI brain reacts as a human would. "Why?" it asks. "SNARC is an American submarine too"! Novskoyy then has to reason with the machine in the same way he would a real person. He has to persuade the brain that the submarine target has suffered a mutiny and been hijacked. The machine, despite its intellect, has a child-like naivety and believes him.
Posted by Ben Emlyn-Jones at 16:33 No comments: 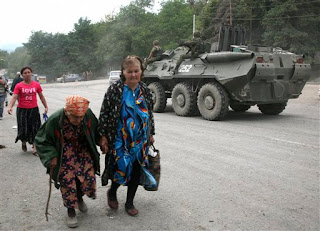 Every new news story on this conflict contains more and more horror. As usual, it's the innocent bystanders who suffer the most. The nations' leaders have bodyguards and bunkers while the soldiers themselves wear flak-jackets, sit in armoured vehicles and carry weapons to defend themselves. The innocent civilians (and Hospital Porters) are helpless and at the mercy of the armed cowards who can kill and assault with impunity.And now it turns out America is involved. The City of London America Company, usually wrongly called the United States, always seems to have its finger in the pie whenever genocides take place, dating all the way back to Hitler and Auschwitz. I'm not surprised to find that the theatre of conflict is an important strategic one, also the home of oil pipelines. It’s so sickeningly predictable!

My thoughts and prayers go out to all the people whose lives have been affected by this war. Hopefully it will end soon.
Posted by Ben Emlyn-Jones at 09:33 No comments: 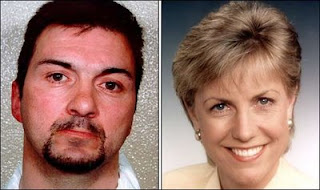 I always knew that he'd eventally be released.
See here: http://uk.youtube.com/watch?v=tGW2OGFDUZg
This man was the classic "patsy". Jill Dando was killed by a Serbian secret agent in revenge for the NATO bombing of the TV station in Belgrade, an atrocity which a few days earlier left 17 people dead, including a famous female TV personality, the Serbian equivalent of Jill Dando. But Blair didn't want to make an issue of it because he was under orders to get the newly-independant states former Yugoslavia into the EU, so this cover story was concocted and Barry George was the fall guy.
Posted by Ben Emlyn-Jones at 16:01 No comments: 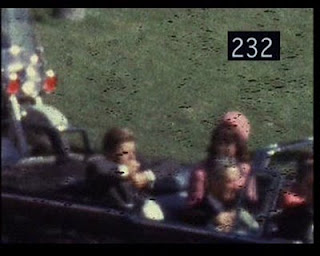 http://www.brasschecktv.com/page/385.html
In today’s movies with digital special effects and computer generated imagery we often assume that most of these effects were not possible before this technology was invented. This is not the case. Similar effects were used in the pre-digital age using different methods; indeed, the early Star Wars movies were so created.

So what about the Zapruder film? Here we see compelling evidence that it has been tampered with. So this, the most notorious and shocking amateur film in history, is not a true and accurate representation of what happened. So who faked it? The Warren Commission? J Edgar Hoover? The KGB? Maybe one day we’ll find out.

Posted by Ben Emlyn-Jones at 09:29 No comments: