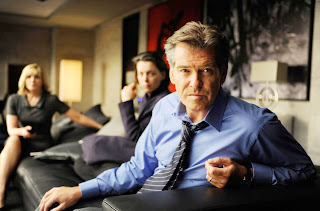 I've just come back from the flicks; I've seen Roman Polanski's The Ghost. It's dynamite! A less than evasive parody of Tony Blair; you've got to see it to understand! In fact it's made me wonder about the current shaming of the director; not that the charges against him are fabricated, but whether his humiliation is a bit... conveniently timed? According to the review of the film in "The Big Issue" Polanski was already in jail during the movie's post-production and he edited it from a laptop in his cell.

The film's apparent title is The Ghost Writer, although the pre-release reviews, posters call it The Ghost, the same title as the novel it is based on. This latter title is the one advertized on Vue Cinema's listing too. I wonder why that is?

The author of the book on which the movie is based, Robert Harris, was actually a friend of Blair, according to The Big Issue review. He said Blair used to be a really nice guy, but then he became Prime Minister and he changed. He transformed into this horrid, ruthless tyrant. This has happened to other men. David Blunkett led an anti-government rebellion in 1983 in Sheffield, but look at him during the Blair years! The most Orwellian Home Secretary in living memory. Nikolai Ceaucescu, the last Communist leader of Romania was once asked how he dealt with dissidents. He replied: "I don't fight then, I just offer them a job!"

Maybe something happens to these people on a spiritual level when they get into government; an essential part of their humanity is stripped away from their minds. Maybe that's what the Satanic Ritual is all about.
Posted by Ben Emlyn-Jones at 19:16 2 comments: 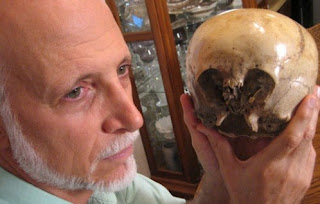 I saw Lloyd Pye live last year and got to handle a facsimilie of the Starchild Skull. This controversial object's mystery might soon be solved. I doubt if Lloyd would have broadcast it this blatently unless he was pretty confident that his hypothesis was about to be proved.
Posted by Ben Emlyn-Jones at 10:02 No comments:

Nutrition- No Defence Against Cancer? 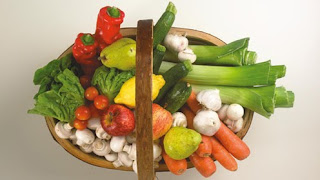 It's been in the news today that a study done on the continent claims that eating fresh fruit and vegetables only reduced your cancer risk by a negligible 4%. See: http://news.bbc.co.uk/1/hi/health/8605270.stm

I think we should be suspicious of this claim when you consider the promotion of the new Codex Alimentarius laws. There have been attacks on nutrician from Ben Goldacre etc. Don't just take this announcement as Gospel! They have a motive for fraud. They're hopeing people will give up on healthy eating and get more cancer so Illuminati-occupied Big Pharma gets more money and power.
Posted by Ben Emlyn-Jones at 12:17 No comments:

Eugene Terre'Blanche was the leader of the Afrikaanse Weerdstandsbeweging, (Afrikaaner Rebel Campaign) the AWB in South Africa, a political party and guerilla movement that opposed the end of the Apartheid policy in the early 1990's. In the tumultuous years when this happened members of the AWB killed hundreds in terrorist attacks. Terre'Blanche was born in 1941 and became a policeman and bodyguard to the president and inventer of Apartheid Hendrik Verwoet. After forming the AWB in 1973 he campaigned for the rights of white South Africans and demanded a "white Homeland" after the Apartheid-supporting government collapsed and Nelson Mandela was released from jail. He was killed on Saturday after a dispute with one of his employees; two men have been arrested and, according to thee media, this doesn't appear to be a political assassination.

The problem with Africa, especially in South Africa, is that since the time of Cecil Rhodes race has been used to Divide-and-Rule the continent. Rhodes, who has an occultish mausoleum built in Oxford, used to engineer wars between different tribes and offer both of them protection by coming under the rule of Queen Victoria. His protege Lord Kitchener, famous for his appeareance in recruiting posters in the Great War, set up the first internment centres for rebel Boers and the term "concentration camp" was born. In truth Divide-and-Rule is still used in South Africa and the AWB are playing an assigned role in the scam, just like the BNP do in Britain. In truth Rhodes' network still rules South Africa, now as it did during Apartheid. The diamond companies like De Beers and other corporations run the nation for their Illuminati rulers in London. Terre'Blanche sadly went to his grave without realizing how he was being fooled and expoited.
Posted by Ben Emlyn-Jones at 15:31 No comments: 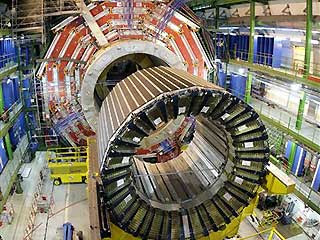 Background article: http://hpanwo.blogspot.com/2008/03/large-hadron-collider.html
These cheering, whooping scientists are celebrating that the Large Hadron Collider has achieved particle collisions over 3 1/2 times greater than any collider before. But the LHC is only at half-power! During the next few years it will be accellerated up to its full power that will produce collisons twice as powerful as today. What will happen then?
Posted by Ben Emlyn-Jones at 00:04 No comments: