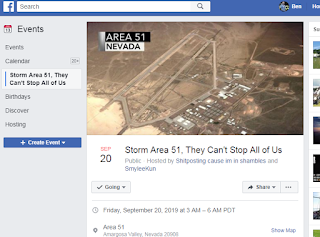 An internet meme has been circulating over the last few days called "storm Area 51- they can't stop all of us" or #StormArea51. So far over half a million people have signed up. The highly secretive military base in Nevada USA is used for the government's most highly classified aviation projects. Until the mid-1990's the authorities would not even acknowledge its existence. The CIA's spy planes were developed there and it is also a repository for foreign technology so that the government can study it in private. Some of the technology is reputed to be very foreign indeed; debris from flying saucer crashes. There is no proof that salvaged UFO wrecks are kept there, but it is the kind of place that the government would keep such artefacts, should they be found. It's not the only one of such theorized locations, but it is the most famous. Occasionally trespassers attempt to breach the boundaries of the base, but they are always quickly arrested by the security guards, known as "cammodudes". These men are armed and authorized to use deadly force, so I do not recommend any such incursions. However, the meme creators hope to amass so many people that they will overwhelm the perimeter defence forces by sheer weight of numbers. The hope is they can then break into the base and "see them aliens". Source: https://www.independent.co.uk/news/world/americas/storm-area-51-aliens-sighting-roswell-break-in-military-nevada-sign-up-a9003261.html.

I have signed up for it because I love the idea. It resembles a scene in my trilogy books, see: http://hpanwo-bb.blogspot.com/2018/12/roswell-redeemed-is-here.html, although I don't know whether the organizer of the event has read the books. Storm Area 51 is however just an appealing notion. It has no chance of success. Even if all six hundred thousand people turn up, their plan is simply to run towards the base very quickly. They have also told everybody in advance what they plan to do and when they plan to do it... including Area 51 security. There is nothing said in the arrangements about weapons and I assume they would prefer people involved to carry out the invasion unarmed. This is futile because the base is protected by very heavy military hardware including the aforementioned cammodudes, helicopter gunships and fighter jets. Only an organized team with similar firepower could succeed in capturing the base. Also it would have to be plotted in secret so as not to alert the security forces and therefore catch them unawares. I am not opposed to such subversive violent action in principle. Considering the abusive actions of the government against the people of the world for so long it could be classified as the lawful use of force; indeed this is how I portray it in the novels. In fact according to an elderly ex-CIA witness, President Dwight Eisenhower wanted to do exactly that, see: https://www.youtube.com/watch?v=6lBbEPIAG8k. You might argue that it makes no sense that an American president would choose to invade an American base, but it's not. There is a revealing comment made by the lawyer who represented Robert Frost and his colleagues, a class action lawsuit by some men who had served at Area 51 and become ill as a result: "I don't know (if there are aliens at Area 51). My clients never saw any; but it wouldn't surprise me. You must realize that place is a legal black hole. It operates above Congressional oversight, above executive oversight; hell, even the President himself cannot enter it without permission. One is forced to consider whether it is even part of the at all, and might instead be an enclave of some kind of 'super-government'." (My emphasis). These are astounding words, but they are potentially accurate. It is possible to travel close to Area 51 by driving up to its boundary on the . There are even tourist buses that go there these days. Seeing as we don't currently have the means to force our way into the base, the best thing to do is use information to make more and more people aware of the base and government secrecy in general. The late great Anthony J Hilder used to hold peaceful protests by the warning signs at . These were filmed and did a lot of good in alerting the public, see: https://hpanwo-voice.blogspot.com/2019/04/anthony-j-hilder-dies.html and: https://archive.org/details/JohnLearOnUfoArea51AnthonyJHilder.
See here for background: https://hpanwo-tv.blogspot.com/2018/12/bob-lazar-movie-livestream.html.
And: https://hpanwo.blogspot.com/2015/01/area-51-alien-interview-new-research.html.
And: https://hpanwo-voice.blogspot.com/2015/10/the-sheahans-of-area-51.html.
And: https://hpanwo-voice.blogspot.com/2013/08/area-51-revealed.html.
And: https://hpanwo-voice.blogspot.com/2015/07/area-51-extension.html.
Posted by Ben Emlyn-Jones at 16:35

Thanks for sharing a comprehensive review post, your site having informative & valuable content. I appreciated your efforts.