The Sheahans of Area 51 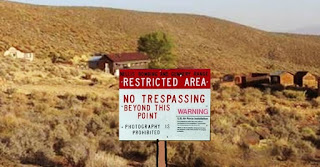 I have written about Area 51 many times. My previous thoughts about that secret military base in Nevada USA can be found in the background links at the bottom of this article. The base began as a testing ground for covert reconnaissance aircraft in 1955 and possibly for other classified projects as well; but before then the area around , a salt flat created when an ancient lake dried up, was the site of many mines, especially silver, an industry for which is world famous. Lead was also discovered there in the 19th century and in 1864 several companies bought development rights to the land, including Groom Lead Mines Ltd which gave its name to the dry lake bed. The mining business declined through the early 20th century and by the time the federal government acquired the land in order to build the secret experimental facility there were very few working pits. However there is one mine still there that belongs to the Sheahan family and has done since the 1870's. Even though the mine is no longer operational, the family still own the four hundred acres of land surrounding the mine and their homes and they all live there. Their land is completely surrounded by the Area 51 compound leaving the family on what they describe as an "island". There is a single access road leading to the 375 "Extraterrestrial" Highway near Rachel, but the government set up an illegal checkpoint on the road; they have searched and questioned family members as they come and go from their homes. Family members say the security guards, civilian contractor operatives known as "cammodudes", have pointed weapons at them and threatened them. Trouble for the Sheahans began when the first phase of construction began on the base in 1954. The mine had to be closed because the industrial plant there suffered an explosion. The family believes that the building was aerially bombed by the US Air Force. There have also been times when their home and land have been strafed by cannon fire from USAF aircraft. They have kept a collection of shell casings and discarded rounds as evidence. The mine has not reopened since then. The family have tried to get it working again, but prospective business partners and clients have been driven away by the authorities. They've been warned not to do business with the Sheahan mine because it will go bust and they'll lose all their money. The grandparents of the current owners went to court over the matter as long ago as the late 1950's but they came up against a brick wall of silence, like the Frost lawsuit did, and eventually ran out of money. The current managers of the mine, Joe Sheahan and Barbara Sheahan-Manning understand the need for high security at the base; they support the cause of their country's military research and commented: "We’re not saying that what they’re doing out there (at Area 51) is unimportant and doesn’t need to be protected; we get it. We’ve been alongside these people since 1955... The truth is you can get more of a view of what’s going on at that base through Google Earth and pictures that are out there all over the Internet." Source: http://yournewswire.com/video-family-that-owns-property-overlooking-area-51-speak-out/. 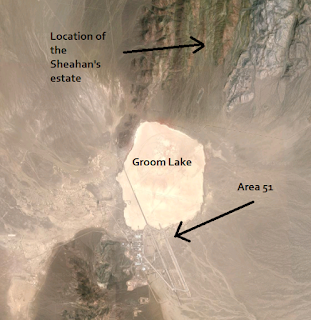 This is true. As you can see above, although the mine lies only about ten miles from the base, north of itself, it is situated in a steep valley. The view of the base would not be much better there than the one you can see perfectly legally from Tikaboo Peak on public land. The authorities have also put pressure on the family through the law. They are threatening to seize the land on the grounds of national security. They've offered to pay 5.2 million dollars US in compensation, but this is a paltry insult for what the mine is truly worth, including the remaining minerals that have never been extracted thanks to government sabotage. What's more the family feels passionate about their family's history and are proud of their great-great grandparents' legacy. They've bravely declined the deal. The Sheahans hope that by going public they will be able to gain support from the media, civil rights groups and their representatives. I wish them all the best and I'll help them any way I can. What we see here is a sadly common situation. Nation states which call themselves "free" think nothing of ordinary citizens and trample over them with unabashed contempt when they feel the need to, or even the will to. There was a similar situation in 1994 when a class action lawsuit against the federal government was initiated by the widow of a man named Robert Frost and a number of his colleagues. These men had all worked for a defence contractor and had all been stationed at Area 51 for a few years. While serving on the base the men had fallen ill with skin irritation, breathing problems and eventually liver failure; all the men died soon afterwards. It turns out that they had been handling toxic chemicals while working at the base, but because of government secrecy regulations, which all the men had agreed to, the lawsuit failed. Like the Rendlesham Forest UFO witness John Burroughs, they couldn't even access all their medical records and the authorities refused to state what chemicals the men had been exposed to. The judge ruled to disallow the disclosure of classified documents or table the testimony of other witnesses because this would allegedly "expose classified information and threaten national security." Anybody who takes a job on Area 51 signs away their constitutional rights and risks their life. I would advise against it, no matter how much you get paid for it. This is what we, the people are up against. A state institution that will violate and kill us without a second thought. It is up to us to resist by supporting people like the Sheahan family and Robert Frost. It might not be in our backyard today, but it will be one day if we don't stop it. Who will stick up for us then?
See here for background: http://hpanwo-voice.blogspot.co.uk/2015/07/area-51-extension.html.
And: http://hpanwo.blogspot.co.uk/2015/01/area-51-alien-interview-new-research.html.
And: http://hpanwo-voice.blogspot.co.uk/2013/08/area-51-revealed.html.
And: http://hpanwo-voice.blogspot.co.uk/2014/05/bob-lazar-25-years-on.html.
And: http://hpanwo-voice.blogspot.co.uk/2009/04/area-51-disclosed.html.
Posted by Ben Emlyn-Jones at 16:25

PAK SUKIMAN POULUS said...
This comment has been removed by a blog administrator.
1 November 2015 at 12:41