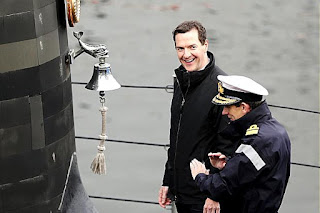 For a while now, two political forces have been merging in , that of 's nuclear weapons programme and the Scottish nationalist cause. All of the 's nuclear arsenal is currently stationed in at HMNB Clyde, the Royal Navy's Faslane base on the Firth of Clyde. The ruling Scottish Nationalist Party are intractably opposed to this, as are most of the Scottish public, seeing themselves as a "human shield" for any enemy nuclear attack on Great Britain. They have already come close to their goal of an independent Scotland in the recent referendum, see: http://hpanwo-radio.blogspot.co.uk/2014/09/programme-104-podcast-scottish.html, and it is likely there will be another devolution vote in the next few years which could easily go YES, especially since the SNP gained a virtual political monopoly north of the border at the last general election, see: http://hpanwo-voice.blogspot.co.uk/2015/05/general-election-result.html. At the same time the government is very keen to renew the Trident nuclear weapons system based at Faslane. This is very controversial. A submarine-launched ballistic missile nuclear deterrent system is extremely expensive and many people think it's an extravagance when at the same time so many old people live in poverty and NHS nurses are underpaid etc, and the government claim it has no money for them so they have to live under "Austerity". If goes independent then Trident will have to move from HMNB Clyde to a new facility in or which will increase the cost of replacement by a large proportion, and add to the dispute. And where will it move to? Your backyard? Scottish independence will basically make replacing Trident politically out of the question, see: http://hpanwo-voice.blogspot.co.uk/2013/07/replacing-trident.html.

So why then has the chancellor George Osborne just announced a major refurbishment of the Faslane facilities? He is going to allocate half a billion pounds to constructing new jetties, a bigger dry dock and replacing the dockyard's sea wall. The work is due to begin in 2017. He says it's an "investment" that is all about "keeping safe" in a "dangerous world". The country's Vanguard class ballistic missile submarines supposedly represent a huge "insurance policy" against any hostile foreign action. This will create over two thousand jobs, both naval and civilian, and upgrade the Royal Navy within the NATO ranking. Osborne has been attacked by Nicola Sturgeon, the Scottish first minister and leader of the SNP. She has called his plan "arrogant" because he has "pre-empted" Parliament's decision on the replacement of Trident. Ms Sturgeon has plans for Faslane as a non-nuclear naval base serving an independent Scottish navy. She criticized Osborne for his hypocrisy; as I said above, wants to flush billions of pounds away on a useless nuclear deterrent while pensioners are starving. She also brings up the irony that the government has initiated huge defence cuts during the period that it has been propping up Trident. There are not even any maritime patrol aircraft in the 's inventory and we have to rely on NATO allies for that role. Source: http://www.bbc.co.uk/news/uk-scotland-scotland-politics-34101989. I don't think Ms Sturgeon said everything she was thinking in her brief BBC sound-bite interview. What the government is actually doing is extremely devious. Osborne is hoping that the 's new financial commitment to the Faslane infrastructure will place both moral and practical obstacles in the way of those in opposition to Trident renewal; also for those in favour of Scottish independence. As I said above, the two issues are intertwined. If the upgrades to Faslane are in progress, or complete, by the time a second independence referendum is announced it will be a useful card to play. It's a bit like living in a house with another person. You want to move out, but your housemate doesn't. So while you head off to the estate agents he calls in some builders to put a new extension on the back, paying them a lot of your money to do so, in order to try and put you off moving. George Osborne is a cunning and ruthless politician; no wonder he's done so well in Cameron's cabinet.
See here for more details: http://hpanwo-voice.blogspot.co.uk/2014/08/salmond-vs-darling-part-2.html.
And: http://hpanwo-voice.blogspot.co.uk/2015/05/trident-submariner-speaks-out.html.
Posted by Ben Emlyn-Jones at 18:16

Astute post Ben, well observed. You are corrects, but, as for the Scottish National Party that I have little sympathy for them. They also use the same kind of tactic as what the British are using to bolster an ulterior motive and the SNP's is to seemingly appear to resist 'English' political plutocracy and non-independance, but adopts every single plutocratic agenda that the very same government they claim to be against and actually have implemented the same Cuts to the Health Service, Most Vulnerable in Scottish society including the elderly. In terms of Scotland being a human sheild may be true Ben but what is going on behind the sheild is equally as destructive. Two Maingy Dogs fighting over a bone Ben, hypocrites one and all.

P.S IT SEEMS YOUR HPANWO VOICE SITE IS BEING AGGRESSIVELY TARGETED BY DUBIOUS SPAM MESSAGES MY FRIEND (I SUSPECT IT IS DELIBERATE) Have you tried translation of the text?

Just translated. It appears to be a request for money to 'help a family'. I'ts funny sometimes to check spam emails. Ive had everything from Eastern European 'girls' who think I'm cute from my facebook profile (even though I do not have a profile) to the FBI claiming I am wanted for various violations that can be solved by sending a cheque. Better than the internet mate. In all seriousness, somebody appears to be targeting your site.

Thanks, X. I don't know who this spammer is, or are. They post from many different accounts.