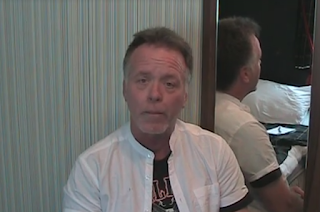 I first met Larry Warren in 2008 when he was a speaker at the Now That's Weird conference, see: http://hpanwo.blogspot.co.uk/2008/06/now-thats-weird-conference-2008.html. My tent got waterlogged so he offered to rent a collapsible cot and let me sleep on the floor of his hotel room. This offer was doubly touching because at the time he had heard about my legendary ability to snore. I've always got on well with Larry. He is a flawed hero however, and he's always the first to admit it. Due to trauma he has suffered, he has issues to do with his mental health and his ability to relate to other people. Sometimes he is his own worst enemy; and he has already had a big lecture about that from somebody else, so there's no need for me to go into details. However, who doesn't have some damaged goods on their shelves? In this last year a massive storm of controversy has blown up around Larry Warren that is rapidly becoming one of the biggest Truth mobs I've ever seen (See the background links below for other examples). This campaign against Larry is highly organized and dedicated to the point of fanaticism. It is led by a former friend of his that I'll call "Wilks". Wilks is the same person who recently attacked me by bringing up my discharge from hospital portering, see: http://hpanwo-voice.blogspot.co.uk/2016/07/is-ben-emlyn-jones-happy-slapper.html. Since its initial launch in the aftermath of the Scottish UFO and Paranormal Conference the troubles simmered down on the surface, yet they have recently erupted anew following Larry's rejection by the last person I would have expected, Peter Robbins. Peter left a short message on his Facebook page, as composed as he always is, explaining that he was breaking contact with his co-author of Left at East Gate. Since then Wilks has published more material that they claim is evidence of Larry's misdeeds, most notably that he traded counterfeit photographs and artwork. Larry denies this and has responded to these accusations on HPANWO Radio, see: http://hpanwo-radio.blogspot.co.uk/2016/07/programme-197-podcast-larry-warren.html. It is remarkable and significant that Peter has joined the ranks of those distancing themselves from Larry. I like and respect Peter a lot too and I don't wish to judge him. Right now I'm just very sad that one of the closest, most long term and productive partnerships in UFOlogy has come to an end. Peter's action and Wilks' publication has led to more people doing the same this week, including several people I otherwise admire a lot.

I've had several messages from people asking me where I stand. One said: "Get off the fence! You've been presented with evidence that you have ignored..." This is uncanny because it matches almost to the letter a statement that was posted to me... or should I say posted at me... a few years ago on the anti-Darren Perks drug-den that used to be the original exopolitics Facebook group. In fact I've been presented with no evidence against Larry Warren at all. The word presented implies a respectful gift of ideas. I have had a package hurled contemptuously into my face supposedly containing evidence. However the package is wrapped in a parcel of lies, threats, insults and moral blackmail. There is only one response I ever give to that kind of correspondence; I return the parcel to sender with a note enclosed depicting a raised middle finger and a strident "fuck you!" Like all other Truth mobs, this one appears to be built not on rational discussion, but on the aggressive and magnetic bombastic power of its leader. Wilks is apparently writing a book about Larry... Well move over, Jenny Randles! UFO's that Never Were is about to lose its pole position as the most pointless UFO book ever written. It's amazing how much work can be done by a Truth mob; if only the people involved would direct that energy into something creative. My own position is simple; I've seen no reason at all to denounce Larry as a fake UFO whistleblower. I understand why he's a difficult man to get along with sometimes; you should have seen the argument we had about 9/11! But a heart of gold beats beneath that volatile exterior. Actually right now I'm far more interested in the prospects of willing Disclosure happening very soon, see: http://hpanwo-tv.blogspot.co.uk/2016/12/ufo-disclosure-2016-what-about-trump.html. Now wouldn't that put things into perspective!?
See here for the next part: http://hpanwo-voice.blogspot.co.uk/2017/01/is-larry-warren-fraud-part-2.html.
See here for background: http://hpanwo-voice.blogspot.co.uk/2016/09/truth-mobbed-again.html.
And: http://hpanwo-radio.blogspot.co.uk/2015/12/programme-167-podcast-shill-special.html.
And: http://hpanwo-tv.blogspot.co.uk/2016/06/the-shill-squad-2-ben-fellows.html.
Posted by Ben Emlyn-Jones at 17:12

I'll make you woo woo all the way home haha

Ben, the U.K. exopolitics group got what was coming to them when they tried to bring me down. Anthony and David and their Canadia friends in Toronto build so many lies against me that it was absolutely ridiculous to a point where everybody just laughed at them. Their poison pen letters failed badly and by all accounts they were shall we say 'hacked' by friends in useful places etc.
It's sad about Peter and Larry and Larry has nothing to hide at all so why they are targeting him is beyond belief....
(Darren Perks- the real one!)

It was a steep learning curve for me, Darren. Being right in the path of a runaway Truth mob taught me a lot. When another one came along I spotted it straight away.

Anybody with half a brain cell can look at these two links and that should answer your question.

By the way, i still have not had a public or private apology from you for breaching my privacy by the untimely disclosure of my private and confidential information and publishing it online for the world to see before i got a chance to. That is the definition of breach of privacy.
I do not forgive easily but an apology would be a good place to start Ben. I tried to look out for you and you went and did what you did. If no apology is forthcoming anytime soon, i strongly recommend you loose any excess weight that you may be carrying, because when i see you , i really do hope for your sake that you are able to run.

And you James Weshare an expert on handwriting are we?
No I didn't think you were either like everyone else. If you don't like Larry Warren then fine just stop biting moaning about him you are making yourself look like a complete idiot.
Thanks
Darren Perks (the real one)

Thanks, Darren. It's a bit too late for him now. Apparently he's writing a book about Larry; one of TWO people who are. Some folk have way too much free time.