Word of the Year- "Post-Truth" 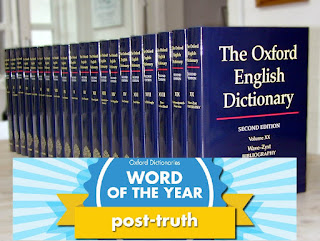 Every year the Oxford English Dictionary publishes a new edition of its established list of English vocabulary with a number of neologisms, emergent words that have just been thought up. Last year these included: "selfie" and "to twerk". (I've predicted that the word "" will one day be added as a common noun, see: http://hpanwo-bb.blogspot.co.uk/2016/11/ben-emlyn-jones-on-bases-talks.html. I've also invented my own word: "to dvark". This is a tone of voice and style of speech sometimes used by hostile skeptics when they debate non-skeptics, especially on the internet, see: http://hpanwo-tv.blogspot.co.uk/2016/07/skeptics-who-are-they-why-are-they.html.) This year's neologisms come mostly from the world's current unusual political landscape: "Brexiteer", "alt-right" and "woke"-as an adjective. Another predictable addition is "coulrophobia"- a fear of clowns, see: http://hpanwo-voice.blogspot.co.uk/2016/09/creep-clowns-return.html. However, the Dictionary always awards one neologism with the title "Word of the Year" and for 2016 it has chosen "post-truth". This word has been used for a long time before being given an official reference; it was probably coined in the early 1990's. It is defined by the OED as: "Relating to or denoting circumstances in which objective facts are less influential in shaping public opinion than appeals to emotion and personal belief." That's not a very good definition. We already have plenty of others terms for that meaning: "propaganda", "rhetoric", "public relations"; or, if I'm in a cynical mood, "politics in general". Based on news stories about this, the definition has been influenced by "Remoaners" and those "butthurt" people dreading the "Trumpocalypse" (Will those three words get a mention next year? I've heard them all and I didn't make them up). It implies that the people of Britain and the United States of America have lost the capacity for reasoned thought and so they do things that are totally against their best interest, like voting to Leave the democratic paradise of the European Union or failing to elect the "First Woman President!" who longs for peace in the Middle East, funds and arms the feminist utopia of Saudi Arabia and has worked so tirelessly to jail her own husband for his sexual predations... My sarcasm will not be lost on you; and it is appropriate because there's no other way to express how misanthropic the lower levels of the authorities and their lackeys have become towards the common people. You can always trust The Guardian to reveal the new left's sordid thought processes, see: https://www.theguardian.com/books/2016/nov/15/post-truth-named-word-of-the-year-by-oxford-dictionaries.

The official definition of "post-truth" also goes against the literal formation of the word. "Post-truth" is a compound word and the prefix "post" indicates a past situation that no longer applies to the present. Other examples are "post-war": a period of time after a war has ended; and "post-mortem": something relating to somebody after they have died. So a more empirical definition of "post-truth" refers to a time when truth used to exist in the past and no longer does. It could be applied to describe the marketing and advertising industry after the revolution caused by Edward L Bernays. He stopped trying to persuade customers that they should buy his product by addressing them with a rational argument; treating them as beings capable of logical decisions. Instead he used psychological trickery to manipulate them into buying his product by appealing to their subconscious urges, see: https://vimeo.com/82688215. This Word of the Year neologism is usually used in conjunction with "politics" usually as "post-truth politics", but has there ever been a time when politics has been "truth"? So therefore can there realistically be a resulting "post" situation? God, I wish so much that George Orwell were still alive. Main source: https://en.oxforddictionaries.com/word-of-the-year/word-of-the-year-2016.
See here for more information: http://hpanwo-voice.blogspot.co.uk/2014/09/was-orwell-mediocre.html.
And: http://hpanwo-tv.blogspot.co.uk/2016/06/brexit-reality.html.
And: http://hpanwo-tv.blogspot.co.uk/2016/11/president-trump.html.
Posted by Ben Emlyn-Jones at 18:12