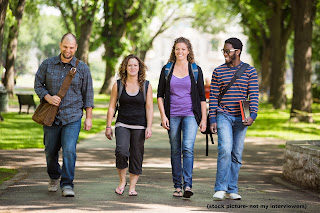 I've been interviewed by a trio of students from a university in south who are working on an article for a magazine. I received a letter from one of them a couple of weeks ago:

"Hi, Ben. I am a third year university student and at the moment a group of us are working on a magazine publication. I was doing some research and came across your website HPANWO, and am very interested to learn more. I want to understand what you do and why you do it. I think you would make a very interesting subject for an article in the magazine."
As you know, I'm very wary of talking to the media, for example see: http://hpanwo-voice.blogspot.co.uk/2012/10/bbc-conspiracy-road-trip-ufos.html. However a university magazine is not a problem. So we made arrangements and I met them today. We were in a busy cafe in a shopping centre, but there was nowhere else we could really go. It was a bit noisy, but we managed to have a good conversation. There were three of them, two women and one man, all fairly young. They were polite and friendly and stressed that they weren't there to argue, just to gather my own statements. The man recorded our conversation and took some photographs of the scene. I gave them copies of my first and third books, Evan's Land and Roswell Rising, see: http://hpanwo-bb.blogspot.co.uk/2016/08/roswell-rising-is-here.html. (The new edition of my second novel Rockall is available free online: http://hpanwo-bb.blogspot.co.uk/2009/02/rockall-chapter-1.html.) They focused on what they saw as my support for Donald Trump in the recent presidential election. However I explained to them that it was not really support in the literal sense. Yes, if I were American I would have voted for Trump, but this is part of a far bigger subject, see: http://hpanwo-voice.blogspot.co.uk/2016/11/conspiracy-theorists-finally-proved.html. We discussed UFO Disclosure, the Bilderberg Group, free energy, Kevin Annett, starseeds, indigo children, and much much more. It only took about three quarters of an hour and it was interesting to talk to them. I wish them well in their studies and look forward to seeing the magazine when it is published in the New Year.
Posted by Ben Emlyn-Jones at 19:11

I'll be interested to see the angle that these students take in publishing their article too Ben.
Are you one of a group of individuals that were interviewed do you know? What was their motivation? Was this part of their coursework or just a magazine article? I am quite surprised that you didn't have more questions before allowing this interview.
I admire your openness and candour in being prepared to give an interview to strangers; you are prepared to balance the 'risk' of this being a potential 'hit piece' against the hope that this article will help to open the eyes of the sleeping.
I truly hope that these fresh-faced students are allowed to make an honest assessment, and to publish an unbiased article, free from the editorial slants that prevail in every other magazine or newspaper that Joe Public is encouraged to buy. Let's wait and see.
Yours, hopefully

Yes, Neil. Hopefully indeed. We shall see, but from what I've seen in the past, publications like these tend to be reasonably factual. And if the worst comes to the worst and it's a hit-piece, it has a small circulation. I don't know if they interviewed anybody else too. Maybe I should have asked.