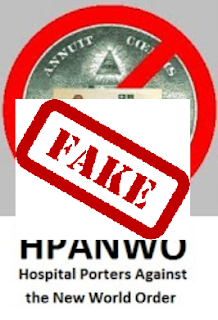 Several newspaper websites have released lists of supposed "fake news" websites. This is so viewers will know to avoid them and stick to the real news, the truthful news like the BBC, CNN, The Sun etc. The list includes Infowars, Truth Frequency Radio, Disclose TV and Breitbart... I must say I'm a bit disappointed HPANWO doesn't get a mention. Of course there is such a thing as fake conspiratorial news outlets. Recently I have mentioned Sorcha Faal, see: http://hpanwo-voice.blogspot.co.uk/2016/11/french-astronaut-ufo-witness-warns-earth.html. But of course the aim of the entire fake news scandal is to confuse and distort the news seeker's perception and discourage them from examining information from non-mainstream sources. They have been particularly targeting commercial outfits. It's important to understand the far more subtle methods of censorship that are most commonly used nowadays. They no longer simply ban things; that's far too blunt. Instead they put out the notion that something is disreputable and psychology does the rest. A while ago I wrote about a banned book I have but it was a dishonest title; it was never literally outlawed. The publisher voluntarily recalled all the copies and pulped them, see: http://hpanwo-voice.blogspot.co.uk/2011/04/ive-got-banned-book.html. In the same way nobody has banned Breitbart; however Kellogg's has announced that they will no longer be advertising on the Breitbart website because they didn't want their brand associated with that publication. As a result Breitbart have lost a major revenue source. If it spreads they might have to shut down due to lack of funds. And not a single law need be passed. Another method censors use nowadays is to declare a source's content as "hate speech". I myself have been falsely accused of that, see: http://hpanwo-voice.blogspot.co.uk/2016/08/trystan-swale-and-my-perceived-racism.html. Hate speech is defined by the dictionary as: "Speech that attacks a person or group on the basis of attributes such as gender, ethnic origin, religion, race, disability, or sexual orientation. It includes speech, gesture or conduct, writing, or display which incites violence or prejudicial action against or by a protected individual or group, or because it disparages or intimidates a protected individual or group." Yet some very influential commentators have described obviously benign statements like: "White people are not evil" or: "Women earn as money much as men" as hate speech. Most people are concerned about censorship, but do you really think we're going to see bonfires of books in the streets and guitarists having their fingers broken? It will never again be as obvious and crude as that. Modern censorship works by manipulating the mass psychology and cultural trends and norms of society. Its methods are devised by the world's greatest experts in psychological warfare and as a result we'll have to work harder to beat it, not least inside our own heads.
See here for background: http://hpanwo-radio.blogspot.co.uk/2016/08/programme-199-podcast-neil-sanders.html.
And: http://hpanwo-radio.blogspot.co.uk/2016/12/programme-214-podcast-trial-of-thomas.html.
And: http://hpanwo-voice.blogspot.co.uk/2015/06/jason-wilson-on-cultural-marxism.html.
And: http://hpanwo-voice.blogspot.co.uk/2014/02/rob-brotherton-and-psychology-of.html.
Posted by Ben Emlyn-Jones at 18:59