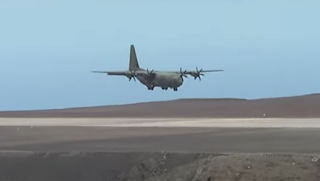 A Royal Air Force C130 Hercules transport aircraft has landed at . This is the first military flight to touch down on the new airstrip, the eighteenth aircraft to call since the airport was finished in September 2015; and it flew south from the RAF base on . The St Helena Government has released a brief statement, see: http://www.sainthelena.gov.sh/c130j-hercules-aircraft-to-arrive-this-sunday/. It is no secret that the airport on the remote island will be used for defence purposes. The goes to a lot of effort to protect its overseas territories in the south Atlantic region which are all over it. There is and its neighbours, the and the Falkland Island Dependency. There is no doubt that the airport on St Helena will be taken into account by those planning the perennial strategy to protect the Falkland Islands from Argentina following its invasion and occupation of the islands in 1982, ended by the Falklands conflict. The RAF were on a research and development mission this time, but active maritime aerial patrols will eventually come and go from St Helena. The situation with the is a strange one which I've covered before. I suspect British enthusiasm for its distant outpost has little to do with any sentimentality over the rights and desires of the Falklander people. It is more likely motivated by a concern over natural resources or even the activity of extraterrestrials, see: http://hpanwo-tv.blogspot.co.uk/2016/09/jack-of-antarctic-rip.html, http://hpanwo-tv.blogspot.co.uk/2015/01/real-zombies-2015.html and: http://hpanwo-voice.blogspot.co.uk/2012/09/bezerk-2.html. Interestingly the following blog post about the military landing written by a resident mentions that there are "conspiracy theorists" on the island. They say: "The sight of such an iconic aircraft on will no doubt be fuel for the military conspiracy theorists. I remember first hearing opinions voiced at local public information meetings ten years ago that this airport was being built for the military..." See: https://whatthesaintsdidnext.com/2016/12/18/raf-c-130-hercules-first-military-flight-lands-at-st-helena-airport/. Interestingly the crew of the Hercules aircraft have been told not to speak to the media while they're on . This means elements of their mission are classified.
See here for additional background: http://hpanwo-radio.blogspot.co.uk/2016/11/programme-212-podcast-st-helena-airport.html.
And: http://hpanwo-voice.blogspot.co.uk/2016/09/tasers-on-st-helena.html.
And: http://hpanwo-tv.blogspot.co.uk/2016/06/st-helena-airport-opens.html.
Posted by Ben Emlyn-Jones at 17:24

Why the obsession with St Helena? I wonder if they will build one on tristan da Cunha then it can all be done and dusted. Oh and build one on South Georgia where Shakleton is buried. Edinburgh of the Seven Seas is such a lovely name. Now that place needs fresh spunk!

Check out my other articles and videos on St Helena airport and I explain.