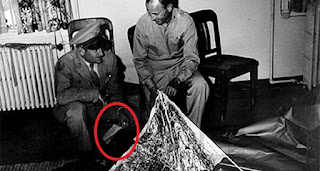 In July of 1947 an artefact from an extraterrestrial civilization came to grief on the Earth's surface and was secretly salvaged by the government. In order to shut down media interest in the issue, the authorities released a fake news story, a piece of disinformation. In one of the famous newspaper photographs of pieces of a weather balloon that the official story said caused all the panic, there is a vital clue to the deception that was not spotted for over fifty years. In the media spot in question we see Gen. Roger Ramey of the 8th Army Air Force and his assistant Col. Thomas Dubose holding pieces of the balsawood and aluminium foil that Maj. Jesse Marcel, a highly trained and experienced intelligence officer, somehow mistook for a flying saucer. Ramey is holding a piece of paper in his hand with some text on it made by a typewriter or telex machine. He was probably carrying it around with him because he was in the middle of a busy day dealing with the fallout from the Roswell Incident and had forgotten to put it down... or perhaps it was a manifestation of subconscious guilt on his part. Because the memo is so far away from the camera and the resolution of the newsprint limited, the text is illegible. It is also partly obscured by a crease in the paper and Gen. Ramey's hand. However in 2001 a research called David Rudiak claimed to have deciphered the writing using a de-blur computer system. He says it is a message from Hoyt Vandenberg who was the contemporary Director of Central Intelligence and later named as part of "Majestic 12". Not every word can be recovered, but Rudiak has interpreted it as follows:
"URGENT- HQAAF (headquarters Army Air Force), . . VANDENBERG. FROM: HQ 8TH AAF.
SUB: .
(1) FWAAF ACKNOWLEDGES THAT A "DISK" IS NEXT NEW FIND WEST OF THE CORDON. AT LOCATION WAS A WRECK NEAR OPERATION AT THE IN ADDITION... "POD"... AIRFOIL...
(2) ..."RANCH" AND THE VICTIMS OF THE WRECK YOU FORWARDED TO THE TEAM AT
(3) ...AVIATORS IN THE "DISK" THEY WILL SHIP FOR A1-8TH ARMY AMU (Air Materiel Unit), AAF.
(4) ...BY B29-ST (a Boeing B29 aircraft) OR C47. WRIGHT AF (Wright Field AAF) ASSESS AIRFOIL AT . ASSURE. ASSIST FLY-OUT  ABOUT...
(5) ...THAT CIC (commander-in-chief) /TEAM SAID THIS MISSTATE MEANING OF STORY AND THINK . SAID...
(6) LATE TODAY NEXT SENT OUT PR... OF WEATHER BALLOONS WOULD TAKE/WORK...
(7) IF PHOTOS USED AND LAND DEM/RAWIN CREWS. BETTER IF THEY ADD...
TOP SECRET."
According to Rudiak, there is a lot of uncertainty over some parts of this interpretation; other parts are much more likely to have been decoded accurately. Source: http://roswellproof.homestead.com/.

In October this year a short article was published on a UFO skeptic blog claiming there was now a new chance to de-blur even more of the Ramey Memo using a technique developed by NASA called Video Image Stabilization And Registration- "VISAR". This is today used by the police and government agencies to interpret shaky and fuzzy images from CCTV and mobile phone cameras etc, see: https://technology.nasa.gov/patent/TOP8-58. The author claims that David Rudiak is not interested in using this method and hints that Rudiak doesn't want the Ramey Memo decoded any further because it would prove his original study wrong and reveal that the Memo is not really about aliens and UFO's at . This is an assumption of Rudiak's motives on the part of the authors, and is it fair? David Rudiak has regularly made himself available for outreach projects. Perhaps the reason for his reticence was the way he was manipulated by the "Roswell Slides" promoters into stating that the placard in the museum cabinet was unreadable and then making people falsely denounce him as a fool or collaborator, see here for details: http://hpanwo-tv.blogspot.co.uk/2015/05/ufo-disclosure-2015-roswell-slides.html. Why doesn't the blog author get somebody else to interpret the Ramey Memo using VISAR; there is a version of the software on open source? Could it be because this skeptic author does not want more information revealed that does support the real UFO explanation for ? Also some people in the comments section say that VISAR wouldn't work for an image like the Ramey Memo photo anyway. Source: http://ufocon.blogspot.co.uk/2016/10/another-missed-opportunity-to-decipher.html. (What's more Rudiak did reply in the comments to this article, see: http://ufocon.blogspot.co.uk/2014/09/david-rudiak-responds-but.html?m=0) There is a physical limit on how far a very fuzzy image can be interpreted before it just becomes an exercise in pulling imaginary shapes out of random patterns by pareidolia. This was certainly the case with the photograph of the slide sent to Rudiak that was not published. It's possible that with the Ramey Memo that limit has already been reached by David Rudiak's initial study. Therefore we will never be certain about the true nature of the Ramey Memo... unless it is declassified during the ET Disclosure process that hopefully lies in the near future.
See here for more information: http://hpanwo-tv.blogspot.co.uk/2016/05/ufo-disclosure-2016-stephen-bassett.html.
And: http://hpanwo-voice.blogspot.co.uk/2015/07/area-51-extension.html.
And: http://hpanwo-voice.blogspot.co.uk/2016/02/cosmic-whistleblowers-review.html.
And: http://hpanwo-voice.blogspot.co.uk/2016/07/happy-world-disclosure-day.html.
Posted by Ben Emlyn-Jones at 20:07