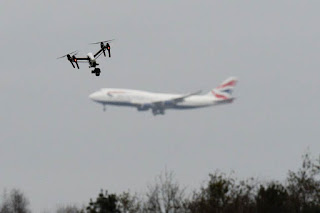 There has been yet another drone incident at , possibly the most serious yet... which goes without saying because the others were faked of course. See background links below. The air safety organization Airprox reported that on Wednesday an A320 airliner was on its final approach to land at Gatwick's single runway when it had to take an emergency course correction to avoid colliding with a drone. This happened at 1,700 feet, above the 400 foot limit for private drone operators. It was also in controlled airspace. The flight and operator have not been named and many carriers fly A320's out of Gatwick including British Airways and EasyJet. This aircraft can carry up to 186 passengers. Airprox classified this incident as a "near-miss", the second highest level of seriousness after an actual collision. This is apparently the latest in a run of three reported drone incidents at Gatwick since the big scandal in late 2018 that I reported on in detail below. Source:  https://www.bbc.co.uk/news/uk-england-sussex-49494817 (Thanks to my Facebook friend Jemma for finding this for me). This time there was no major disruption to the airport and only the flight involved was affected. This leads me to believe this was not a contrived drone threat to cover up a major systems breakdown for which the aviation industry would be liable. It is therefore probably a real drone. Alternatively it could be a UFO. As I said in the background links, the way UFO's are being reported has changed considerably in the last few years. I doubt if the word "drone" is code for a UFO in the same way "UAP" or "fastwalker" is. It might simply be a useful diversion to "prevent public panic" etc.
See here for background: https://hpanwo-tv.blogspot.com/2018/12/gatwick-airport-shutdown-part-1.html.
And: https://hpanwo-tv.blogspot.com/2019/01/heathrow-drone-shutdown.html.
And: https://hpanwo-voice.blogspot.com/2016/05/yorkshire-ufo-update-2.html.
And: https://hpanwo-voice.blogspot.com/2014/01/airline-pilot-sees-ufo.html.
Posted by Ben Emlyn-Jones at 18:03